A Stroll Through Jewish Paris 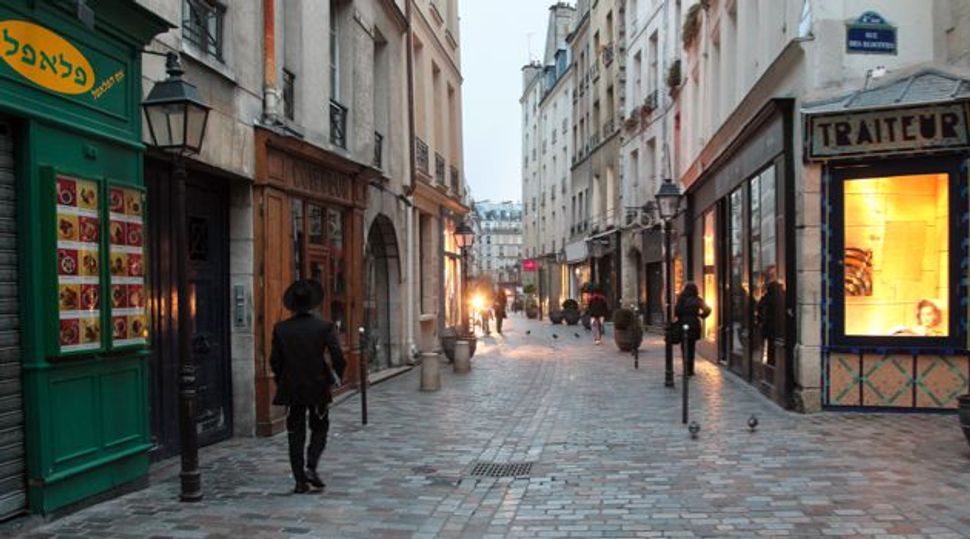 Hints of Williamsburg: A street scene in the Marais, the historic Jewish neighborhood in Paris. Image by Getty Images

I had a great idea: Take the whole family to Paris for our 50th anniversary. Even better: Make it a Jewish experience, as well. It is always a bit tricky planning grand events for a family when there are youngsters involved. In this case, a pair of teenagers — 17-year-old Corey and 13-year-old Jane, two of my four grandchildren. (The Florida contingent could not make it, for the most Jewish of reasons: Alexa, one of my other grandchildren, had to study for the PSATs.)

So eight of us met in Paris. I had used Context Travel, which is known for its walking tours, with the family for an animated and illuminating trip to Normandy. We chose it again. We were not disappointed. Oh, we had been to the Jewish area, the Marais, before, navigating its crowded, narrow streets on a Sunday, when it is most vibrant, since much of Paris is closed that day. But we didn’t know the history.

Luckily, our guide, a transplanted Philadelphian named Frank, had studied 19th-century religion in France, and although not Jewish, he conveyed his fascination and erudition of things Jewish. Suddenly, seeing those buildings (some from the 18th century!), accompanied by his expert talk, brought the old place to life.

He asked permission to enter L’oratoire Roger Fleischman, a synagogue that is part of the Roger Fleischman Foundation and also a school for religious instruction for Yiddish-speaking children. It was founded in 1931. Originally geared to the Ashkenazi wing of Judaism, it now accommodates both Sephardim and Ashkenazim.

The shamus, or caretaker, said, yes, we could come in. “Ask him any questions you like,” Frank said. “He’ll be glad to answer them.” There was a sheer curtain blocking a section of seats in the back — where the women sit. But since there were no services when we visited, the women in our party were allowed to walk to the bimah along with the men.

Because of the narrow streets and the old buildings, it is easy to imagine what Jewish life was like in Paris in medieval times. As far back as the 12th century, there were many Jews there. Even today, France has the world’s third-highest number of Jews outside of Israel, after the United States and Canada. A Jewish chronicler of ancient times gave Paris a Hebrew name: Ha-ir Hagedolah, meaning “Great City.” Great it might have been, but Jews eventually were kicked out of the country, as they were evicted from many European countries. We weren’t welcomed back until the French Revolution.

Still, it’s odd to see the city wall that blocked us off from the rest of Paris still standing. Not far from a place where folks line up for falafel sandwiches.There were hints of Brooklyn’s Williamsburg, as men, and boys, with curly locks, all dressed in black, and women wearing shaytls, or wigs, strode briskly, as usual. (Why do Hasidim always seem in a hurry? My grandfather said it was because they are always rushing to synagogue).

Frank took us deeper into the Marais, with its array of cafes and specialty shops, and the kosher restaurants around the Rue des Rosiers. And then, in the middle of the street on the Place des Vosges, on a first-floor balcony, I saw a huge menorah. I later learned that this is the Charles Liché Synagogue.

The synagogue dates only to 1963, when it was started with a minyan formed by Liché. He was part of the small Ashkenazi population that remained in the Marais after the war. We were there during Hanukkah, hence the menorah. But otherwise, the synagogue seems fairly nondescript. In a way, I thought, that is part of its beauty. We are accustomed, in the States, to fairly impressive buildings — or at least interiors. But here, in the 21st century, was a building that looked as it did so long ago, and I felt I was sharing history with my family.

But there also was a more somber aspect to our tour. Frank stopped in front of a building and told us this was one of the homes where Jews lived — and where they were taken to on the outskirts of town, pending deportation by the Germans during World War II. And how did the Germans know who was Jewish? Apparently, buildings that had multiple families also had a superintendent, or concierge. The Nazi authorities would seek out these caretakers, who would tell the invaders which of the tenants were Jewish.

On our own, we decided to go outside town, to an area called Drancy. It was a $50 cab ride — and a trip back to where remnants of the Holocaust remain. Between 1942 and 1944, almost 70,000 Jews were rounded up for eventual deportation to the camps. They lived in relatively new housing. France always looked at Jews as different, and even though most of those rounded up were citizens, many were foreign born, which, to the French, made them non-French.

In Drancy there is a bleak memorial to all those who were herded there: a statue in front of a railroad car. You know, those railroad cars that you’ve seen in documentaries that took Jews to the extermination camps. And what also is chilling was the fact that the buildings they lived in are still in use. They surround the monument and house lower-income people. On what should be sacred ground, people are simply walking and shopping and playing. For them, it is home.

On the ride back to Paris, we decided we’d end on an upbeat note. And so we stood on line, along with half of Paris, it seemed, to nosh at the iconic L’As du Falafel — the ace of falafel, which it is. It is a kosher restaurant, but virtually everyone turns out for the overstuffed falafel sandwich, which, with its tahini and crunchy shredded coleslaw and other stuff, is a bargain at about $8 (it costs you another $3 if you want to sit inside). And in case you’re not sure if you’ll enjoy it or not, pasted on the door is an endorsement from the American singer-songwriter Lenny Kravitz.

Gerald Eskenazi generated more than 8,000 bylines during a 44-year career as a sportswriter for The New York Times. A member of the Jewish Sports Hall of Fame, he now writes and lectures about travel.

A Stroll Through Jewish Paris