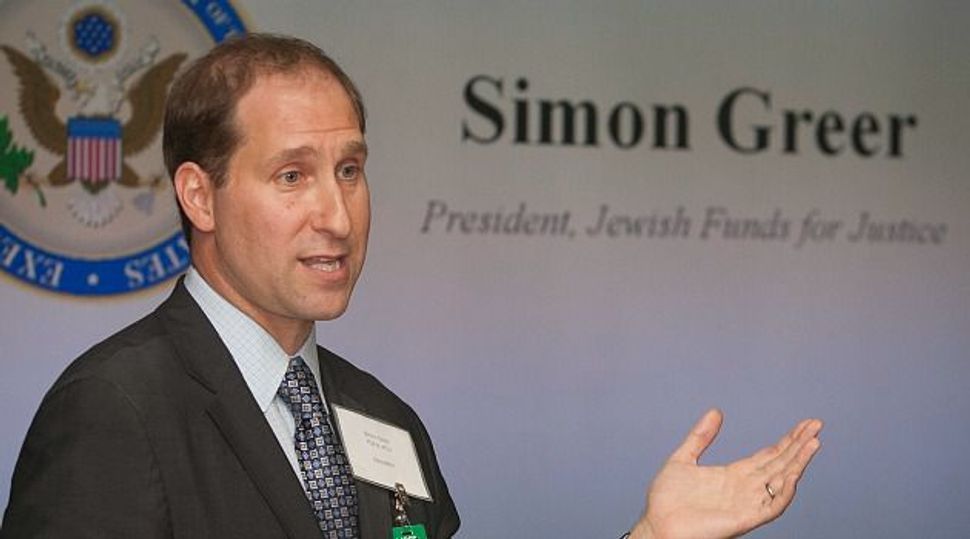 For many Jewish progressive organizations, the beginning of 2014 has been marked by a scramble to find new sources of funding, as America’s largest backer of liberal Jewish groups changed its funding guidelines.

The Nathan Cummings Foundation, which has been giving nearly $6 million annually to Jewish causes, will no longer fund organizations through a separate program for Jewish life, but will instead allocate funds solely to programs that deal with income inequality and climate change.

The shift, the foundation insists, will not cut out Jewish organizations from funding, but rather help people in the community who are working to relieve the world’s greatest problems. “Jewish groups that decided that our biggest issues of today — our water, our air, our food, jobs — that’s not the Jewish community’s problem are doing the wrong calculation,” said Simon Greer, the president and CEO of NCF. He predicted that when the shift is fully implemented in 2015, Jewish groups would end up getting more support from the foundation than they previously had under the old arrangement.

But there clearly will be winners and losers.

Greer, who formerly ran one of the major Jewish beneficiaries of Cummings Foundation grants, has spent the past few months talking to grantees, trying to explain the shift, and he said he will meet personally with leaders of every organization that applies for a grant to see how the proposal fits in with the foundation’s new vision.

Still, for many Jewish progressive organizations, the months leading up to the January 15 deadline for filing a grant application were filled with unease. For some, the shift in NCF’s funding priorities required a careful recalibration of their grant requests in a way that highlighted programs dealing with income disparities and creating financial opportunities, while leaving out programs that were previously funded.

Others, primarily liberal organizations supporting a two-state solution for the Israeli-Palestinian conflict, will have to do without the foundation’s backing once its one-year adjustment grant expires at the end of 2014. Such is the case with J Street, a dovish lobbying organization that had received $130,000 through its sister organization, J Street Education Fund. This sum made up roughly 2% of J Street’s total budget for 2012.

“I’m confident that we will be fine,” J Street’s spokeswoman Jessica Rosenblum said, adding, however, that “it’s a shame that they are choosing to disengage from this important work at this time.”

Americans for Peace Now and the Israel Policy Forum, which also work to promote a two-state solution, face a loss in their funding at year’s end, as well. For these organizations and others that may not qualify for grants under NCF’s new guidelines, the foundation is offering a one-year “exit grant” to ease the transition and allow them to find new income sources. Executives in some of these organizations who had held initial talks with the foundation believe these transitional grants could exceed even the regular annual funding received in previous years.

In general, Greer explained, the foundation no longer views promoting the two-state solution as a cause in need of its support, noting that the idea of solving the conflict by dividing the land has successfully made its way from the margins of the American Jewish world to the mainstream, and therefore groups advocating this issue can stand on their own.

Nathan Cummings, founder of the Sara Lee Corp., created the foundation in 1949; after his death, in 1985, it received most of his estate. The foundation, governed by a board made up of family members and other trustees, has an endowment of more than $400 million.

Following a yearlong strategic planning process, NCF announced last November its decision to refocus its work on income inequality and on climate change. The foundation states that its goals are “rooted in Jewish tradition and reflect Cummings’s philanthropic work, which focused both on supporting the arts and on creating a just society.” With an annual disbursement of $30 million, the foundation is one of the largest in its field and has been the leading family foundation to back Jewish progressive organizations.

The list of groups receiving grants from NCF in previous years includes almost all major players in the left wing of the Jewish organizational world, from organizations focused on a social justice agenda, such as the Reform movement’s Religious Action Center and the Jewish Council for Public Affairs, to pro-peace advocacy organizations and smaller Jewish innovators in the fields of food, agriculture and ecology.

For most, the foundation will still be a reliable source for funding. But while in previous years, Jewish organizations would go through the foundation’s Jewish life program, now they will have to tailor their grant proposals to fit the new criteria.

“We don’t expect Cummings’s role to change,” said Hadar Susskind, director of Bend the Arc Jewish Action — Greer’s former organization. “Cummings will continue to be the pre-eminent funder and driver of innovative power in the Jewish world.” Bend the Arc, a social justice oriented Jewish organization, is one of the largest recipients of NCF funding in the Jewish world, and it relies on the foundation for nearly $1 million of its $6 million annual budget.

Other organizations from the world of not-for-profit Jewish social justice organizations that Greer left behind have been adjusting their funding calculations, recognizing that programs that had previously received grants from NCF would no longer qualify, but hoping that other programs they run might actually get larger grants.

“The folks who are probably most worried,” Greer said, “are groups that relied, in my humble opinion, too heavily on having been insulated from competition.” He explained that while under the previous structure, an organization would have to prove it was “the best Jewish group” carrying out a certain mission, now it will have to answer the question, “Who is doing the best work on this?”

Minimizing the potential impact NCF’s strategic shift has on its Jewish grantees is the fact that the foundation will continue to support causes within Israel that fall under the broad definition of combating economic inequality. Most of the grants for programs in Israel will continue to be funneled through the New Israel Fund, the largest American supporter of social justice programs in Israel. NCF is expected to maintain a grant level of nearly $800,000 a year to NIF. “Their shift in priorities is aligned with a major portion of our work,” said NIF’s CEO, Daniel Sokatch.

Most programs currently funded in Israel, such as those for the empowerment of Arab Israelis, and programs for women and new immigrants, probably would still qualify for NCF support, since they are seen as increasing equality in the Israeli society. Others, such as Women of the Wall, which received $5,000 in 2011, and other religious freedom programs, will probably have to rely on other funding sources.