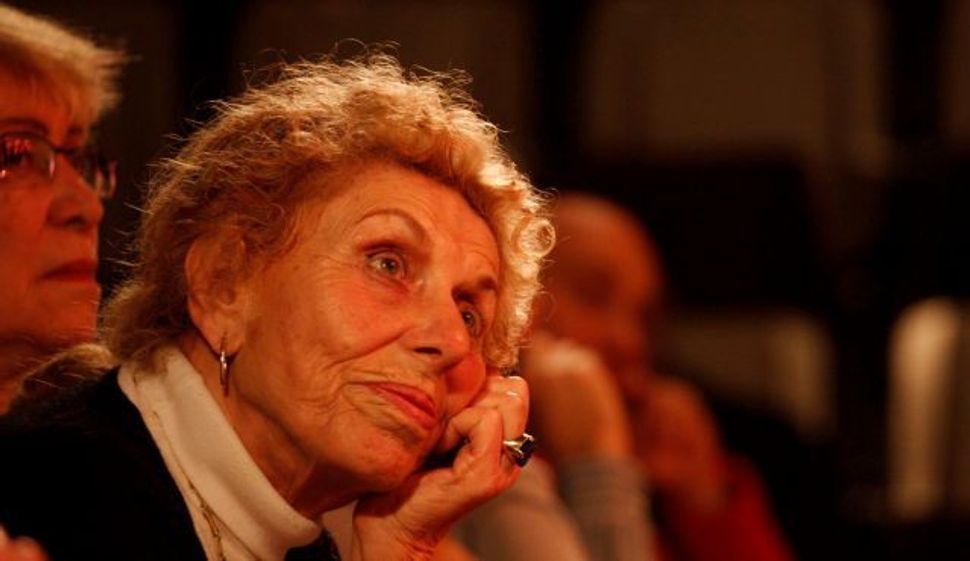 It is rarely easy to point to one person responsible for landmark social change. But when it comes to human and civil rights in Israel, there was one person. It was Shulamit Aloni who passed away last week at the age of 85.

Her official resume is deceiving: She fought in the Palmach, Israel’s elite, pre-independence Jewish underground shock troops, served in the Israel Defense Forces, studied law, became a member of the Knesset representing the Labor Party at the age of 37, served 28 years in the Knesset, five of them as a cabinet minister, and was the head of the political party Meretz.

But Aloni’s real story is that of the barefoot girl who refused to bow to any dictate, who despised the establishment, who was not bound by any party rule and who would not adhere to coalition discipline. She was the one who told people the truth in their faces and was never concerned about the consequences of her directness.

Aloni made her biggest impact on Israeli society through her media appearances, including the radio show she hosted in the 1960’s, in which she discussed human rights, and in the books she wrote. She also used the Knesset and her cabinet position as a stage to express her views.

As a politician, she was far from a success story: In 1965 the ruling Labor party brought her in as a young, intelligent and good looking woman, a protégé of the Labor establishment. But when the establishment found out who Aloni really was, they sought to push her away. The party’s nominating committee left her off of Labor’s list for the Knesset in 1969 and again in 1973.

For Aloni, this was too much. In 1973, after learning she was not included on Labor’s Knesset list, she established, within hours, her own party, the Movement for Civil Rights and Peace (Ratz), which, to everyone’s surprise, won three seats in the elections. In the two following election cycles Aloni wasn’t as lucky, and her party won only one seat.

Later, Aloni’s party won three seats again. Then, before the 1992 elections, she decided to join forces with the left-wing Mapam party and with the moderate right-wing Shinui party, to present a new, unified platform calling for peace and human rights. The new party, Meretz, won 12 seats in the 1992 election, making Aloni, for the first time in her life, the leader of a mid-size party in Israel’s Knesset.

It was an artificial union that did not last long. Shinui broke off, leaving liberal Ratz and socialist Mapam alone in the joint party.

Aloni was appointed education minister in the Labor-led government of Yitzhak Rabin. But when the ultra-Orthodox politicians could not bear her remarks and policies, and raised a ruckus, Rabin gave her the boot and entrusted her thereafter with only marginal portfolios.

Aloni gave up, but carried the insult for the rest of her life. Toward the end of her tenure she lost her position as leader of the party she founded and spent her last 18 years outside of party politics, expressing her views occasionally in the press, when matters of principle came up.

But in the face of a disappointing political record, and looming much larger, there was her standing as a public figure. Shulamit Aloni became an Israeli icon. People defined themselves based on their ideological distance from her views. Aloni won the respect of her political rivals thanks to her determination and thanks to her liberal approach, which was inclusive enough to host positions very different then her own.

It is hard to understand nowadays how little discourse on issues of rights existed before Aloni brought this issue to the forefront Israeli society. Collectivism ruled – both collectivism driven by socialist reasons and that stemming from nationalistic considerations. The right and the left both viewed the individual only as a tool in their greater struggles. Any personal demand, for raising the standard of living, for education or for housing, was seen as egoistic. People were ashamed to stand up and demand their legal rights from the establishment. And when their fury could no longer be contained, some resorted, at times, to violent acts against the bureaucrat sitting behind his desk. What did not exist was a situation in which a person knows exactly what he deserves as a matter of law, asks for it from the establishment, and either receives it or appeals the decision to a higher political or legal venue.

It was Aloni who told the Israeli public that they had rights, and that they can insist on having these rights respected, because the human being stands at the center of existence even if an individual’s personal fulfillment can only be achieved through and within the boundaries of the society in which he or she lives.