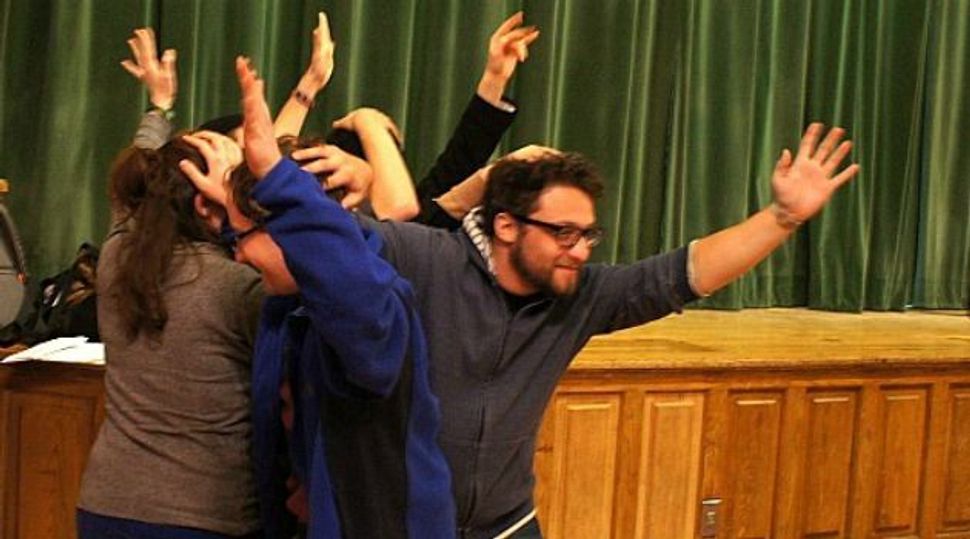 Audience participation: Young Jews attempt to form a tabernacle using their own bodies as building materials. Image by courtesy of congregation beth elohim

“I’d like to point out that you’ve all just paid $5 and come through the snow on a cold Wednesday night to attend an event with the word ‘sermon’ in the title,” David Zvi Kalman said, followed by a loud round of laughter.

Kalman was addressing the 130 young Jews who had gathered in Brooklyn’s Congregation Beth Elohim on January 22 for SermonSlam, a new performance event that bills itself as “a poetry slam, but for sermons.”

The robust turnout came as a pleasant surprise to Kalman, a 26-year-old doctoral student in Jewish and Islamic law at the University of Pennsylvania, and his collaborator, Michal Richardson, a 30-year-old producer of educational apps in New York. To read the recent Pew Research Center’s report bemoaning low engagement rates among young American Jews, you’d think it would be impossible to get so many people to set foot in a synagogue ballroom. But here they were — those sought-after, jeans-clad 20-somethings — leaning forward in their seats, riveted to the words of Torah that were pouring out of their peers’ mouths.

Like traditional synagogue sermons, SermonSlam events focus on a theme from the weekly Torah portion. This was the third such event of many more that Kalman and Richardson are planning, following a successful inauguration of the concept in Philadelphia and Jerusalem.

This time, the theme was “Tabernacle,” a structure with details that the 13 slammers put to great effect, despite the fact that its biblical description often bores young Jews. You’ve never heard the words “acacia wood” used so frequently, or with such aplomb.

Teetering on the edge between earnest and cool, Beth Elohim’s SermonSlam differed markedly from other spoken word events. For one thing, the performances were a lot more “sermon” than “slam.” The hard-edged competitive undercurrent often found at slam competitions was completely lacking at this event. The organizers were more interested in cultivating a feel-good, everyone-is-a-winner atmosphere that would allow all participants to feel welcome.

Then there was the synagogue venue, which on January 22 prompted the masters of ceremonies to caution, “Any controversial words or phrases should be in the service of the message you’re trying to get across.” But the slammers didn’t seem too hampered; many created mash-ups of ancient Jewish texts and modern secular culture, ranging from the coarse to the commonplace. References to iPhones and to Facebook popped up in the same sentence as “Kiddush.” And the hallowed Hebrew names of God, “Adonai” and “Elohim,” were uttered in the same breath as “s–t.”

That attitude paid off big time, if the diversity of the performers can be taken as a measure. The slammers spanned the gamut from the Orthodox to the self-professed Hebrew school dropouts.

Twenty-five-year-old Yaelle Frohlich’s winning performance — a religious take on Franz Kafka’s “The Metamorphosis” — told the story of a woman who wakes up one morning with the words “Holy to God” emblazoned on her forehead.

Shira Dicker, a public relations specialist, delivered her entire slam against the aural backdrop of rock songs from the 1970s. Ben Greenfield held up naked Barbie and Ken dolls, their plastic limbs entangled, to illustrate the positioning of the cherubim that hovered over the Holy Ark.

“There’s a lot of creativity in the community, more than is sometimes appreciated,” said Frohlich, who is a graduate of Yeshiva University’s Stern College for Women and identifies as Orthodox. “This was an open environment for people to be able to express that creativity.”

Jina Davidovich, a 23-year-old with a strong yeshiva background, said SermonSlam was “a perfect event” for her. After slamming for two years, she saw this as an opportunity to bring together her passion for Jewish texts and for the spoken word. She also found it unsurprising that so many young Jews would be drawn to an event like this.

“Spoken word poetry has become increasingly sexy,” Davidovich said, citing the increased accessibility provided by sites like YouTube. “When you synergize that with something that sounds boring, like a sermon… it’s an ancient tradition that we’re now embracing and making our own. It’s for the people, by the people. That feels exciting to those of us in our 20s and 30s.”

The Charles & Lynn Schusterman Family Foundation, which gave SermonSlam a $1,000 start-up grant from the foundation’s Make It Happen program, is just one of several Jewish philanthropies now recognizing that grassroots-initiated, culture-jamming projects have a unique power to attract young Jews.

“Projects like these reflect who they are, not just who we would want them to be,” said Seth Cohen, the foundation’s director of network initiatives. He added that Make It Happen is “very much a response to the Pew report.”

Other projects, like artist fellowship program LABA and cultural workshop series Tent, have already begun to apply the model that SermonSlam is now replicating.

“I don’t think interest in Judaism is declining,” Richardson said, “but I think the form it’s taking is changing.”

Kalman hopes that SermonSlam will help Jewish Americans, and Americans in general, see the beauty of the Jewish discourse being produced. To that end, he and Richardson upload each SermonSlam online, both as a video and as a podcast. In the upcoming months, the project will head to a dozen more cities, from Berkeley, Calif., to Toronto to Tel Aviv, with the eventual goal of holding an event somewhere in the world at least once a week.

“I want to change the public understanding of Torah,” Kalman said. “I want it to be viewed as something that is actually quite vibrant — because it is.”