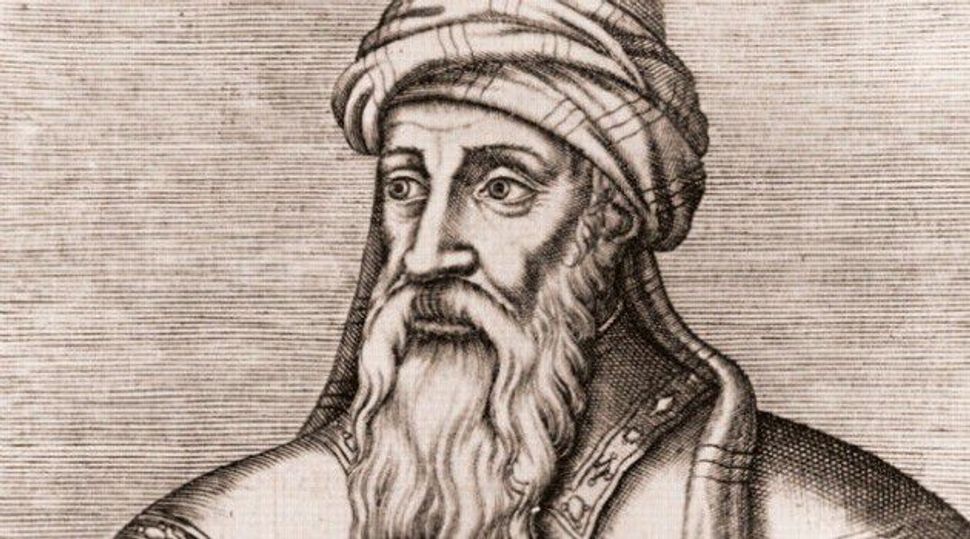 Who Was the Sagest of Them All: Maimonides presented a vision of Judaism that was traditional, yet encouraged philosophical rigor. Image by Getty Images

Maimonides is trending these days. The 12th century sage, once confined to musty tomes and talmudic study halls, is being brandished in the opinion pages of The New York Times, cited on the airwaves in “This American Life,” and featured in Dara Horn’s latest novel. By some measures, Maimonides is at the height of his popularity. This is no mean feat for a teacher whose most famous works were written around the time of the Norman Conquest and who mostly concerned himself with Jewish ritual law and Aristotelian theology. But a group of scholars who recently convened at the University of Chicago think they know why Maimonides has captured our attention of late — and more importantly, why this attention is deserved.

Twenty of the foremost Maimonides scholars gathered for a conference celebrating the 50th anniversary of the groundbreaking edition of Maimonides’ “Guide of the Perplexed,” translated by Shlomo Pines from the original Arabic into English. The professors give Pines the lion’s share of the credit for reviving Maimonides and making him relevant to our times. By taking Maimonides seriously as a writer, and translating the “Guide” in an exceptionally literal way, Pines transformed the book into a text that philosophers could grapple with, rather than dismiss as the archaic arguments of an obscure Jewish theologian.

“You can’t get [Maimonides’] subtlety without absolute attention to word choice,” Horn, who did not attend, told the Forward in a phone interview.

Once Maimonides’ arguments were newly presented, they became relevant once more to many different groups — though sometimes for contradictory reasons. For Orthodox rabbis like Joseph Soloveitchik, Maimonides (also known as the “Rambam,” an acronym for Rabbi Moshe Ben Maimon) presented a vision of Judaism that was completely traditional yet encouraged philosophical rigor; for secularists like historian of philosophy Leo Strauss, who helped write the translation, the “Guide” challenged the logical coexistence of science and religion.

Ironically, by making Maimonides’ text more clear and accessible, Pines had left him more open than ever for an endless stream of conflicting interpretations.

As the conference made abundantly clear, these conflicts over how to read Maimonides are not new. Within nine years of the first Hebrew translation of the “Guide” in the 1100s, another interpreter weighed in with his own translation, which inspired vicious intellectual battles across the Jewish world, pitting the literalists who flocked to Samuel ibn Tibbon’s translation against those who favored the creative reading of Yehuda Al-Harizi.

As the professors at the conference explained, the next centuries saw an onslaught of variant translations and interpretations. The “Guide” was burned as heresy in Southern France and revered as a theological masterpiece in Yemen.

And it wasn’t just the Jewish community that was split over what to make of the book. Richard Taylor of Marquette University argued that the work of Thomas Aquinas, the most important Christian theologian of the Middle Ages, is suffused with Maimonidean arguments, while Luis Negrón of Harvard showed that when the “Guide” appeared in Christian Spain in the 15th century, the translation was sharply critical of its theology — and even that manuscript is covered with anonymous annotations lambasting the translator.

The conference brought the tradition of acrimony and passionate reading to the present when Tzvi Langermann of Bar Ilan, a student of the famed Maimonides translator Rabbi Yosef Kafah, defended his teacher’s translation and attacked Pines’s style and lack of familiarity with the subtleties of Arabic. No matter the era or thinker, Maimonides can be read in a startling variety of ways.

By drawing out this history of conflict and confusion over the “Guide,” the conference pinpointed one of the central tenets of Maimonides’s thought that we’ve begun to understand only in the past 50 years: Maimonides’ purpose was to reach students at all levels — to the majority of students, he endeavored to instill an acceptance of a particular set of dogmas, and to the strongest among them, a method of skeptical inquiry. As Leo Strauss famously argued, Maimonides made a brilliant educational move by writing the “Guide” in such a way that it offered a valuable surface reading as well as a subtle esoteric reading — “apples of gold in settings of silver,” as Maimonides wrote, quoting Proverbs.

Maimonides, according to Stern, aimed at uncovering the deepest secrets but believed that human knowledge is ultimately limited. As Maimonides put it in his introduction to the “Guide,” “I do not say that this Treatise will remove all difficulties [even] for those who understand it…. You should not think that these great secrets are fully and completely known to anyone among us.”

He illustrates this by an analogy to a storm in the dead of night: Everyone is cloaked in darkness, and even those that glimpse their world in occasional flashes of lightening never see the whole world. This analogy applies equally to our knowledge of the natural world and, because Maimonides conceived of God as totally beyond human comprehension, even to revelations of divine truth.

There may be many interpretations of Maimonides, but “what’s unambiguously there is an awareness of the limitations of knowledge,” noted Horn. To claim otherwise — to assert mankind’s special knowledge or power — is, according to Maimonides, a form of idolatry.

Despite the seeming futility of attempting to fully access the great secrets, Maimonides never gave up on the pursuit of wisdom, or of education: More than almost any great philosopher, Maimonides devoted every spare minute to teaching.

“My duties to the sultan are very heavy,” he wrote to ibn Tibbon. “I leave for Cairo very early in the day, and… I do not return [home] until the afternoon… I find the antechamber filled with people, both Jews and gentiles… a mixed multitude who await the time of my return.” In spite of this exhausting schedule, Maimonides spent his Sabbaths teaching. “The whole congregation, or at least the majority… come to me after the morning service, when I instruct them as to their proceedings during the whole week; we study together a little until noon… Some of them return, and read with me after the afternoon service until evening prayers.”

As a full-time physician and teacher, Maimonides understood the importance of persevering in contemplation despite the abundance of distractions, and the provisional nature of all human answers. Whether those distractions come from Twitter or from tending to the Sultan, whether our uncertainties are ethical or scientific, whether we’re unlearned or a towering scholar, he insists that we forge ahead in our pursuit of the truth, and of a virtuous life. It’s the kind of brash optimism in the face of uncertainty that keeps the ideas of this 12th-century philosopher pulsing on the airwaves and through the university halls, that drives home his central idea — that we must be, not just a start-up nation, but a nation of philosophers.

A former Forward fellow, Doni Bloomfield is completing his Bachelor of Arts in economic history at the University of Chicago.