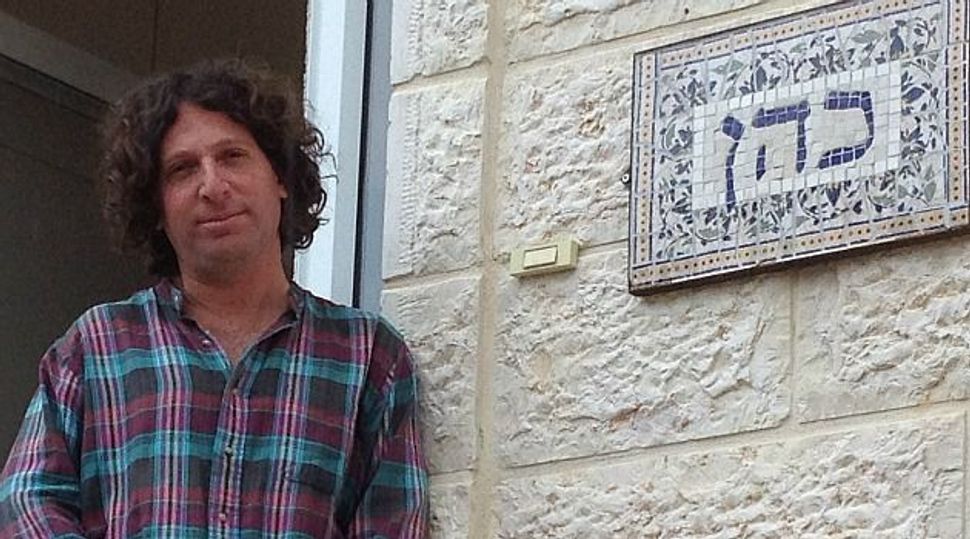 Eliaz Cohen is a second-generation Jewish settler in the occupied West Bank — and that’s where he’s determined to remain.

Sitting in his kitchen in Kfar Etzion, between Jerusalem and Hebron, the yarmulke-wearing settler says that he wants to see a two-state solution and to see his home become part of the Palestinian state, with him in it.

The idea that some settlers could stay put after a peace deal in which territorial compromise would leave some Israeli Jewish settlers within the boundaries of a new Palestinian state has riled the Israeli government since late January, when Prime Minister Benjamin Netanyahu suggested it. In fact, Netanyahu’s government coalition was at one point on the verge of collapsing over anger stemming from this controversy.

Naftali Bennett, leader of the pro-settler Jewish Home party, which is part of the coalition, accused Netanyahu of “moral confusion” and cited murders of Jews at the hands of Palestinians to explain the problem with the prime minister’s suggestion that some settlers could live under Palestinian rule.

Arguments like Bennett’s make the conversation in Cohen’s kitchen all the more surprising. His settlement, Kfar Etzion, fell under Arab rule once before — and all but four residents were murdered when it did. That 1948 massacre is famous, and for most of the settlement movement, the message of Kfar Etzion’s re-establishment after the Six Day War is that it must always remain Israeli.

But Cohen said that even if Jerusalem and Ramallah were to reach a peace deal that annexed Kfar Etzion to Israel, he would wish they hadn’t. “I even prefer, to be honest, if we give [the Palestinians] a fair geopolitical space for their newly independent state and not cut in the middle,” he told the Forward.

Embracing a perennial Palestinian demand — one that riles Israel — he said, “The basis of 1967 lines could be the official borders of two states.”

Cohen believes that as soon as Jews in the West Bank cease to be viewed as occupiers imposing their rule and become instead a minority needing protection, they will be safe. After reciting a blessing on a cup of coffee and taking a sip, he said: “Many friends tell me that I’m naive and I’ll find myself hanged or slaughtered, and I ask them when their last time visiting a Palestinian was. I do it all the time, and when you are visiting an Arab person with his invitation, you can be sure of your life and safety 100%.”

Settlers like Cohen are few and far between, perhaps only a few hundred, but they have an ear in both Jerusalem and Ramallah. The main proponent of the idea was the late Menachem Froman, a co-founder of the Gush Emunim West Bank settlers’ movement and the maverick chief rabbi of the Tekoa settlement. He spoke to Netanyahu on the subject two years ago, and is believed to have caused him to entertain the idea.

But critics point out that getting the Palestinian Authority to allow settlers to remain in the West Bank if and when a Palestinian state is established is only part of the problem. The other part would be getting the P.A. to accept the land expropriations Israel implemented that often took land out of the possession of Palestinian towns or private owners to provide the settlers with their current homes.

P.A. President Mahmoud Abbas said last year that in a peace deal he would “not see the presence of a single Israeli, civilian or soldier, on our lands” — a pointed reference to his perspective that the West Bank, as a whole, should belong to the Palestinian nation and an apparent rejection of those expropriations.

Cohen’s vision stops short of Khatib’s suggestion; it doesn’t involve him taking Palestinian citizenship. “I could remain an Israeli citizen and live in Palestine,” he said confidently, elaborating that he would pay taxes to Palestine and observe Palestinian law but vote for Israel’s parliament, not Palestine’s.

He wants a similar situation on the other side of the Green Line, where Palestinians could live, “even refugees,” observing Israeli law but voting in Palestine. In one fell swoop the two sides will have solved the refugee question and “dismantled the demographic bomb” that is said to be facing Israel as a Jewish state.

Is his idea a pipedream? He says not, citing two reasons. First, similar citizenship arrangements are already in place in the European Union, where people live where they want but vote in their country. And second, he believes that the idea of moving up to 300,000 settlers is unrealistic. Israelis and Palestinians “are just so mixed, even after Oslo, which tried to separate us,” he argued.

Cohen, a 42-year-old social worker and poet, is settler aristocracy. He grew up in Elkana, which his father established with other activists in 1977, and followed the classic settler-activist path, protesting the withdrawal from Sinai as a child, and getting arrested when trying to derail the Oslo peace process of the 1990s as part of a “gentle but underground” group.

While heartbreak at seeing homes destroyed pulls him in one direction, memories of his early childhood pull him in another. In Elkana’s early years, before the first intifada, the settlement had no fence, relations with Arab neighbors were good and he studied Arabic at school. All this changed the moment a hand grenade was thrown into the settlement in 1981, but he believes that the friendship can be revived. “If they hadn’t stopped the Arabic lessons and if they hadn’t built the fences, we could have allowed ourselves to recognize and fight the fears and not let the fear manage us, ” Cohen said. He hopes that upon the signing of a peace deal, settlers would be allowed to stay in their homes, and those who live on privately owned Palestinian land would compensate the owners fairly.

Pechenik wants to become something of a Palestinian chalutz, or pioneer. Unlike Cohen, he doesn’t want an E.U.-style citizenship arrangement, but actually thinks that settlers who want to stay could become Palestinian citizens. Maybe he could become a Member of Parliament, he added, half-jokingly.

“I know that we are a small minority [of settlers] who would want to stay under a two-state solution, but if more people say they will, Palestinians will understand and accept us,” commented the 40-year-old teacher and head of the settler pro-peace group Land of Peace. “I don’t say, ‘I want to stay because I want to assert my ownership.’ I will hope to stay and build a sustainable peace.”

Practical, maybe. Outside his comfort zone, definitely. Pechenik grew up in the hard-line settlements of Hebron and Beit El and was, by his own admission, “extreme.” Then, in 1996, terrorists killed two of his friends in Beit El. He said his “natural response was revenge, but then I started thinking and asking why, and decided that it’s not a problem of there being enough space.”

Not only did the huge change in his political orientation lead him to his current opinions, it also presented him with a cultural challenge.

Neve Daniel, where he now lives, is a small village of about 2,000 people, almost all of them Orthodox Jews like him. Most, he concedes, would leave if it became part of a Palestinian state. He foresees the remaining Jews clustering into a neighborhood, with Palestinians inhabiting the rest of the homes. “It wouldn’t be easy for me,” he said. “All my life I have lived in a closed Jewish community.”

He thinks that cultural rights, like security, can be guaranteed, and he looks forward to a day when the Palestinian Ministry of Religion will assign a budget to maintain the eruv — a religious boundary that allows Orthodox Jews to push strollers on the Sabbath — in Neve Daniel.

Pechenik estimates that if Israel does pull out of the West Bank and gives settlers the option to stay, not more than 10,000 settlers will choose to do so. The currently-fringe nature of his idea has led some friends to shun him. “A few of them have stopped talking to me; a few understand me and think it is good,” he reported. His nine siblings, six of them settlers, vary in their opinions — and a brother and sister-in-law who were evacuated from Gaza in 2005 are among the most understanding. “They said that after their experience, they learned what it is to be refugees and now have more understanding of the other side,” Pechenik said.

In Ofra, northeast of Ramallah, a father of the settlement movement said that he’ll stay if he finds himself in Palestine — but took a far more combative attitude on the matter than Cohen and Pechenik.

Yehuda Etzion, a founder of the Gush Emunim settlement movement, thinks that a decision by Israel to withdraw from the West Bank would be a “sin,” prohibited “according to the Torah and all we have learned from our ancestors.” This land, after all, is the “the heart of Israel,” he asserts.

But he would be prepared to remain in his home, and he estimates that one in five Ofra residents would follow his lead. “We want to stay in the Land of Israel even if it is in the hands of our enemies,” he said, adding that the matter of which citizenship they would hold is an open question.

Etzion, a 62-year-old whose main pursuit is lobbying for more Jewish visiting rights on the Temple Mount, considered Froman naive, and told the Forward, when discussing the possibility of life under Palestinian rule, “I don’t think there will be harmony, and I don’t think it will be the Garden of Eden.” Furthermore, he has “no doubt at all” that there would be violence against West Bank Jews — but nevertheless he would not expect Israel to retain a security presence to protect them.

Etzion, who was in the Jewish underground that planned to blow up the Dome of the Rock in the 1980s, declined to discuss whether he foresaw Jews who fall within Palestinian borders having their own militias.

Questioned further about security, he had no clear answers, and said dryly of Palestinians, “If they come and kill us on the first night, we’ve solved the problem because we’re not alive.”

While Cohen and Pechenik’s preparedness to live under Palestinian rule stems from hope, Etzion’s stems from despondency. He started to become disillusioned with the Israeli government when it withdrew from Sinai, and he thinks that a two-state solution would cement what he would consider the government’s ideological bankruptcy. “I think that the State of Israel, the minute it leaves Judea and Samaria, has killed Zionism itself,” Etzion said.

Zionism would be “more or less over,” Etzion explained, adding that in a “post-Zionist era” it wouldn’t be ideologically preferable for him to live in Israel rather than in Palestine. And if this time comes, and a Palestinian flag flies over Ofra, “I’m prepared to do all that is necessary to be able to stay here.”