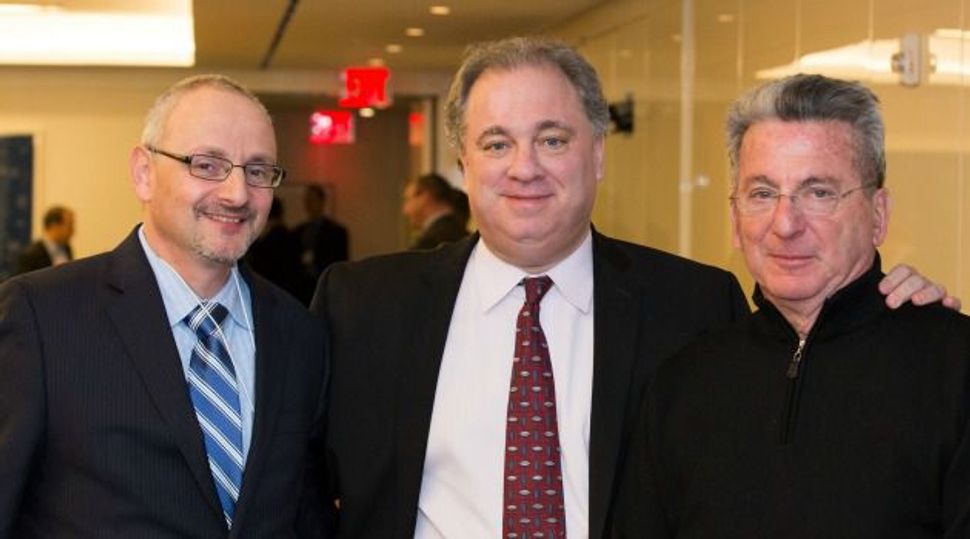 The event in New York City in late January looked more like a pitch meeting for venture capitalists than the usual Jewish philanthropic gathering. Several dozen businessmen and women holding booklets with financial balance sheets listened attentively as 17 heads of Jewish not-for-profit organizations took the stage and spoke for 20 minutes each, as if their futures depended on it.

The organizers of this first-ever Israel Summit were attempting to copy the style of venture capital summits, where entrepreneurs try to win over deep-pocketed investors, and adapt it to the world of Jewish giving, which has struggled to attract new donors.

“We’re trying to engage powerful business leaders, leaders on Wall Street, on their terms,” said Joseph Hyman, president of the Center for Entrepreneurial Jewish Philanthropy, which organized the summit.

“I just mirrored what is done in business,” he said of the new initiative. “What we pulled off is the same as in the venture capital world.”

But while this model excites some, it leaves behind more traditional Jewish organizations that provide the kind of social services not always attractive to high-roller donors. And, in the case of the January meeting, it also excludes those whose politics didn’t match the largely center and right-wing non-profits invited to pitch.

“I can’t see how this model will serve us,” said an executive in the federation system who asked not to be named. “We can show proven success, but we’re not only about innovation.”

This was not the first attempt by a Jewish organization to streamline interaction between donors and grantees, but it was by far the most intense effort to date. Despite a snow storm that shut down the city a day earlier, donors representing 65 foundations and organizations arrived in Manhattan on January 23 and sat through a day and a half of presentations by select groups working on Israel-related activity in the fields of media, campus and policy.

Participants were requested to submit a short summary of their activity and desired funding, all formulated in a way business executives can understand: organizational budget, breakdown of requested funding, and revenue categorized by the size of donation. Together these summaries made up a book for prospective donors to glance through as they listened to the presentations.

Organizers have not made the book public, but the Forward obtained a copy. It provides a fascinating snapshot of non-profit aspirations.

The Israel Project, a group focused on media education, asked for more than $1 million to set up a “war room,” a rapid response operations center to react to “Israel’s detractors who are successfully demonizing and shaping public perceptions.” The Jerusalem Press Club, a new media hub in Israel’s capital, requested funding to bring journalists to visit Israel. Fuenta Latina, an organization working with Latino and Latin American journalists, presented a program for helping Spanish-speaking reporters cover Pope Francis’ visit to Israel in May.

“It was an incredible experience,” said Leah Soibel, Fuente Latina’s founder and executive director. “The model really proved effective for us.” As a new organization, the summit in New York gave Fuente Latina a rare opportunity to reach out to funders it never would have been able to access, Soibel said.

A selection of “pro-Israel” groups working on college campuses were invited to pitch. The Israel on Campus Coalition presented a program aimed at faculty rather than students. The Hasbara Fellowship said it wants to train pro-Israel campus leaders. StandWithUs, a Los Angeles based organization, asked for funding for a social media outreach program.

Policy-oriented organizations also were represented. The Foundation for Defense of Democracies, a conservative-leaning think tank; ELNET, a European pro-Israel political advocacy organization; and NGO Monitor, an Israeli watchdog group that has campaigned against foreign funding of Israeli liberal non-profits, all asked for money. The Washington Institute for Near East Policy sought funding for public opinion polling of Palestinians, Israelis and Egyptians.

CEJP’s idea is to focus on the program rather than on the organization. For donors, this can provide assurance that the impact of their contribution will be significant and measurable. But it also opens the door for well-funded groups, such as The Israel Project, to pitch new donors while struggling organizations were never invited into the room.

Standing out in the list of presenters was Christians United for Israel, an evangelical group that boasts 1.6 million supporters. Its controversial leader, Pastor John Hagee, asked for funding for programs aimed at Christian millennials and for establishing a presence on Capitol Hill. CUFI is known for its hard-line approach to the Israeli–Palestinian conflict and has not endorsed a two state solution.

Absent from the event were progressive pro-Israel organizations. Hyman said that his group “tried very hard to give a potpourri of different opportunities” but that the list reflected the wishes of the donors attending. He did not rule out the possibility that future summit meetings will include other donors and more liberal organizations.

CEJP was established in 2005 and has since facilitated $70 million in donor gifts for Jewish organizations. Hyman sees Taglit Birthright as a model, arguing that it has brought new money into Jewish philanthropy without detracting from other programs.

Mark Charendoff, former head of the Jewish Funders Network and now president of the Maimonides Fund, agreed. “I don’t think it is a zero sum game,” he said. “Very few donors are at their absolute capacity and if you expose them to new ideas, they’ll give more.”

But others fear that this tactic will cause donors to gradually shift away from the bread-and-butter social safety network programs provided by the federations, to specific programs tailored to their individual wishes. Federations bring in some $700 million a year, but the number of donors is shrinking.

Hyman doesn’t see a conflict. “The federation system is the moral compass of the Jewish world,” he said, calling it “the most powerful network of philanthropist in the Jewish community.” But, he added, “the fundraising mechanism needs to be reengineered. It’s not a debate, because the donors are voting with their choices.”

The key, he said, is engaging with the donors. They may be attracted to Jewish philanthropy through a small innovative program on campus, but once the connection is made, they’ll become attentive to other needs. CEJP states that its funders come in with a clear commitment to bring in new dollars to the system, not to shift their contribution from one cause to another.

Jennifer Laszlo Mizrahi had worked with Hyman when she headed the Israel Project and praised his matchmaking capabilities, bringing together top donors and vetted Jewish organizations.

“He works with incredibly high net worth individuals who are incredibly picky about what they want to do with their money,” she said. Laszlo Mizrahi recalled that Hyman matched The Israel Project with donors who had not been involved in Israel programming and who gave gifts worth hundreds of thousands of dollars each.

“He doesn’t work for the charities, he works for the philanthropists,” she said.

One such philanthropist who attended the summit was Michael Leven, president and COO of Las Vegas Sands. “It is a dramatic advantage for funders,” he said. “All the organizations are good, but as a funder, I want to fund a program where you can see the needle move,” he added.

Deals were not finalized at the summit, but initial understandings were reached on funding at least eight programs totaling more than $1 million.

Hyman believes this number is only a beginning. In an email to supporters he estimated that fundraising through this new model could bring in another $100 million. The New York communal professional, who spent much of his career in the federation system, spoke in almost prophetic terms when describing this as a “game changing” moment in Jewish philanthropy.

“We have to stop playing defense,” he said. “The money is there. We’ve got all the right values; we’ve got the right state of mind. The Jewish community is heroic, and we have the talent. What we need now is the belief that we deserve the $100 million gifts.”