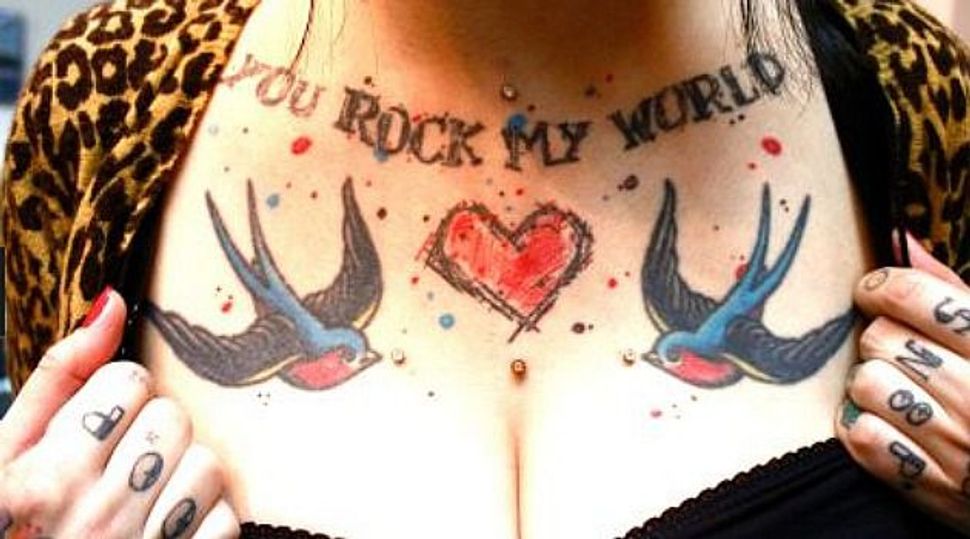 (Haaretz) — Hamutal Song would turn heads no matter where she lived. But walking the streets of Israel with two blue birds etched onto her chest and the words “you rock my world” in caps above them, she’s rarely ignored. As she puts it, decorated head to toe in colorful tattoos, “not a lot of people pass me by on the street and have nothing to say.”

Yes, branding one’s body with permanent ink is one of the strongest forms of self-expression. But that may be even more true in Israel. After all, this is the Jewish state, and Jewish law forbids tattoos. Yet as tattoos become more popular here, it’s clear Israeli culture doesn’t always mirror Jewish culture.

According to Israeli sociologists and tattoo artists, tattoos have become much more common here over the past decade. But because of the unique cultural and religious backdrop – the legacy of the Holocaust as well as Jewish law – they’ve taken longer to go from taboo to trendy.

Oz Almog, an artist, professor and author of “The Sabra: The Creation of the New Jew,” has studied the evolution of tattoos in Israel. According to Almog, Israelis’ adoption of Western values and American trends is a main factor behind the shift in attitudes toward tattoos.

“For its first two decades, proletarian and resource-poor Israel set store by a modest, ascetic and frugal lifestyle, and rejected expressions of aesthetic refinement and showing-off,” Almog says.

As American artists and musicians turned body art into a stamp of cool in the 1970s and ‘80s, tattoos gained popularity in America. It took more than a decade, according to Almog, but the trend hit Israel, as so many American trends do. Tattoos became a prime example of modern Israel’s desire to be more Western.

“The tattoo fad symbolizes Israel’s transition from an austere and khaki-clad society that played down the importance of aesthetics to a society that pays homage to beauty, splendor, ornamentation and glitter,” Almog says.

That transition is perhaps nowhere more evident than in Tel Aviv – Israel’s capitalist, cosmopolitan answer to Jerusalem’s history and tradition – where most of Israel’s inked bodies can be found.

Song, a 36-year-old film student at Tel Aviv University, has lost count of her tattoos, but she knows she got her first one 20 years ago. At the time she was one of only two students in her high school to be inked.

“We were 1,500 students and only two had tattoos,” she says. “I think today it’s unheard of – all the kids have tattoos now.”

More current than the Bible

Oshik Vaturi, who also lives in Tel Aviv, says that when he got his first tattoo in 1995, he became the black sheep of his family.

“Back then it had the context of being a criminal, being a bad boy,” says Vaturi, 37, who grew up in a traditional Jewish family but doesn’t consider himself religious. “Today I might be able to find five people without tattoos on the beach.”

For Israelis, like people everywhere, tattoos are a way to express their uniqueness. Sivan Perets can no longer imagine life without her four tattoos.

“My tattoos are who I am; each one has its own story,” she says. “When I see someone with tattoos and piercings, I want to talk to them. People without tattoos seem very boring to me.”

As Song puts it, she has always had her own identity, and her tattoos celebrate that. “At some point in my life I realized that you need to create your own space and your own thing,” she says.

And to your typical tattooed Israeli, there’s nothing contradictory about ink and the more traditional values of the Jewish state. “I don’t think tattoo society in Israeli culture is ironic,” says Vaturi. “I think that keeping the traditions of the Bible – which was written 6,000 years ago – in 2014 is much more ironic.”

One sign of the mainstreaming of tattoos here is the Israel Tattoo Convention; last year the first annual convention drew about 1,000 people. At the second one last weekend in Tel Aviv, nearly 4,000 Israelis showed up to give or get tattoos, or to just take a peek.

Shay Daudi, the owner of a Tel Aviv tattoo parlor and cofounder of the convention, hopes the event will help make Israel an international center of tattoo culture.

“A lot of people in Israel are not religious and they like tattoos,” he says. Referring to the country’s tattoo enthusiasts, most of whom aren’t observant Jews, he notes, “We don’t care about religion.”

Religion aside, a frequent problem is addressing the subject with Americans. Tell an American Jew you might get a tattoo and the conversation can get morbid.

“Will you be able to be buried in a Jewish cemetery?” one might ask. If you ask an Israeli with a tattoo that question, expect to be considered an ignoramus.

While Jewish law prohibits permanent body art – because it was a pagan practice – it doesn’t forbid Jews with tattoos from being buried in Jewish cemeteries. “It sounds like something Jewish parents told their kids to prevent them from getting a tattoo,” said a source at the Chief Rabbinate who asked not to be named.

Still, despite the move into the mainstream, tattoos can be a challenge in Israel. “I know a lot of people who have problems getting jobs … or problems with their families,” says Daudi, who owns one of Tel Aviv’s 19 tattoo parlors.

Song says she has been turned down for many jobs because of her inked-up body. After several interviews, prospective employers told her she was great for the position but her vibe was wrong.

Perets, 21, has had a difficult relationship with her parents since she got her first tattoo at the age of 18. After one tattoo, they kicked her out of the house, she says. After another, they visited the studio of the artist and told him they’d break his fingers if he tattooed their daughter again.

There’s one more hurdle preventing tattoos from being fully accepted in Israel. For many Jews, especially the older generation, tattoos represent the Holocaust, not art. The Nazi branded tattoos on the arms of Jewish concentration camp inmates.

“Tattooing during the Holocaust was an enormous instrument of degradation,” says Michael Berenbaum, a rabbi and Holocaust scholar who played a key role in the creation of the United States Holocaust Memorial Museum. “Survivors were always told that you no longer have a name, your name is now your number. And they found tattoos to be one of the indelible marks of depersonalization.”

Tattoos were also celebrated by their abusers. “When you were sworn in as part of the SS, you were tattooed with the mark of the SS,” notes Berenbaum.

Yet for younger Israelis, the Holocaust is more distant; the younger generation doesn’t associate tattoos with concentration camps. To Daudi, the fact that Israelis are embracing tattoos to express their identity is the perfect response to the weaponization of tattoos against an earlier generation of Jews.

One day, when a Holocaust survivor entered Daudi’s tattoo shop, she showed him the numbers on her arm and asked him how he could do what he does. He didn’t know what to say, but then he told her to look at it in a different light.

“You got it by force, and for a bad reason, and now your grandchildren choose to do it and they love it,” Daudi says he told the woman. “It’s like closure from a bad thing to a good thing.”