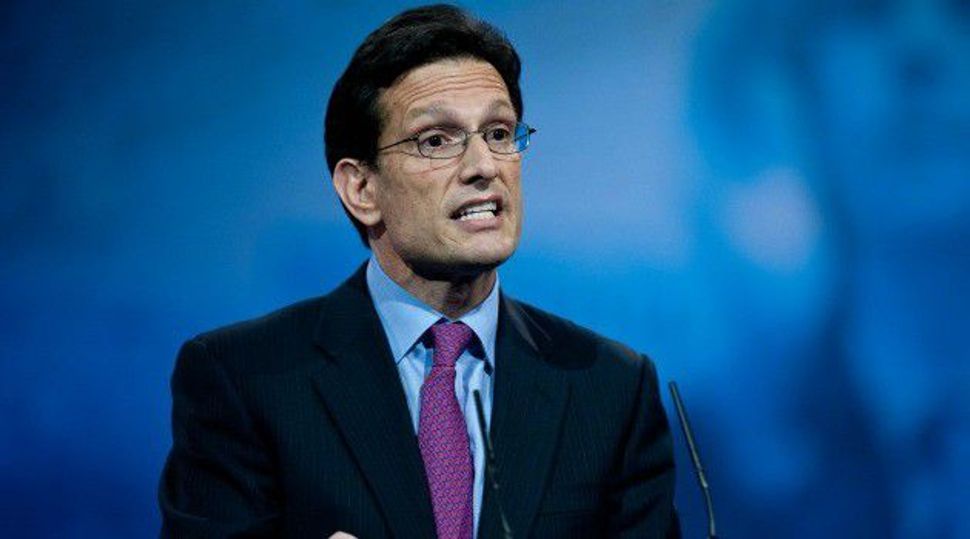 Grandson of Immigrants: Eric Cantor, the GOP House Majority Leader, has yet to take a stand on immigration. Image by Getty Images

The organized Jewish community is known for its impressive bipartisan clout when advocating issues relating to Israel. But when it comes to domestic affairs, the community suffers from a lopsided lack of leverage on the Republican side.

Some Jewish activists believe that they may have found a pathway to the GOP side of the aisle. Their tactic: play the Jewish card on the sole Jewish Republican in Congress, House Majority Leader Eric Cantor. In a communal event held in Cantor’s hometown of Richmond, Va., on February 16, a group of pro-immigration Jewish activists, including past donors to Cantor’s campaigns, tried to send the No. 2 Republican in the House a message that immigration reform, shelved by his own party, is a Jewish issue he ought to be taking on.

“It was a strategic choice,” said Abby Levine, director of the Jewish Social Justice Roundtable, which organized the event. “We strategically chose Richmond because of the importance of Eric Cantor.”

Cantor could be a key person for immigration reform. House Speaker John Boehner made clear that the issue is off the table for this legislative year, and Cantor, who has avoided expressing his views on the details of the Senate bipartisan immigration bill, is viewed by some, including those of the Jewish community that largely supports reform, as the only senior Republican open to change on the issue. But past experience has shown that Cantor, despite his close ties with Jewish leadership, has not been receptive to the community’s domestic agenda.

Gathered at the Richmond Jewish Community Center on a snowy Sunday afternoon, some 70 members of the city’s Jewish community listened to immigration stories that recalled to the audience the role immigration played in American Jewish history. The presentation stressed immigration reform as an issue in line with core Jewish values.

Jay Ipson, wearing a cowboy hat decorated with a menorah symbol, spoke of his family immigration from Lithuania after the Holocaust and of the tragedy of closing immigration gates during the war; Janet Slipow Meyers, whose parents came from Russia in the early 20th century, told her story, and Roben Farzad, a successful Bloomberg writer who came with his family from Iran after the Islamic Revolution, represented the younger generation of Jewish immigrants to America. Joining them was Felipe Marroquin, a non-Jewish resident of Richmond. Marroquin burst into tears while sharing with the audience the story of his wife of 20 years, who was deported to Guatemala.

While not discussing the issue directly at the event, organizers have highlighted in their publications another Richmond Jewish immigration story: that of the family of the city’s most politically powerful son, Cantor. His grandparents fled anti-Semitism in Russia to arrive in America and start a new life in Virginia’s capital. “I am the grandson of immigrants, and as such my life has been blessed with both the strong religious faith and hard-working, entrepreneurial ethic that so many immigrants bring to America,” Cantor wrote in the 2010 book “Young Guns: A New Generation of Conservative Leaders,” which he co-wrote with fellow Republican Reps. Paul Ryan and Kevin McCarthy.

Organizers said Cantor was invited to attend the event but did not respond.

As the discussion drew to a close, participants were offered a letter to sign. It was to be sent to Cantor, urging him to meet with his local Jewish constituents to discuss immigration. The immigration stories presented at the event “have inspired us to consider the Richmond Jewish community’s unique connection to the issue of immigration,” the letter said. The 36 participants joining the letter asked their congressman to “meet with a group of Richmond Jewish leaders to discuss how the issue affects our community and how we can support you to fix the broken immigration system.”

The request comes after previous attempts by Jewish immigration activists to meet with Cantor were turned down. Gary Creditor, who is the rabbi of Richmond’s Temple Beth-El and is a member of the grassroots group Virginia Organizing, has been unsuccessful in his requests to meet personally with Cantor and discuss immigration reform. Creditor vowed to keep on trying to convey the message to the House majority leader, explaining that “sometimes it’s like water on a rock, and you have to continue working and working at it all the time.”

Cantor’s office did not respond to requests from the Forward to comment on the event, or on Cantor’s refusal to meet with members of the Jewish community in his constituency to discuss immigration reform.

The drive for reforming America’s broken immigration system and for dealing with the estimated 11 million undocumented immigrants gathered momentum late last year, as prominent senators from both parties agreed on a set of reform principles. Republicans controlling the House of Representatives also seemed to express willingness to take on the issue. But bitter disputes over including a path to citizenship for undocumented immigrants, and pushback from more conservative GOP circles, led the House leadership to announce that it would not advance immigration legislation this year.

Cantor recently suggested that instead of taking on a major overhaul of the immigration system, both parties should try and make progress on the smaller issues they can agree on, such as legalizing the status of children of undocumented immigrants who study in college or serve in the military.

Richmond’s Jewish community, with 12,000 members and six synagogues, is considered small in size. But some of the activists who showed up to the immigration event carry weight on the local political scene. Ipson has contributed to Cantor’s congressional campaigns, as has Mark Sisisky, who moderated the meeting. Both also gave to Democratic candidates in the state. Sisisky, whose father was a Democratic member of Congress from the district now represented by Cantor, said he believed that “the Jewish story of immigration is a story Eric should take into account when he leads the party.” But, keeping in the spirit of Southern hospitality, Sisisky also made clear that “we didn’t come there to slam Eric.”

Cantor’s relationship with the organized Jewish community has been a mixed bag. A staunch supporter of Israel, Cantor is counted as a safe vote on legislation relating to Israel and is seen as an ally of the pro-Israel lobby. Yet on the domestic front, where the Jewish community trends liberal, and where Cantor holds conservative views — especially on fiscal matters — cooperation has been rare.

Levine expressed her hope that the immigration issue will have more resonance with the Republican leader. “I don’t know what drives his decision-making process, but he is the No. 2 Republican in the House and clearly he has a Jewish identity,” she said. “Everyone is trying every possible way to influence, and we are choosing this way.”