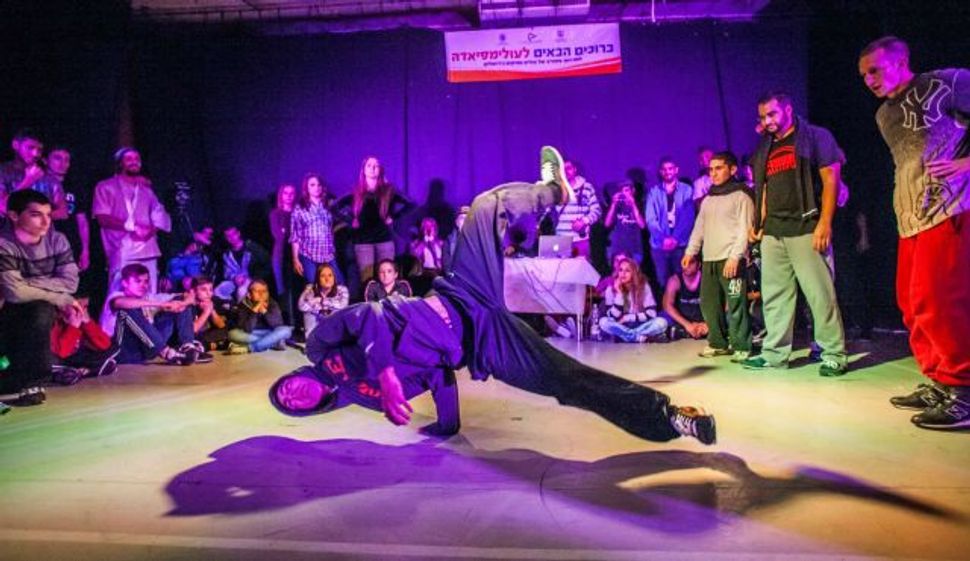 A dancer competes at the ?Prove Yourself B-Boy Jam? in Jerusalem. Image by haaretz/Emil Salman

They have names like Elastic, G-Rock, Aladdin, Pac Man and Splinter. They sport hoodies, backwards baseball caps and Adidas footwear. They dance in circles, but they don’t do the hora; they’re Israeli b-boys and b-girls, and they have serious flavor.

Israel’s top break dancers took part in the “Prove Yourself B-Boy Jam” on Thursday, competing in head-to-head battles before a transfixed crowd of students and friends at the Israel Goldstein Youth Village in Jerusalem. The dancers, mostly young men in their late teens and early 20s, executed flips, windmills, head spins and freezes, earning cheers from the crowd and praise from the guest judge, a professional b-boy from Ukraine.

“I’ve been to many countries, and the skill level in Israel is high, but not the highest,” said the judge, Minik of the East Side B-Boys, adding that “the dancers are headed in the right direction.”

Break dancing emerged in New York in the 1970s and ‘80s, alongside DJing, MCing and graffiti art — the main elements of a new culture created by poor black and Latino youths that would later be called hip hop. Today, hip hop is a global force in music and fashion, and break dancing “crews” have sprung up throughout the Middle East in recent years, from Tunisia to Gaza.

In Israel, the dance form and its counterculture ethos have been embraced by immigrants from Russia, Ukraine and Ethiopia. A handful of crews with a dozen or more members meet regularly to practice and compete. The country also hosts Floor Masterz, an international break dancing competition now in its fifth year that draws participants from as far away as Japan and the United States.

The local break dancing scene has grown dramatically in the last decade, according to Dima Peisahov, the manager of Urban Project, a company that offers break dancing classes at four different studios around the country and organizes Floor Masterz.

“I’ve been on the scene since 2002, and there were a lot fewer people then,” said Peisahov, who is 27 and immigrated with his family from Russia when he was 11. “When we had the first Floor Masterz in 2010, there were 350 people. Last year, about 1,000 people came, half to participate and half to watch.”

He said the competition, which will be held this year on April 10 in Hadera, doesn’t have any sponsors; the costs are covered by ticket sales.

Several dancers said in interviews Thursday that break dancing helps them channel their frustrations with life in Israel into something creative and positive. In break dancing, unlike in life, there are no rules.

“I like how you can express yourself however you want,” said 22-year-old Artyom Golovam, who goes by the b-boy name Artik (popsicle in Hebrew) and is a member of a predominantly Russian crew called Unstoppabullz. “You can incorporate folk dancing, capoeira, kung fu, gymnastics. It’s completely free.”

Several dancers, including Golovam, said they support themselves by performing at bar and bat mitzvahs and weddings, as well as by teaching.

“My dream is to bring b-boying to all of Israel, to inspire the next generation,” said Itamar Greenberg, aka Pita, after finishing second in the freestyle portion of the competition Thursday. As sweat poured down his face, Greenberg, 19, told Haaretz he was skipping the army to devote himself to dancing full time.

In addition to teaching both children and adults in Hadera and Ramat Gan as a member of the Urban Project team, Greenberg has competed in Switzerland, Greece and France. “When the other dancers ask me where I’m from, I tell them and they’re like, ‘Yo, you’re from Israel? That’s cool. You have a weird style,’” he said. “There’s no politics involved.”

Shanit Eleazer of Tel Aviv was one of only three women who took part Thursday, advancing to the semifinals of the “top rock” part of the competition, which emphasizes moves performed in an upright position. Eleazer, 19, said she studied ballet for years and first became interested in break dancing after seeing a performance in Tel Aviv.

“I asked myself, why aren’t there any girls on stage?” recalled Eleazar, who is currently serving in the army. “I see it as a challenge to show that I can compete with the guys.” Now she travels to competitions overseas and is part of an all-female break dancing crew called the Funky Chicas.

For Roman Chorny of the Tel Aviv-based Breakaherlics Your Troubles crew, break dancing is more than a dance form, it’s a lifestyle.

“During the day I’m a hair cutter at a salon on Dizengoff Street, and after eight I’m a b-boy,” said the 25-year-old known as Spyda. “Even when I’m exhausted, I have to dance.” So where does he practice? “The boardwalk, the port, the bus station, wherever there’s an open floor, I’m there.”