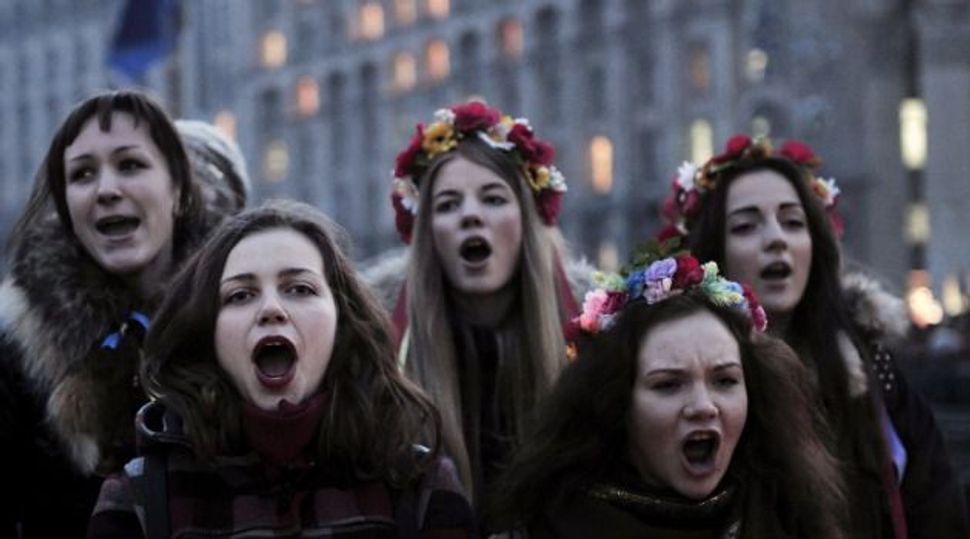 A loudspeaker blares protest calls and a steady crowd buzzes in the background as a young Ukrainian Jewish girl talks into the camera, live from Kiev’s Independence Square.

“I want to let you know that lots of people who study Hebrew together with me are going to Euromaidan after classes every single day,” she said, referring to the protest movement that camped out for months on the square prior to its success in ousting the country’s president and his government on February 22. “My friends, my coworkers from the Jewish Channel go to the Maidan too… Here, at Euromaidan, it doesn’t matter which nationality you are.”

The unnamed girl’s message, which went viral on YouTube among Ukrainians during their recent struggle, was clear: Rabid nationalists were not driving Ukraine’s anti-government protests. Rather, the protests began as a united effort on behalf of all Ukrainians to change the course of their country — to make it a better place for all of its citizens.

But that was a message decidedly at odds with the one being publicized in various Jewish and Israeli media outlets at the time.

On February 22, the Israeli news outlet Maariv reported that Rabbi Moshe Reuven Azman, one of the country’s several chief rabbis, was calling on Kiev’s Jews to flee.

“I told my congregation to leave the city center or the city altogether and if possible the country too,” Rabbi Azman was quoted as saying. “I don’t want to tempt fate,” he added, “but there are constant warnings concerning intentions to attack Jewish institutions.”

According to Maariv, Azman, who is affiliated with the Chabad-Lubavitch Hasidic movement, had closed the Jewish community’s schools but was still holding three daily prayers at his synagogue, just a mile away from the Maidan.

The same article cited Edward Dolinsky, head of the umbrella organization of Ukraine’s Jews, the Ukrainian Jewish Committee, describing the situation in Kiev as dire. “We contacted [Israeli] Foreign Minister Avigdor Lieberman requesting he assist us with securing the community,” he told the news outlet.

The reported firebombing of a synagogue 250 miles southeast of Kiev one day after Maariv’s report appeared to reinforce the disturbing message.

But in a February 25 interview with the Forward, Azman denied making the sweeping statement that Maariv attributed to him. His comments, he said, were taken out of context. The situation is dangerous for everyone, he explained.

Conditions in the country have remained unstable since February 21, when the protesters at the Euromaidan got their most fervent wish and the country’s president, Viktor Yanukovych, was impeached and fled the city. The country remains deeply divided between those who lean, as Yanukovych did, towards neighboring Russia and want the country to stay within its orbit and those pushing to link the country to the West.

But most Jews interviewed by the Forward in Ukraine — where the community is thought to number 100,000, though some estimates are higher — are skeptical that they will become targets in the government transition.

“I’m really happy that the government changed in Ukraine,” said Arsenyi Finberg, a Ukrainian Jew who took part in the Euromaidan protests. “I don’t think that the threat to Jews increased with the change in government.”

Finberg said that he didn’t see the presence of Svoboda, a far right nationalist party that has been accused of anti-Semitism, as an overwhelming one on the Maidan. And he didn’t see ultra-nationalist groups playing a big role in the remaking of the country.

During the months of protests and unrest that preceded the ouster of Yanukovych and his government, the protesters did not have one visible, uncontested leader. But three major opposition figures — Vitali Klitschko, Arseniy Yatsenyuk and Oleh Tyahnybok — were prominent and joined together at one point to try to end the demonstrations via negotiations with Yanukovych. As leader of Svoboda, Tyahnybok’s presence in this troika was worrisome to both Jews and other ethnic minorities.

But Vyacheslav Likhachev, a member of the Euro-Asian Jewish Congress, said that less than 1% of those protesting were nationalists, or radicals.

To say that only Jews are in danger is to overlook the larger political situation in the country, said Likhachev. “During the last week, the Jews were in danger, not as Jews, but as citizens of Ukraine.”

In the days just preceding Yanukovych’s ouster, violence between pro- and anti-government forces resulted in over 82 deaths and 500 injuries. Among those killed, three or four are said to be Jewish.

The violence subsided when Yanukovych left Kiev. And in less than a week everything changed in the country. The government forces that used to guard the Ukrainian Parliament and the city center were replaced by Euromaidan self-defense groups, which were assigned to outposts to maintain order in the city.

But the synagogue firebombing, which took place in the country’s southeast, sparked concern about the Jewish community.

The firebombing of the Chabad synagogue took place in the town of Zaporozhye but caused little damage, according to the news site Chabad.org. Nevertheless, it understandably frightened some in the community.

According to Josef Zissels, a prominent leader in the Jewish community, it’s still not understood who was responsible for the attack.

While Yanukovych was still president, bands of government-funded thugs were frequently hired to intimidate anti-government protesters and provoke fear and discord in the anti-government protest movement. These groups were especially active in Ukraine’s south and east, a region where Zaporozhye is located. Their presence became so common that a special word entered the vernacular to describe them: titushki.

Zissels said it was not unreasonable to think that groups like the titushki were responsible for this attack, using it to spread fear that the new Euromaidan-backed government will allow a new wave of anti-Semitism to hit Ukraine. “Mainstream events that are going on in Ukraine don’t involve anti-Semitism in any way,” he said.

According to Rabbi Yaakov David Bleich, one of the country’s other chief rabbis, the big challenge now is putting the government back together again so that there can be comprehensive order in society.

Still, Bleich echoed U.S. Department of State advisories urging against travel to Ukraine at this time. Bleich said he advised a group of rabbis who were planning a tour in Ukraine to reschedule their trip. “I can’t guarantee their safety and neither can anyone else,” Bleich said.

Bleich also expressed concern for the safety of his community, though not, per se, as Jews. Unlike foreigners or tourists, they have nowhere to flee, he said. Bleich has set up an online fund to help raise money for the protection of Jewish schools and community centers, which he said is needed as the country transitions. Bleich’s community currently relies on a private security service that costs $1,000 per day.

The rabbi advised Jews in Ukraine that “they should stick around [but], don’t go around at night, don’t go places you shouldn’t go, that’s it.”

Bleich, who met with top members of Ukraine’s provisional government on February 25, said he found the acting president, Oleksandr Turchynov, intent on the key issues. “The issues are not national minorities,” he said, but restoring order to Ukraine. And on this he was hopeful.

“The most important part of events on Maidan is that Ukraine was given a new dawn, a new opportunity to reorganize a democratic society,” said Bleich.