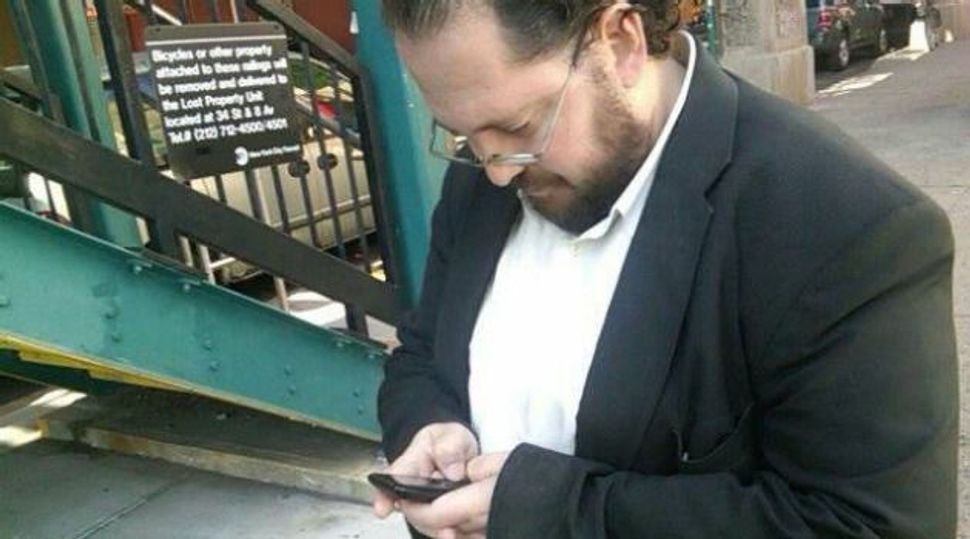 Frum or Fake? More than a dozen victims say this man talked them out of money with elaborate Jewish-tinged tales of woe. Is he really an Orthodox Jew or simply a skilled con man?

More than a dozen Orthodox Jews have come forward to complain they were scammed by a ‘fake frum’ con artist in New York City who tricked them into giving him substantial sums of money with tales of bad fortune.

The fraudster, who often approaches his targets near rail stations as the Sabbath nears, proffers panicked appeals to help a stranded fellow Jew who must get home before sundown, after which traditional Jewish law forbids travel. He may offer a bogus home address or even an actual cell phone number. But he refuses to repay his debts as promised.

Amtrak Police confirmed they are searching for the con man after the Forward published his photo and a story detailing his scam on February 17.

“He’s a person I’m investigating,” said George Gernon, an investigator for the Amtrak Police Department, which probes crimes in and around Penn Station, an area where several people said they were approached.

Since then, 13 more victims have detailed encounters with the man. In many of these, the man identified himself as “Ethan Schwartz.” But the fraudster, who has successfully been doing business as early as 2009, has also identified himself as “Glenn Goldstein,” “Dave Cohen” and “Chaim Goldman,” among other names.

So far, according to several victims, the New York City police appear to be taking little interest in their complaints.

One victim said police at the 66th Precinct in Brooklyn refused to take a report, indicating the $80 taken was too small an amount.

After another victim complained to police at the Midtown South Precinct about the scam in 2013, Detective Desmond Egan indicated that he was on this case, and had a mug shot of the man. But a few months after this incident, Egan informed the victim that the case was closed. “Unable to locate Goldstein,” he wrote.

“Go sue him,” another detective recommended, according the victim. “It’s a civil matter.”

Reached by the Forward, Egan said he could not comment on the case. Sergeant Brendan Ryan, an NYPD spokesman, refused to comment.

Gernon, the Amtrak investigator, contacted the Forward after last month’s article was published. But he refused to comment further on the hunt for the suspected con man.

Although the con man alternates among various locations in Midtown Manhattan, he sticks to a similar modus operandi that tugs at the Jewish heartstrings of his victims.

He tells of a car that has been towed, no money on his person to pay for it, and a wife waiting at home in Westchester as the Sabbath nears. He speaks the Orthodox lingo well, quoting Torah verses on the fly, thereby invoking the victims’ sense of loyalty to a kindred Jew.

He promises to repay the sums, ranging from $20 to $300. As a show of trust, he shares his real cell phone number and a fake address, and even allows the person to photograph or videotape him. When the person calls to ask for repayment, the fraudster responds sympathetically at first, but grows increasingly belligerent as the victim persists.

In 2009, he was on the NYPD’s radar as “Glenn Goldstein.” Back then he hung around banks and ATM locations in Midtown, usually requesting small sums. In a video, shot in 2009, “Goldstein” is seen reciting into the camera, seemingly for the record: “I am Glenn Goldstein. You’re lending me $20, and I’ll repay you $20.” Several recent victims identified the man depicted in the video as the same person who scammed them.

The videomaker urges viewers to contact Detective Alexandra Paquette of the 17th Precinct on Manhattan’s East Side with tips about the con artist. Attempts to reach Paquette were unsuccessful.

Since taking back to the streets in recent months, the fraudster has become more audacious. Now sporting a “yeshivish” look – a black suit, white shirt, black kippah and a short beard — he is asking for larger sums than before and, at least sometimes, getting them.

“It was Erev Simchat Torah, and I was meeting a friend who had a layover in New York at Penn Station,” Josh Dembowitz wrote the Forward in an email. Dembowitz, a 23-year-old recent college grad, explained that he doesn’t generally wear a kippah outside of synagogue. But in this case, he donned one as he waited because the friend he was meeting, who did wear one, “would be eating kosher…and I wanted him to feel comfortable.”

A minute later, the scam artist approached him, saying his car had been towed and impounded, Dembowitz said.

“The man needed a lot of money — about $150,” he told the Forward. “I gave it to him. He looked the part, he mentioned ribes, the Jewish prohibition against loaning money at interest, even offering to pay my ATM fee, because that wasn’t interest.”

Initially, the fraudster’s request seemed like “a test, a sign from G-d,” Dembowitz wrote. “I felt great about myself, for giving to this man and coming through this ‘test.’”

But when he told friends about the “amazing” thing that had happened to him, he was told bluntly that he’d been scammed. Sure enough, his efforts to collect his debt using the phone number the man gave him came to naught.

“I haven’t heard from him in months,” he told the Forward.

Menachem Mendel, who would only agree to be quoted by his first and middle names, realized he’d been scammed after several weeks of fruitlessly trying to get his money back from the fraudster. He then reported the incident to police at Manhattan’s Midtown South precinct, but was rebuffed by detectives.

The latest scam episode reported to the Forward occurred two weeks ago inside Macy’s in Midtown Manhattan.

“He’s still texting me back and forth pretending like he’s still going to send the money,” Adina Friedlander wrote.