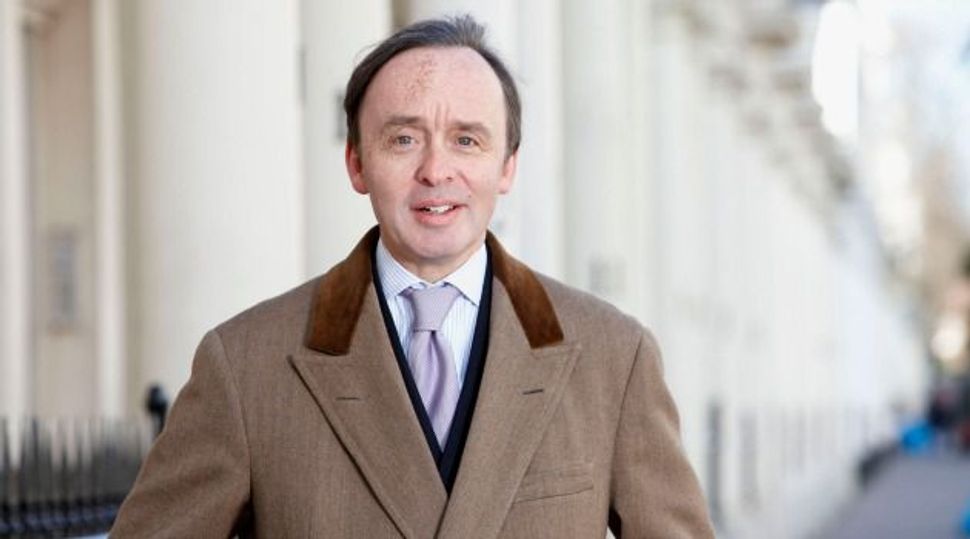 Strange Candidate: Julius Meinl V is the scion of a Viennese coffee roasting and supermarket emporium. Image by Courtesy of Meinl Bank

Last month, Julius Meinl, a prominent businessman, was elected as the new president of the Euro-Asian Jewish Congress, a regional constituent group of the World Jewish Congress. The EAJC’s member states include Russia, Ukraine and many other members of the former Soviet Union, along with India, Myanmar, Singapore and New Zealand, among others. But Meinl, who holds dual Austrian and British citizenship, is none of the above.

At second glance, it’s an even odder choice.

Meinl is the scion of the Viennese coffee roasting and supermarket emporium founded by his great-great-grandfather, Julius Meinl I, a non-Jew, in 1862. He has never before had a leadership role in any Jewish organization, and he is not a registered member of the Jewish community of Vienna, his home city. Plus, his mother was baptized.

What’s more, Austrian authorities are currently investigating allegations of bank fraud against Meinl Bank, where Meinl is chairman of the board.

Despite this, EAJC executives and others hailed Meinl’s ascension to leadership of the organization. “Julius Meinl[’s] name is recognized by generations around the globe,” Motya Chlenov, the deputy executive director of the Russian Jewish Congress, wrote to the Forward in an email. “[The] history of this family may well serve as the role model for the first generation of Russian Jewish philanthropists.”

A spokesman for Meinl himself said the scion was not available for an interview. The spokesman, Thomas Huemer, instead sent his curriculum vitae and the acceptance speech Meinl gave at the EAJC’s General Assembly in Jerusalem on February 17. In this address, Meinl said that he saw representing the EAJC as “the beginning of the next step of my involvement with the Jewish world.” So far, this involvement has included donations to a small synagogue in Vienna and to the Yitzhak Rabin Center, in Israel. In autumn 2013, Meinl signed a joint venture with the EAJC for a fund to support the needs of Jewish communities under its purview. More details are not available, according to Huemer.

The nature of the alleged fraud involving Meinl’s bank is complicated. But the investigation remains active, and Meinl’s suspected role in it appears to be significant.

Meinl became the head of Meinl Bank, the family banking arm, in 1983, when he was 24 years old. Later, with real estate assets from the family and its retail property portfolio, he started Meinl European Land. He then took the company public in 2002, with shares sold on the Vienna Stock Exchange. His bank served as a formal management advisor to MEL.

Though Meinl had no formal position at MEL after it went public, the relationship between his bank and MEL remained very close: In 2006, revenues from MEL made up 60% of the bank’s earnings. Austrian authorities are investigating allegations that during the worldwide recession that began in 2007, MEL secretly sold shares of itself to a company controlled by Meinl’s family and later bought it back, all to the profit of the Meinl family, but at a loss to MEL’s shareholders.

Meinl adamantly denies any role in the transactions under investigation. But in April 2009, he was arrested as a flight risk and released after two days on bail of $137.5 million.

Joseph Zissels, chairman of the EAJC’s General Council, said through an interpreter that it is Meinl’s philanthropy, among other criteria, that made him choose the businessman. Zissels said that he spoke to 35 candidates from 27 countries last year, and then chose Meinl to be presented as the only candidate at the G.A.’s election in mid-February. Asked about the banking scandal, Zissels said, “If he wasn’t proven guilty, he’s innocent.”

Meinl’s family history is best described as colorful: By the eve of World War I, the company started by Julius Meinl I had grown into the largest corporate food group in the Austro-Hungarian Empire. It continued to flourish in several European countries, including Austria, Germany, Poland and Czechoslovakia, after the war.

In 1938, as World War II approached, Nazi Germany invaded Austria, and Julius Meinl III, Meinl’s non-Jewish paternal grandfather, fled to England to save his Jewish wife from persecution. But the Meinl company remained intact under Nazi rule in the hands of Meinl’s great-grandfather, Julius Meinl II, and his adoptive son.

Meanwhile, on the maternal side, Meinl’s mother is the daughter of two Jewish parents who, according to published reports, had their children, including Meinl’s mother, baptized. Meinl himself is not known to be a practicing Jew.

Meinl was born in Austria in 1959. His dual citizenship is a byproduct of his grandfather’s wartime sojourn in England. He graduated from St. Gallen University, in Switzerland, where he studied finance and economics.

As the banking investigation continues, Meinl’s lack of connection to the Jewish community has not kept him from claiming anti-Semitism when dismissing the negative publicity he has received in connection with it. In his speech accepting the EAJC presidency, Meinl cited a May 2009 cover story on the alleged scandal in the Austrian news magazine Format. The cover depicts him with his hair parted at the side, Hitler-style, and with a stern look on his face, over the headline “Meinl’s Kampf.”

“The Jews being blamed for an economic crisis is a classic trope,” he told the EAJC gathering. “This was, in my view, a clear and public act of anti-Semitism.”

The article itself is certainly critical of Meinl. But it makes no mention of his Jewish heritage.

An Austrian court later found the cover to be offensive. But the court made no mention of Meinl’s Jewishness or of anti-Semitism. The problem was the public insult of making Meinl out to resemble Hitler.

After his speech at the EAJC’s assembly, Meinl received a standing ovation that lasted almost 10 minutes, according to Dov Weissglas, an Israeli attorney who was present.

Weissglas, who was chief of staff to Ariel Sharon during Sharon’s tenure as Israel’s prime minister, told the Forward that he has witnessed Meinl’s surging interest in Judaism for the past “four to five years.” He got to know Meinl, Weissglas related, when he advised the businessman on an issue of Israeli law. Meinl, he said, kept asking questions about Israel. “He is re-exploring his roots,” Weissglas said. “I think this choice [as president] is almost natural.” Weissglas now sits on the board of directors of one of Meinl’s companies.

Meinl may not be a resident or citizen of any the countries in the EAJC’s orbit, but he does have substantial business interests in some of them. The family company has had supermarkets in several Eastern European countries before and after the Cold War. Meinl has also expanded his bank into this region. The bank has recently opened offices in Bulgaria and the Czech Republic. Meinl also serves as chairman of Fulcrum Properties, an investment firm now building a shopping center in the Russian town of Ufa. Fulcrum is the firm to whose board Meinl appointed Weissglas.

Meinl’s new position with the EAJC now gives him a prominent public advocacy role in these countries, as well.

If Meinl manages to leave the controversial parts of his past behind, the EAJC is likely to benefit from his surging interest in his Jewish background, and not just because of financial contributions from Meinl to its activities.

“In today’s Russia, a businessman who is a citizen of Russia would not say anything that is critical of the Putin regime without jeopardizing the organization,” said David Fishman, a professor of Jewish history at the Jewish Theological Seminary, in New York, who specializes in Eastern European Jewry. Meinl is likely to be less vulnerable because he is not a resident, which makes it more difficult to arrest him, he said. Meinl’s business interests are also less likely to be damaged by the Russian government, since he has a considerable part of them in other regions, said Fishman, who called his selection by the EAJC “a shrewd and clever move.”

Meinl is not the first EAJC president to be linked to a possible scandal. Alexander Mashkevich, the group’s founder and first president, is an Israeli-Kazakh billionaire who was connected to what became known as the Turkish sex yacht scandal in October 2010, when Turkish authorities broke up an alleged prostitution ring on a boat that Mashkevich was on. Though initial reports said he was arrested, Mashkevich later denied this. He resigned from his post in June 2011 in order to focus on his business, according to media reports.

Vadim Shulman, a businessman with Ukrainian, Russian and Israeli citizenship, succeeded Mashkevich as interim president and was formally elected in June 2012. Shulman is the sponsor of a documentary series, “The Third World War Has Begun,” about the threat of terrorism. At the end of last year he announced his resignation, because he couldn’t fulfill the necessary duties for the job, according to the EAJC’s press release.

While Meinl might seem an odd choice to head a Jewish organization in the eyes of an American or Western European reader, Fishman said that the situation is different in the EAJC’s member states. Due to high rates of intermarriage in former Soviet states, “there is a much looser definition of Jewishness,” he said. “It’s truly a choice to adopt Jewish identity.”