‘Shul on the Beach’ Makes Orthodox Waves in Los Angeles 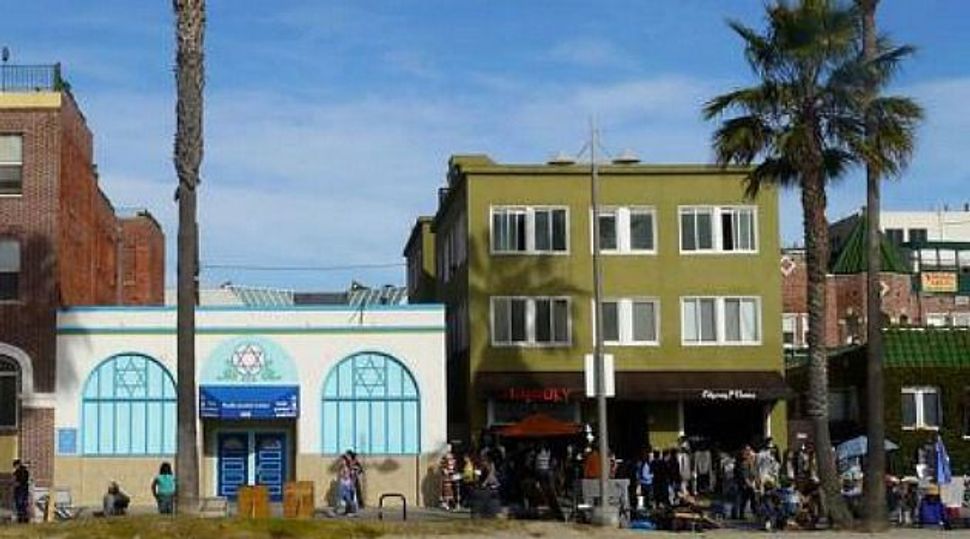 On the Boardwark: The little ?Shul on the Beach? is the pride and joy of one Rabbi Eliyahu Fink, a baby-faced 32-year-old rabbi with a conventional Orthodox education but some very unconventional views, and even more unconventional visitors to his congregation. Image by haaretz

If you haven’t, it means you’ve never been to the Pacific Jewish Center on the boardwalk in Venice Beach, California. The little “Shul on the Beach” is the pride and joy of one Rabbi Eliyahu Fink, a baby-faced 32-year-old rabbi with a conventional Orthodox education but some very unconventional views, and even more unconventional visitors to his congregation.

“We allow almost anyone to come into the shul as long as they look safe,” says Fink, looking very un-rabbinical on a weekend morning in a button-down shirt and a baseball cap, as he meets me in the cafe next to the synagogue and ushers me inside, away from the activity of the Venice boardwalk. A bustling all-day festival of shops and cafes, the Venice boardwalk is one of the biggest tourist attractions in Los Angeles, but also a haven for lost souls down on their luck, some of whom find themselves in the Pacific Jewish Center looking for consolation.

“You can’t just say they’ll go to the next shul and find the next rabbi. There isn’t one, so we have to be on our best behavior and have to always be alert, always be ready for that person who needs open arms or somewhere to cry. Sometimes when it’s more empty on a Friday night, people will come in, non-Jews, and prostrate themselves on the ground in a non-Jewish type of prayer and maybe they’re even high. On one hand I think to myself, ‘is this appropriate?’ On the other, I think to myself, where would this person be able do this if this person can’t come here? This is giving them something no one else can give them, a place where they feel connected.”

He hastens to add that his synagogue is far from being merely a refuge for the dispossessed. Some very sophisticated people stop in as well. His small core of congregants are businesspeople and entrepreneurs, and Venice being what it is, sometimes Hollywood glitter blows their way. Natalie Portman has been snapped by paparazzi carrying her baby Alef into the synagogue. One Yom Kippur, it was Sasha Baron Cohen who performed the “Birkat Cohenim.”

Most recently, Fink raised the synagogue’s media profile by agreeing to be the first synagogue to participate in a National Geographic reality series called Church Rescue, in which three business-savvy ministers, known as “the church hoppers” travel the country helping faith-based organizations reestablish themselves in the marketplace. By participating in the show, the synagogue got an “Extreme Makeover”-type facelift, complete with repairs, paint job and renovation.

The unusual location of the Pacific Jewish Center is connected to the history of Jewish Los Angeles. Before air-conditioning and backyard swimming pools, the Jews of urban L.A. would migrate to the beaches of Santa Monica and Venice for the weekends, and several small synagogues were established to serve their needs. Over time many of those potential congregants stayed home, prompting almost all of the beach synagogues to shut their doors. Only the PJC, where a tiny group of elderly Jews had trouble putting together a minyan, remained. In the 1970’s Rabbi Daniel Lapin and writer Michael Medved decided to revitalize the PJC and it now has a small but strong core membership of 50 families, supplemented by its high number of transient worshippers. The nature of Venice beach as a tourist destination means that congregants come and go like the tides of the ocean. Sometimes worshippers return every few months, sometimes they come once a year and sometimes they don’t come back at all.

One memorable visitor, Fink recalls, was David, a Hare Krishna follower from a Jewish background, who came in on Friday nights and enjoyed listening to Fink’s sermons. “He came wearing the skirts, he had the ponytail with the shaved head. He sometimes had paint on from a Hare Krishna religious ceremony. He had these beads and each different bead stood for another name of God. But we let him come. After a time, he didn’t come for a while. And then not long ago, someone comes to me and says: ‘Rabbi, there’s this guy, I don’t know he slipped in, but be careful (because) I don’t know what’s going on with this guy.’”

When Fink greeted the Hare Krishna man, he saw that he was shaken up and asked what was wrong. “He said he stopped in ‘because I lost my son today.’ His 30-year-old son died of an overdose. He said ‘I just needed a place to pray.’ And then he told me that his wife had also died of an overdose at 30 years old. That’s what this guy was carrying with him….There are people like this here. If they don’t come here, where will they go?”

Fink was raised in a modern Orthodox family in Monsey, N.Y., but he took a more Haredi direction after attending the prestigious Ner Israel Rabbinical College in Baltimore and receiving his ordination. Married at 20, he worked in college and high school Jewish outreach, thought about a career in social work, but eventually enrolled in law school in L.A. That’s when a family member saw an ad for a position at the PJC shul.

“They had been looking for a rabbi for more than a year. They had a problem because it’s a very diverse community.” Fink’s very traditional background, combined with his youth and liberal politics, was acceptable to both the traditionalists and the less strictly religious members of the congregation.

He’s manned the pulpit for the past five years. The position was supposed to be a temporary, part-time job, but Fink says it soon became clear to him that he would make a much better rabbi than he would a lawyer. While his brick-and-mortar congregation is small, Fink tries, as a true member of the Internet generation, to serve a wider online congregation through writing in support of greater acceptance and inclusion in the Jewish world. The goal of his blog, Fink or Swim and on social media, is to “bring my message to a broader audience and bring people into my community even if they don’t live here” and to give a voice to “passionate and compassionate Orthodox Judaism.” He is a frequent critic of what he sees as fundamentalist Orthodox views and argues passionately for the more open-minded, inclusive approach he puts into practice at PJC.

Gender equality, however, is a sticky subject. Online, he is an enthusiastic supporter of egalitarian “Open Orthodoxy” and supports the Women of the Wall. But as a congregational rabbi of a synagogue belonging to the Orthodox Union network, he feels bound by responsibility to his congregants to maintain a traditional Orthodox synagogue. He takes pains to point out that the gender-separating mehitza is down the middle of the sanctuary and women are not relegated to the back. However, he admits that he imposes more traditional limitations on women’s public participation in prayer then he would like.

Many of his real-life and many of his virtual congregants are those who left Orthodoxy. He has an affinity for the so-called “Off the derech” community partly, he admits, because many of his former yeshiva classmates see him as having fallen away from the true path. He views it as his special mission to be a sympathetic and understanding Orthodox rabbi who respects and withholds judgment on individuals who have left strictly Orthodox or Haredi communities.

“I used to think that it was easier to leave Orthodox Judaism than it is to stay – that those who leave are weak. That’s what I was taught in the Orthodox world. But I’ve discovered that it’s the actually the opposite. It takes a tremendous amount of strength to leave and most do because they are in a tremendous amount of pain. And if someone is in pain because of a world that I am a part of, if I can do anything to alleviate their pain, I will do it.”

‘Shul on the Beach’ Makes Orthodox Waves in Los Angeles