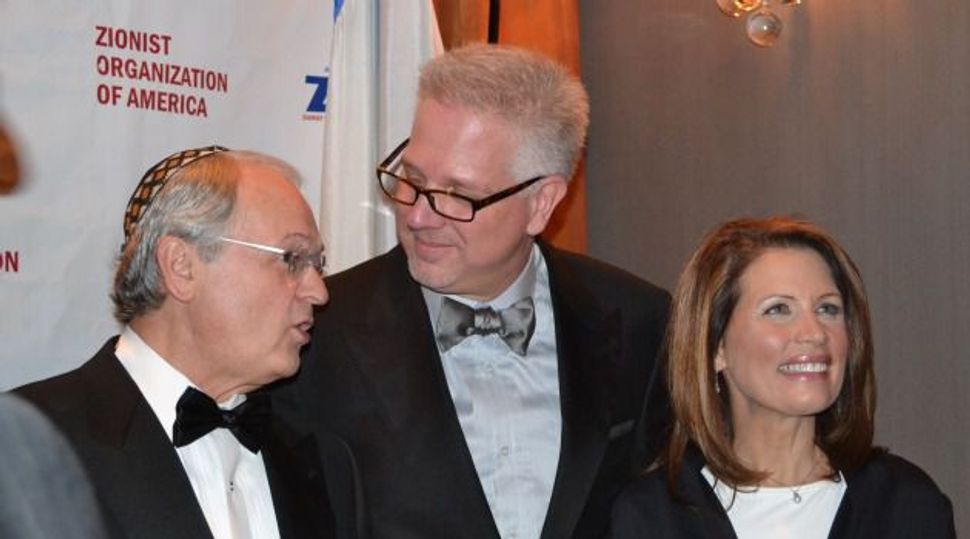 Mort?s Challenge: Morton Klein, left, the longtime leader of the Zionist Organization is facing a challenge ? from a fellow right winger. Image by naomi zeveloff

For 20 years, Mort Klein has served as National President of the Zionist Organization of America, a right-leaning Israel advocacy group with a venerable history. But on Sunday, Klein will face the first election challenge of his presidency when ZOA members meet to vote on granting him another term as Steven Goldberg challenges him for the position.

The issues at stake do not involve the group’s political direction. Both men stand firmly on the right end of the Zionist political spectrum and are, among other things, deeply suspicious of the current U.S.-brokered Middle East peace process and of the two-state solution for Israel and the Palestinians that is endorsed by Israel and the Jewish establishment.

But the contest has grown into a bitter feud following the group’s short-term loss under Klein of its tax-exempt status for failing to file tax documents with the IRS for three years, as first reported by the Forward.

Goldberg first emerged as a Klein opponent during the period in which the group was wrestling with the loss of its charitable status in February 2012. The tax-exempt revocation only received public attention after the publication of a Forward article disclosing it seven months later.

Goldberg launched his bid to unseat Klein in part because he believes the ZOA is in “steep decline,” thanks to what he described as falling donations, dwindling membership, and poor employee morale.

The group’s most recent publicly available tax returns, now filed with the IRS, show that ZOA’s income for 2012 was a little less than $2.9 million, compared to almost $3.3 million the year before — a decline of more than 13%.

“Mort Klein deserves credit for reviving the ZOA 20 years ago, but then he also has to shoulder responsibility for the condition of the ZOA today,” Goldberg said. “Unless there is a change of leadership, it’s going to sink into irrelevance.”

Klein was not available for comment while travelling. But he told the Times of Israel recently that he cares more about the organization than his personal role.

“If someone came along who was better at this job than I am, then I’d want them to do it,” he said. “If there was someone else who could raise $4 to 5 million from personal donors, be a credible, outstanding public speaker who could inspire people and promote our agenda, then great. But no one has these qualifications.”

Goldberg, who is based in Los Angeles, has called the election “stacked,” in part because the vote will be held in Philadelphia, Klein’s hometown – and ZOA members must be physically present in order to vote. The previous ZOA convention was held in 2010 in New York City.

“This is the first contested election in 20 years,” Goldberg said. “It happens to be in Philadelphia, where his friends are.”

On his campaign website, Klein dismisses Goldberg’s charge as “absurd,” noting, “the location was set months before the opponent announced that he was running.” Goldberg said his election bid was common knowledge long before he filed as a candidate. He believes the ZOA national board chose Philadelphia under the assumption he would challenge Klein.

David Drimer, ZOA’s national executive director, insisted there was nothing sinister in the selection of Philadelphia for the vote’s venue.

“It was looked on very favorably because it’s far less expensive to house people and to cater in Philadelphia,” he said. “Also it is really conveniently located for the mass of our most active members.”

Goldberg claimed he has broad support from ZOA members, many of whom will not be able to attend the convention because they can’t afford the cost or the time away from their jobs. Older members may not be able to make the trip for health reasons.

“I think every member should have the right to vote,” he said. “They’ve donated time, the effort, and the money.”

Drimer said ZOA’s constitution states that decisions made at the convention require a “majority vote of those present and voting.” According to the ZOA’s leadership, that means members must be physically present.

Goldberg scoffed at Drimer’s interpretation, which he claimed was rooted in the past.

“It can be interpreted in different ways. You can be present via the internet,” he said. “This was written a long time ago before there was this technology.”