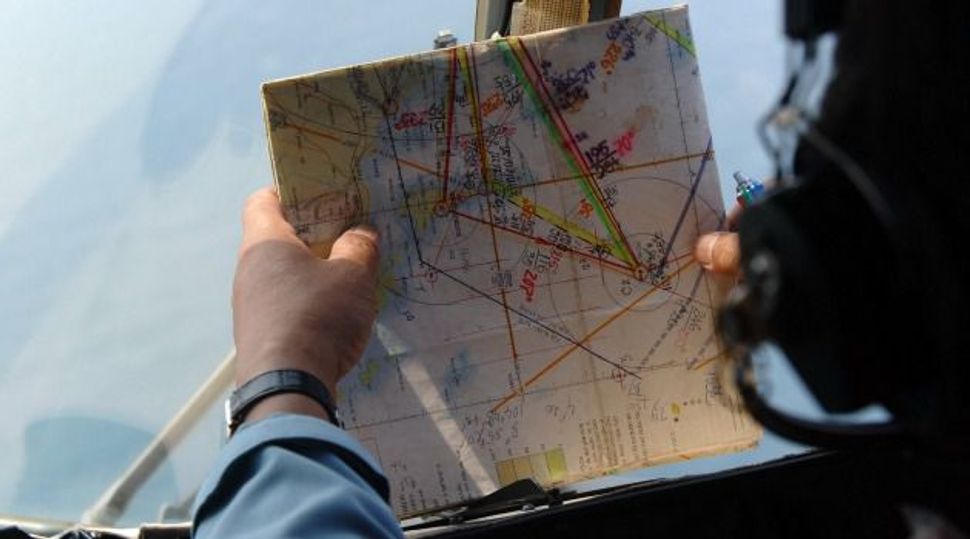 Without a Trace: A Vietnamese helicopter crew searches for the missing Malaysia Airlines Flight 370. Image by getty images

The owner of a travel site claims a Jewish air traveler cheated death when he decided not to fly on Shabbat — and avoided being on board doomed Malaysia Airlines flight 370.

The lucky globetrotter changed his mind about booking the flight last Saturday after an observant travel agent refused to book the flight from Kuala Lampur to Beijing, according to Daniel Eleff, a friend of the travel agent and CEO of the Cleveland-based travel site Dansdeals.com.

“Holy God, You sure[ly] heard what happened to [Malaysian Airlines flight 370],” the traveler, who only identified himself by his first name of Andy, wrote to the travel agent in an email. “I cannot stop thinking about this. This is a true miracle for the books. You are a true life saver.”

“I am so happy for you!” the agent responded. But he saw a larger plan at work in Andy’s close brush with death. “Not I am the life saver. God and Shabbat were your life savers. You owe them something,” he wrote.

The Malaysia Airlines flight disappeared without a trace about an hour after taking off from Kuala Lampur. Authorities are still searching for the plane or its wreckage — and seeking an explanation for what they assume was its crash.

The flight-switch drama unfolded when Andy asked his travel agent to book a flight on March 8. But the agent, who is an Orthodox Jew, said he did not want another Jew traveling on Shabbat.

“I wish I can give you a day later, but you know I just don’t like flying Jews on Shabbat,” he wrote in a January 14 email to Andy, one of several emails between the two men which were posted on a blog on Dansdeals.com.

Andy told the agent not to hold the Friday morning flight – he decided to book a flight on Shabbat independently.

“I guess I’ll just book [the Saturday flight] myself,” Andy told the agent, but asked him to book the rest of his itinerary, which included flights to Vietnam, Hong Kong, and Melbourne, Australia.

Later that evening, Andy changed his mind and decided not to fly on Shabbat after all. He thanked the agent for prompting him to consider the obligation not to travel on the holy day.

“I reconsidered, you are right and I should be more observant,” Andy wrote the agent. “I’ll manage without that day in Kuala [Lumpur].”

The travel agent booked the Friday flight, and both men put the matter aside. On March 7, Andy successfully flew on Malaysia Airlines flight 370 from Kuala Lumpur to Beijing. Exactly 24 hours later, the same flight ended in tragedy, resulting in the presumed deaths of the 239 people onboard.

After Shabbat ended on March 8, the travel agent turned on his computer and read the grateful email.

The story of Andy’s near-miss was posted online by Daniel Eleff, a friend of the travel agent and CEO of the travel site Dansdeals.com. Eleff provided several redacted emails, with identifying information removed.

“At this time the travel agent and the passenger are opting to remain anonymous,” he told the Forward in an email. “They are choosing to wait until the fate of the flight in known to determine if they’ll go public.”