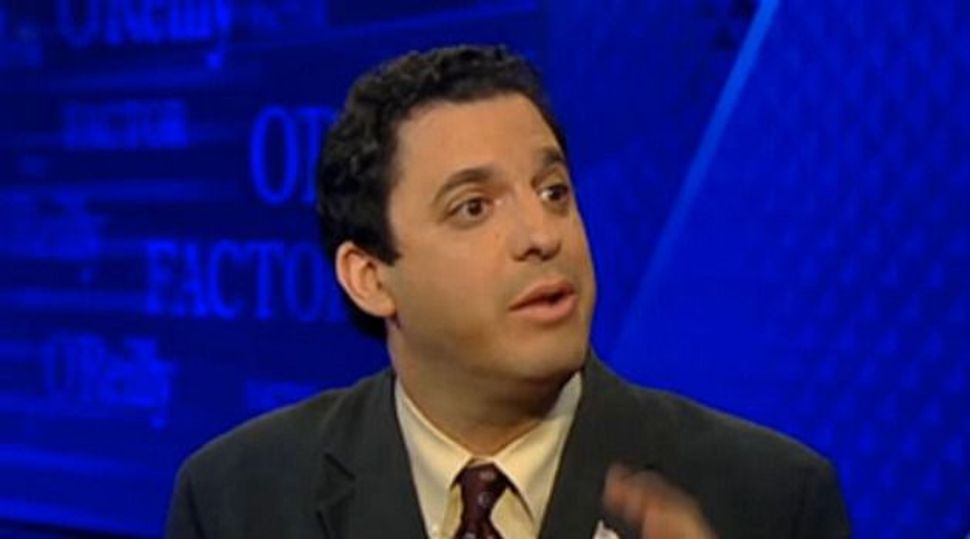 Image by courtesy of fox news

David Silverman considers himself a conservative. Yet organizers of the recent Conservative Political Action Conference, a massive gathering held yearly in the nation’s capital, did all they could to make him feel unwelcome. They even took away his presenter’s booth.

It was not just that Silverman was an atheist. As president of American Atheists, a national advocacy group, Silverman was there to represent an organization that fights for the rights of irreligious Americans.

Silverman was not discouraged. Instead of sitting at a desk, he walked through the halls of America’s biggest convention of conservative activists and handed out fliers advocating separation of religion and state. The fliers reminded members of the group most closely identified with bringing God into politics that millions of American voters hold no religious beliefs.

“I thought I would enter a room full of hate, but I did not find hate at all,” Silverman said as he completed his rounds at the March 7 conference. “In fact,” he added, “more than once I met people that finished my sentences.”

Silverman is no stranger to debates. He is, in fact, always happy to engage in arguments about religious beliefs and his lack of them. It’s a skill he has honed from childhood, in arguments with his mother about having a bar mitzvah (she won, and he was called to the Torah) and at the lunch tables at Brandeis University, where the young atheist would strike up conversations with students at the kosher food tables.

Today, as he tries to translate the power of millions of irreligious Americans into a political voting bloc, Silverman relies on many Jewish troops within the atheist movement to help him reach his goal. “There are a lot of Silvermans in atheism,” he said

The decision by CPAC organizers to ban American Atheists from participating in the conference followed Silverman’s warning there that Christian right-wing organizations should feel “threatened” by the atheist movement when it comes to their hold over the Republican Party. But Silverman said his point was more practical than ideological.

The Republican Party, atheists believe, is making a mistake by alienating, or at best ignoring, conservative Americans who oppose religion, Silverman explained. Indeed, Silverman speaks of making atheists into a voting bloc that “both parties will want to solicit.”

To achieve this, atheists will have to overcome deep-rooted resentment among many in American society toward the idea of living without religion, a sentiment that is still strong despite a gradual decrease in indicators of bias against the irreligious. They will also have to assert their power as a cohesive political force, a formidable task for a group of loose affiliation and with various definitions of atheism.

A 2007 study put the number of atheists in America at 5 million, but when adding in those defining themselves as agnostics and respondents who say they hold no religious faith, the figure rises to 20 million. Other surveys have put the number of Americans with no religion at 35 million. Atheist activists believe that with 20% of Americans questioning the existence of God, the number should be more than 60 million. While numbers vary, all scholars note that atheism, whether self-defined or viewed as just lack of religion, is a growing phenomenon among younger Americans.

Still, atheists remain ranked as America’s least trusted minority group. According to a 2010 survey, most Americans would not approve of their children marrying an atheist. Other studies have shown that bias against atheists is higher among Republicans than among Democrats.

But Silverman believes that if Republicans overcome these sentiments they will find plenty of common ground with atheists. Many libertarians, a growing force among conservative Republicans and an increasingly powerful electoral bloc, share atheists’ disdain for government-sponsored religion. “There’s a big chunk of atheists that could be interested in the Republican Party but are not doing so because of the influence of the Christian right,” said Silverman, who described himself as a fiscal conservative who votes Democratic because of the Republican views on church and state.

Silverman is one of several speakers for atheists in America, and his organization is one of at least five groups that represent irreligious Americans. But last year he gained the status of an Internet icon after an astonished facial expression that he made during a heated interview with Fox News’s Bill O’Reilly turned into a popular Internet meme titled “Are You Serious?”

Silverman, 47, grew up in a Jewish family in Marblehead, Mass., but from a very young age he disagreed with the idea of religion. His questioning of faith was a source of contention with his mother, who insisted that he go to Hebrew school and have a bar mitzvah. Standing on the bimah and reading his portion, Silverman recalled feeling that “it was the greatest lie I had to tell.” He resolved to be an atheist. But he still went on to complete his confirmation.

Later, while studying at Brandeis, arguing with Jewish friends about religion was one of his favorite pastimes. He identified himself as a Jewish atheist, meaning Jewish by culture but irreligious by faith.

As leader of American Atheists since 1996, Silverman directed the group’s advocacy and public activity, much of it on display on billboards before Christmas to call for a season of celebration without the “myth” of religion.

In recent years, Silverman abandoned his decades of self-definition as a Jewish atheist. While working on a book he is about to publish, he reached the conclusion that this religious cohabitation was impossible. “I wanted to describe why Jewish atheism makes sense, and I failed,” he said. He rejected the notion that being Jewish could be not only about a religion, but also about being part of a culture or a national ethnic group.

For Silverman, this also meant rejecting the notion of Israel as a Jewish homeland. “The idea that Israel is a home for all Jews is nothing more than a marketing scheme at this point,” Silverman said, “it’s a great way to lure legal, loyal immigrants. It makes no more sense for a Jew, let alone a former Jew, to have religion-based allegiance to Israel than it does for a non-Italian Catholic to have allegiance to Italy.”

Silverman’s personal formulation of Jewish identity as something purely religious moved him to see the current state of Jewish identity nationally as a potential boon to his political agenda. Silverman believes there are many Jews who are, in fact, atheists but have yet to acknowledge it.

“I want to de-demonize the word ‘atheism,’” he said, “there are so many Jews out there that are in fact atheists and not Jewish.”

Jews are already overrepresented in the atheist movement, and historically many atheist thinkers came from Jewish backgrounds. Harvard University political scientist Robert Putnam, who researches religion in America, said in an email to the Forward that studies show Jews are overwhelmingly more likely to question the existence of God. “That figure is much higher among Jews than any other major religious group in America,” he noted.

Pew Research Center’s survey on American Jews, published last year, supports this view. Silverman sees in this a growing demographic of potential supporters for his movement. According to Pew, one in five American Jews describes himself or herself as having no religion, with the share increasing to 32% among millennial Jews. If these young American Jews adopt Silverman’s definition and view themselves as atheists, they could be the next activists handing out anti-religious fliers at political conventions.