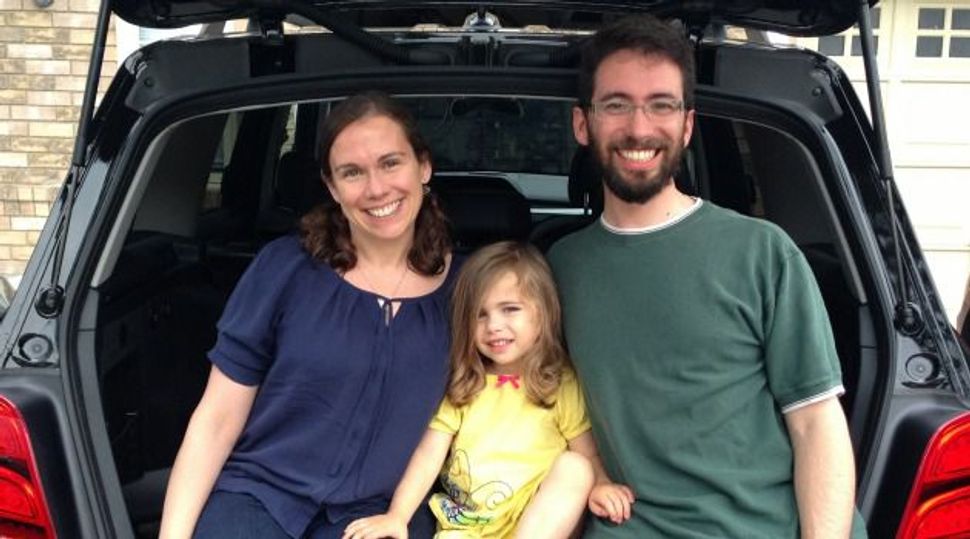 Renan Levine and Mira Perry, along with their 4-year-old daughter, Ziva Perry Image by courtesy of renan levine

In November 2012, Renan Levine and Mira Victoria Perry were eagerly awaiting the birth of their second child. Two days before the scheduled C-section, the Toronto couple received the news expectant parents dread most: their child had died in utero.

With no family in the area and their synagogue rabbi out of town, the couple hesitantly turned for support to a chaplain whom they had never met: Rena Arshinoff, a rabbi, nurse, and epidemiologist, who appeared on the Forward’s recently released list of Most Inspiring Rabbis.

Arshinoff met Perry and Levine during the dark hours of childbirth, providing the couple an unexpected source of comfort during their ordeal.

“It’s a lonely thing to think you’re about to have a living child. And now all of a sudden you have to think about funeral preparations not, ‘Do we have diapers ready? Do we know where we’re going to put the crib?’” Levine said. “To have someone you can draw strength from like Rabbi Arshinoff was immensely valuable to my wife and me.”

Though she is an experienced chaplain, Arshinoff is still moved when families are willing to allow her to help them. “I arrived at the hospital a complete stranger to them,” Arshinoff said of the couple. “That takes a lot of trust for both of them to allow me into their lives in such an intimate situation. And what a privilege that is for me.”

Today, Arshinoff is one of just two certified rabbinic chaplains in Canada, but her journey to the rabbinate was a long one. She spent nearly three decades working in health care, first as a nurse and later as an epidemiologist.

But after the deaths of her father and her sister, Arshinoff began to rethink her career path. She became more connected to Judaism, saying kaddish (a prayer of mourning) for her loved ones and holding a bat mitzvah as a 48-year old.

“I was able to crunch numbers and analyze statistics until the cows came home,” she said. “But one day I was thinking, ‘Maybe I would like to go back to my roots after 18 years, maybe I’m tired of working with numbers so much.’”

In 2003, Arshinoff decided to enroll at Hebrew Union College, the flagship seminary of the Reform movement. “I really did feel in going to rabbinical school that I was still studying health – just a different side of it,” she said. “I wanted to work with people and now I was looking at the spiritual not the physical component of health.”

Read All of America’s Most Inspiring Rabbis 2014

After graduating, Arshinoff decided to blend her medical background with her passion for Judaism by spending a year studying in a chaplain’s certification program. Today, the sixty-year-old, who describes herself as a “perpetual student,” is pursuing a PhD in palliative care through a long-distance program run by Lancaster University in the U.K.

She also serves as a chaplain for the Toronto Western Hospital, does freelance rabbinical work, advises healthcare professionals on grief, and – in her spare time – volunteers with Bereaved Families Ontario, an organization devoted to helping grieving families.

Levine and Perry said they were grateful to have a supporter with such extensive medical and rabbinic experience present during delivery. Arshinoff helped coach Perry through the labor and delivery and helped the couple select appropriate prayers to mark the occasion. But for the most part, she just stood quietly beside the couple, her mere presence a comfort.

“I literally stood right next to [Renan] – that was what he needed. He even said ‘Please don’t leave – stay with me,’” Arshinoff said. “When the baby was delivered, he said that he would bathe the baby but he wanted me to stand right next to him.”

By the end of this traumatic day, Arshinoff was no longer a stranger. “When she was initially there in the delivery room I was a little hesitant, but it didn’t take long until we felt we wanted her there,” Perry said. “Her simply being there helped us find some context and put things in a bit of perspective.”

Arshinoff has continued to advise the couple long after they returned home from the hospital. “At first, you’re sort of in a fog. You go home and you sit in the living room and you go ‘Wow, what do I do now?’” Perry said. “She managed to provide just the right nuggets of helpful information, reading suggestions, and thought-provoking ideas to mill over. It really helped.”

Knowing when to speak at all is the secret of helping people who are grieving, according to Arshinoff. “To be with someone in a painful, hard situation is not easy,” she said. “We want to jump in, to fill the silence. [But] there are many times that there are not words. ”

Perry said she deeply appreciated Arshinoff’s silence. “So many people want to offer you advice or consolation,” she said. “They want to say, ‘It was meant to be,’ or ‘At least it wasn’t this or that.’ She doesn’t give any of these pithy responses. She listens.”

The couple decided to nominate Arshinoff for the Forward’s list of Most Inspiring Rabbis in part because they knew Arshinoff receives few public accolades for the private work of chaplaincy.

“It’s not like a good sermon that everyone applauds you for. It’s not like people [can] say, ‘Oh rabbi, you did such a good job standing by my side while I was dying,’” Levine said. “It’s a reminder that some of the most inspiring things that rabbis do are off the pulpit and often out of the eye of the majority of their community.”