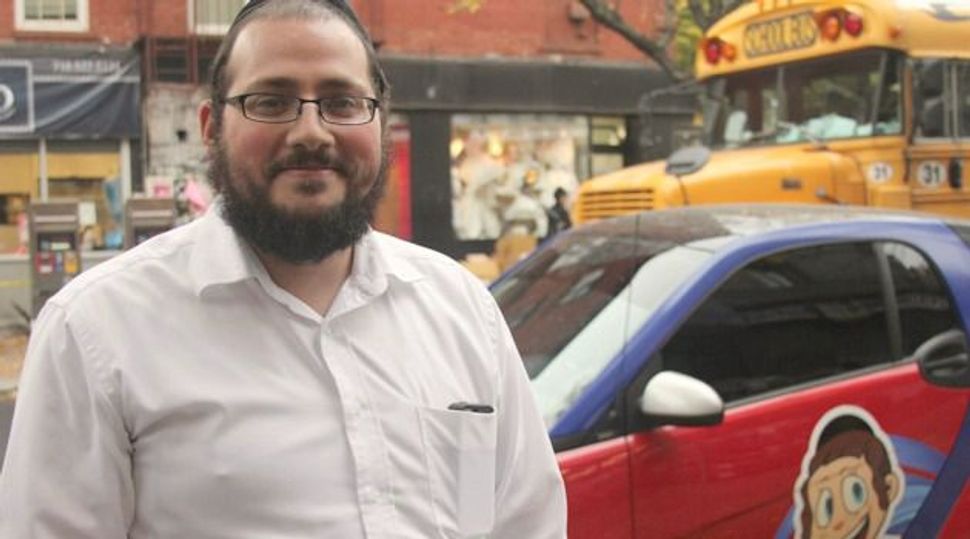 Samuel Lipschitz, 27, grinned as a pint-sized red smart car pulled up next to the curb outside his toy store on Lee Avenue in Brooklyn. Lacquered onto the side of the car was a children’s cartoon character: a freckled, round-faced boy with curly brown peyes, or sidelocks, and a yarmulke.

“What Walt Disney did to Mickey Mouse — that’s what I’m trying to do here,” said Lipschitz, who designed the character.

Wise Buys, his South Williamsburg toyshop, caters to children in Hasidic Brooklyn. The Wise Buys Boy is the store’s mascot, and — if Lipschitz has anything to say about it — he’ll one day be America’s first ultra-Orthodox household name. Lipschitz has plans for Wise Buys Boy puzzles and dolls, and is talking with suppliers in China.

Hasidic children don’t watch television, Lipschitz explained, so the store’s mascot fills a big gap — as does his uniquely Jewish toy selection. “Sponge Bob,” he said, “is not an item here.”

“I never dreamed of working with toys. But basically it became a passion,” Lipschitz said. 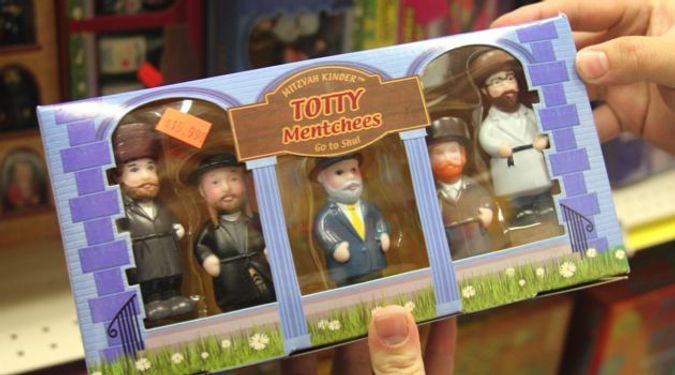 Action Figures: Totty Mentchees is one of many kosher toys at Wise Buys. Image by Kristen Clark

Small businesses like Wise Buys have traditionally been one of the few avenues for financial success in a community that carefully restricts its contact with the secular world. Observance of the Sabbath and religious holidays, for example, can put Orthodox Jews at a disadvantage in looking for work in the larger community, says Rabbi David Niederman, executive director and president of the United Jewish Organizations of Williamsburg.

He added that rigorous study of the Talmud could come at the expense of secular education.

“College and doctors and lawyers — that’s a profession that we have not been involved in,” Niederman said.

As entrepreneurs, Hasidim have the opportunity to create work environments that operate on their terms. Niederman pointed to B&H, the Hasidic-owned photo and electronics superstore that closes on Friday and Saturday for the Sabbath and employs hundreds of Orthodox associates.

“The only education I got was from yeshiva,” he said. “So basically this is what’s called street smart, not book smart.”

Lipschitz inherited the entrepreneurial bug from his father, who made a small fortune collecting the de-icing fluid that drained off airport runways, distilling it in vats in Newark, N.J., and selling it back to America’s military for use in Iraq. The operation went bust in the economic upheaval of 2008, when the price of the diesel needed for it suddenly skyrocketed. But Lipschitz says his father’s venture inspired him to go out and take his own risks. “If you don’t go big, you’ll never get big,” he remembered him saying.

Out of a job, and itching to find a way to support his family, he bought a store from his brother-in-law about two years ago. The shop sold rubber bands, Crocs shoes and other odds and ends. But on Lipschitz’s first day behind the counter, a customer wandered in, asking for a sharpener. Lipschitz didn’t have one, but he wrote down the item — beginning a precise running tally of neighborhood demand.

On stroller-jammed Lee Avenue, it seemed that what everyone was demanding was supplies for kids. Lipschitz sprang into action, calling wholesalers and snapping up any item on his list that he could find at a discount: overstocked pencils, Silly Bandz bracelets, boxes of misprinted Arizona Cardinals notebooks and — to the delight of his two small children — toys.

On a recent Wednesday afternoon, Lipschitz showed off one of his newest items, a giant Lego-style Binyan Blocks synagogue set selling for $59.99. Pictured on the back of the box, tiny Lego men with plastic-fur shtreimel hats and women with coiffed hair sit in separate sections, attending to a miniature Lego rabbi with a purple plastic Torah. A sticker calendar on an interior wall announces the time of sunset.

“When I walk into a showroom where they sell toys, 80% of the items I can’t even bring in,” Lipschitz said, explaining the conspicuous absence of Barbie and Betty Boop from his shop. “Modesty is a very big thing for us; we try to bring in toys that match our values.” The same goes for Bratz dolls; Lipschitz said that he’d just been offered a closeout-price shipment of these and “didn’t even look at them.”

But aside from modesty, Lipschitz says it’s another value that really drives his toy selection. Some of his most popular items are toys you can build and make with, like 3-D foam art stickers, or weavable Loom Bands friendship bracelets.

The business — centered in a community where it’s estimated that more than half the population is younger than 18 — is now thriving. The Hebrew Free Loan Society recently loaned Lipschitz $25,000 interest-free to help expand his shop into the vacant pharmacy next door. The local micro-lending not-for-profit organization began a targeted program five years ago to provide capital and entrepreneurship training to Brooklyn’s ultra-Orthodox communities, and is about to surpass $2 million in loans to Hasidic small businesses.

Lipschitz is focusing first on expanding to other Jewish neighborhoods, but he eventually wants to bring his toy stores — and his Wise Buys Boy — to children everywhere. He’s already on his way; a trickle of Hispanic customers from the neighborhood snapped up some of his more mainstream Fisher-Price items over Christmas.

“He opened up his first store at 27 years old,” Lipschitz said of the Wal-Mart mogul. “I’m 27 now, and I’ve had a store two years already. So basically, I’m ahead of Sam Walton.” He sleeps with a copy of “Made in America” — Walton’s autobiography — in the top drawer near his bed.

Kristen Clark is a dedicated patron of abandoned buildings and senior centers. She writes and produces from her fourth-floor fire escape in Central Harlem.