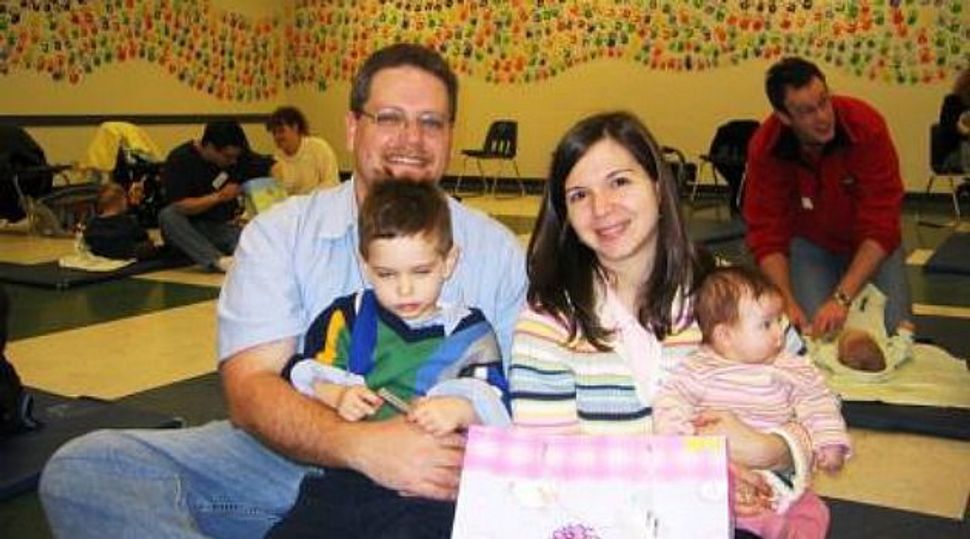 (JTA) — When the leaders of Winnipeg’s Jewish federation sat down 13 years ago to try to figure out a way to reverse the community’s decline, they came up with a novel idea: recruit Jews from overseas.

The idea was pretty straightforward. Capitalizing on the pro-immigration policies of their home province of Manitoba, the Winnipeg federation would seek out faraway Jews — mainly from troubled countries in South America — and bring them to the snow-swept plains of central Canada. The timing coincided with the economic crisis in Argentina, and after a recruiting trip by federation leaders to Buenos Aires in 2001, dozens of Argentine Jewish families arrived.

But very quickly, following an initial infusion of South Americans, the main source for Jewish newcomers unexpectedly became Israel, even though the federation wasn’t doing any recruiting of or marketing to Israelis.

In fact, since the inception of the federation’s GrowWinnipeg program in October 2001, some 80 percent of the 4,400 or so newcomers have come from Israel, most with roots in the former Soviet Union.

While bolstering the Jewish community’s raw numbers, the influx has not resolved worries about the community’s future. On the contrary, some critics say the focus on bringing in immigrants, most of whom are secular Russian Israelis, has failed to halt the exodus of Jews from Winnipeg and done little to shore up troubled Jewish institutions.

“The recent influx of Jewish families have been Russian Israelis who seem to be less actively involved in synagogue life and are not involved in Jewish community life to any extent at all,” said Ian Staniloff, executive director of Congregation Shaarey Zedek, the largest synagogue in Winnipeg. “We offer free membership to new immigrant families, but they seem not to be as interested in joining or pursuing a Jewish lifestyle.”

Membership in the Conservative synagogue, which is located on Winnipeg’s south side, has declined 5 to 10 percent in the last five to 10 years; only two or three Russian-Israeli families have joined, according to Staniloff.

Federation officials argue that GrowWinnipeg has been a success and that the Winnipeg Jewish population has risen to 16,000 from about 13,000 before the program’s launch.

“Had the trajectory continued going south, we would have lost our critical mass and the ability to fund our institutions,” said Bob Freedman, CEO of the Jewish Federation of Winnipeg. “It’s worked and given the community a real flavor in terms of language and customs. All in all, the program was a success. This community is feeling really good about itself, which we weren’t 20 years ago.”

Faye Rosenberg-Cohen, the coordinator of GrowWinnipeg and the federation’s director of planning and community engagement, says the program has helped fuel a “huge revitalization in terms of our institutions and community activities.”

But critics question the accuracy of the federation’s population statistics, noting the absence of scientific surveys to substantiate the numbers. Data from Canada’s National Household Survey actually show a decline of Winnipeg Jews between 2001 and 2011. The 2011 survey counted 10,735 Winnipeg Jews by religion and 12,000 Jews by ethnic origin, down from 12,045 and 14,440, respectively.

Even if the federation’s statistics are accurate, they suggest that the population of veteran Jewish Winnipegers has continued to slide because the number of newcomers is larger than the total increase in Jewish population cited.

At the community’s only day school, the Gray Academy of Jewish Education, the student body has grown to 600 from 485 in 2001, and about 20 percent of the students are from Russian-Israeli families. The head of school, Rory Paul, says the immigrants have added a whole new dimension to Gray and exposed the Canadian kids to foreign languages and cultures.

But the immigrants also have helped push for a curriculum that focuses less on Judaics, and the tuition discounts they’ve been given have wrought financial havoc on the school’s bottom line, according to Paul.

Originally, the idea was that the immigrants’ lot gradually would improve and eventually they would be able to afford tuition, Paul says, but two troubling trends have emerged: One, immigrant parents often decide after a couple of years to pull their kids from Gray because they’re not really interested in formal Jewish education. Two, when immigrant parents finally do well enough in their careers to afford the tuition, they end up leaving town for better jobs.

“In the last two years, 30 students representing about 20 families moved away from Winnipeg to other cities to take on senior management jobs,” Paul said. “Where’s the payback to Winnipeg? Where’s the payback to all the money Winnipeg has invested in them in the first five to eight years? The cost factor is huge in terms of what the immigration is doing to the rest of the community.”

Danial Sprintz, executive director of Camp Massad, a Hebrew immersion summer camp with many immigrant children, says that “those kids, while taking a lot financially, give back more than they could ever take.”

Many community members describe the immigration as a tale of two cities. The immigrants from Argentina, Brazil, Chile and Mexico bring with them strong traditions of Jewish communal engagement and Zionism, and for the most part they are active community members. Then there are the Israelis, the bulk of them Russian speakers, who are mostly secular and uninterested in Jewish communal life except for the occasional Yom Haatzmaut or Purim party.

“You’ve changed the mix of the community by bringing in 4,000 secular Israelis. Is that going to be a recipe for the future? I have my doubts,” said Rhonda Spivak, editor of the Winnipeg Jewish Review, an online publication. “There are definitely people who don’t think it’s going to lengthen the life of the organized Jewish community, especially if many Russian Israelis don’t integrate into the organized community or ultimately help support the community institutions.”

Despite the harsh winters and mosquito-infested summers, Winnipeg has much to offer prospective newcomers. A diversified economic base has helped make its economy the fourth-strongest among Canadian cities, according to the Canadian Imperial Bank of Commerce, and Winnipeg has big-city amenities with a small-town feel. Perhaps most important, Manitoba is actively seeking skilled immigrants, so long as they meet certain criteria related to employability, education, language proficiency and adaptability.

For Priscilla Kerr Hatae, an acupuncturist who immigrated from Sao Paulo, seven years ago through GrowWinnipeg, the No. 1 draw was security. In Brazil, Hatae says, a good friend was murdered a few blocks from her home, her father was kidnapped twice and she was mugged three times.

“I really could not raise a family in a country where you go to work and you don’t know if you’re coming back,” she said. “For me, coming to Winnipeg was like being in paradise. I know it’s cold and everything, but there’s no comparison to the life we used to live in Brazil.”

GrowWinnipeg partners with the government of Manitoba to help identify worthwhile candidates for immigration, and once the federation recommends someone, immigration usually is assured.

Even federation leaders acknowledge that GrowWinnipeg’s focus must change if the city’s Jewish future is to be secured. Freedman, who is retiring this year after 27 years at the federation’s helm, says he is talking with federation staff about how to ensure a larger proportion of newcomers come from communities with strong Jewish identification, such as Latin America, and how to attract more observant Jews to Winnipeg.

The federation, which is located on the Asper Jewish Community Campus, built in 1997, coordinates exploratory visits, introduces newcomers to potential employers, assists with housing and makes connections with local Jews. The newcomers are offered discounts on JCC membership, synagogue dues, summer camp and day school tuition. For those who need extra help, there’s the Jewish Child and Family Service, which has three staffers devoted to resettlement.

“We’re the backup plan — whether it’s helping people arrange a bris or a bar mitzvah, or helping arrange a funeral or having to pay a couple of months’ rent,” said Emily Shane, the agency’s executive director.

When Misha Hanin first emailed GrowWinnipeg from his home in Beersheva, Israel, after a friend directed him to an online article about the program, Hanin says he was surprised to get a response the next day. After he immigrated in 2007, he had trouble renting an apartment because he had no credit history. He turned to the Jewish federation, which wrote him a reference letter that helped him obtain a lease. A couple of years later he turned to the federation again for a recommendation for a child psychologist.

“I came here with nothing, zero,” said Hanin, who immigrated to Israel from Ukraine in 1991. “Now I have a lot of friends from Israel that came here. I told them about the program — I told them I got support from the Jewish community. I consider this an amazing place to live.”