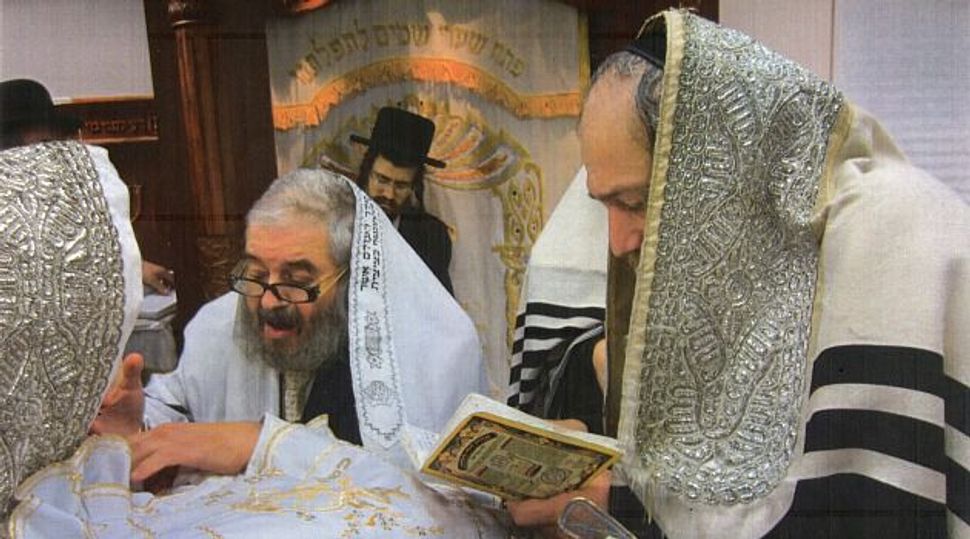 Tradition? Rabbi Avrohom Cohn performs a bris at a synagogue in Brooklyn?s Boro Park. He says he performed the controversial metzitzah bpeh ritual, but did not get consent from the parents. Image by courtesy of avrohom cohn

After cutting off the infant’s foreskin, Rabbi Avrohom Cohn leaned down toward the baby boy who was cradled on a white pillow atop his grandfather’s knee.

Standing fully over the child, with his back to the dozens of immaculately dressed guests at the Syrian Jewish gathering in Brooklyn, it was impossible to see what Cohn did next.

Asked after the ceremony whether he performed the controversial rite metzitzah b’peh, also known as MBP, in which a ritual circumciser places his mouth on the baby’s genitals to suction blood from the circumcision wound, Cohn smiled and said, “I did what I had to do.”

If Cohn performed MBP without getting written consent from the infant’s parents, he broke the law.

It’s something he has done many times before.

For more than a year, ritual circumcisers, known as mohels, have been required to obtain written consent from parents before performing MBP.

The New York City Department of Health and Mental Hygiene instituted the regulation in the fall of 2012 after a number of babies contracted herpes following MBP.

The department says that 14 infants have been infected in New York City since 2000. Two of those babies died, and at least two others suffered brain damage.

But Cohn, who performs MBP regularly, says he has never obtained consent from a parent, and he never will. “I don’t believe in it,” Cohn said of the consent form.

Cohn, 85, is no ordinary mohel — he is chairman of the American Board of Ritual Circumcision, and widely considered one of the top mohels in a very Jewish city.

In an earlier telephone conversation, Cohn told the Forward that MBP must be performed to fulfill the commandment of circumcision. He said that the only exception is if the rite puts an infant’s health at risk.

By this, Cohn did not mean the health of the infant in front of him at a bris. Cohn said the risk he feared was that the infant of a couple who are “not strictly observant” might transmit a disease to him via MBP — and that he could then transmit that disease to another infant.

“They could be drug users, they could be going to prostitutes and who knows what, and are infected with all kinds of diseases,” Cohn said, referring to nonobservant parents.

Cohn said that he would not perform MBP when he believes that one or both parents lead a “permissive” lifestyle. Asked to clarify, Cohn said, “It’s not only herpes; there are other serious diseases, like AIDS and other things.”

At the Syrian bris, performed in the Brooklyn neighborhood of Flatbush on a recent weekday morning, the guests were not dressed in the stereotypical garb of Orthodox Jews. The men wore business-casual suits. Many of the women wore makeup, high heels, pants and body-hugging dresses.

“It doesn’t mean anything,” Cohn said of the way the guests were dressed. Looking toward one of the women, dressed in a pair of pants, as she left the ceremony, Cohn said, “They are very, very strict about taharat hamishpacha,” the ritual laws of cleanliness that apply during a woman’s menstrual cycle.

When a reporter from the Forward called the infant’s father after the circumcision, the father said that he was aware of the risks of MBP and that he had instructed Cohn not to perform it. “I didn’t allow him to do that,” the father said.

So what did Cohn actually do when he “did what I had to do”? Confronted with the father’s testimony, Cohn said that he had not, after all, performed MBP. But the reason, he said, had nothing to do with the father’s request; it was because the father did not seem observant enough. “That young man is out to have a good time,” Cohn said. “I don’t think he’s so careful who he has a good time with.”

This was not the only time that Cohn followed his own rules regarding MBP, at times even contradicting the expressed wishes of the parents.

Shortly before the Syrian circumcision ceremony began in Brooklyn, one guest remarked to another that he was at a circumcision recently where Cohn was asked not to perform MBP, but the rabbi refused to comply.

He told the family they would have to find another mohel, the guest recounted. Because it was already so late — all the guests had arrived — the family went ahead with the circumcision with MBP, he said.

Cohn confirmed that this had happened recently. He said an infant’s father and the family’s rabbi had asked Cohn not to perform MBP.

Cohn said that in that case, he had to perform MBP.

“Then the father said, ‘All right, go ahead and do it.”

Cohn said he did not obtain written consent from the parents before or after performing MBP that day.

Many Orthodox mohels do not believe that MBP is a necessary part of circumcision. Instead of using the mouth, they use a glass pipette or a sponge to suction the wound.

But among the ultra-Orthodox, a sizable contingent continues to maintain that MBP is an integral part of circumcision.

Several ultra-Orthodox groups — Agudath Israel of America, the International Bris Association and the Central Rabbinical Congress of the United States and Canada, which is affiliated with the Satmar Hasidic community — joined together to seek a preliminary injunction preventing the city’s department of health from implementing the consent forms.

A district judge ruled against the injunction in January 2013, and an appeal is pending before the United States Court of Appeals for the 2nd Circuit.

Meanwhile, the health department has issued two warnings since January 2013, related to two infants being infected with herpes following MBP.

Despite the two recent cases, the city has never sanctioned or warned a mohel for failing to comply with the consent form regulation.

Mohels are required to keep a copy of the signed forms for one year. But the city will not say whether it has ever enforced the law by asking a mohel to provide a signed copy of such forms.

The Forward recently filed a freedom of information request asking the health department whether it had ever requested signed forms from a mohel. The request also asked for copies of any such forms submitted with the names of family members redacted.

The health department denied both parts of the request. “While not acknowledging whether the Department has requested or received any consent forms,” the department of health’s associate general counsel said, “documents responsive to your request would be protected… as it would be an invasion of the privacy of all concerned to produce such documents to the public.”

It’s not clear how many times MBP is performed in New York City each year.

Cohn estimated that it is performed on several hundred infants per month.

He said that since tens of thousands of babies have experienced MBP since 2000, the percentage of infections cited by the health department in that time period is statistically insignificant.

Cohn said that an infant’s welfare is the most important factor in any circumcision. Toward that end, he said, all the mohels certified by his organization are tested for a range of diseases, including herpes, AIDS and hepatitis. They are retested every year to maintain their certification, he added.

“You can’t bring back a human life,” Cohn said. “Therefore, if there is the slightest, slightest possibility [of picking up an infection from an infant,] I don’t do [MBP].”

But Cohn said that the city’s claims that MBP causes herpes are a “blood libel” and that he will never obtain written consent before performing MBP.

Cohn, a Holocaust survivor who fought with the partisans in Czechoslovakia during World War II, said that the only reason he came to America was because the U.S. Constitution guarantees freedom of religion.

“Now I am here in America all these years, and I am terribly disappointed religion is being interfered with,” he said. “If they want me to go to jail, I will go to jail.”