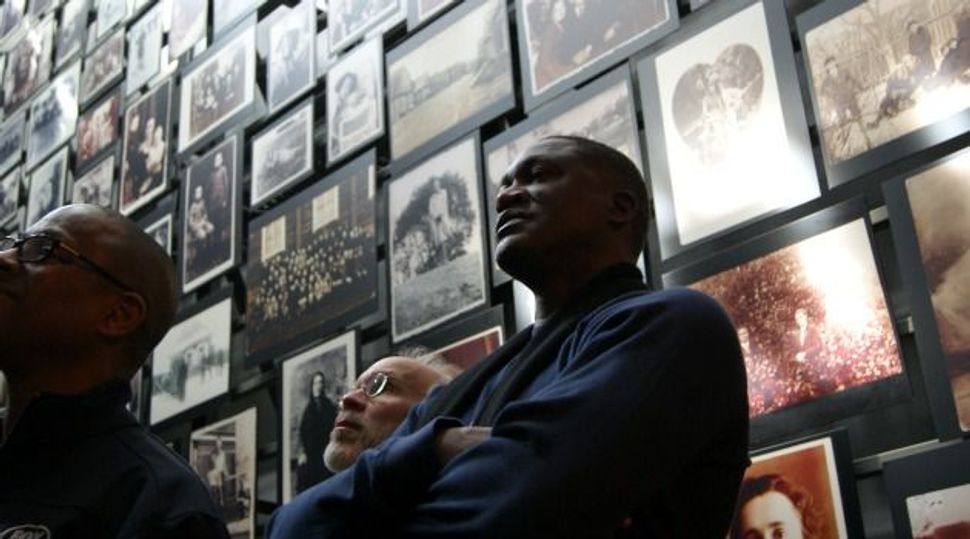 NBA player Al Horford took out his phone as he left the U.S. Holocaust Museum on Friday and Tweeted: “Life changing experience.”

It was an emotional afternoon for players and staff members of the Atlanta Hawks who arrived in Washington a day before their scheduled game with the Wizards and hustled from the airport directly to the museum.

Visits of professional basketball teams to the museum are rare. Only three teams have made the stop before. For the Hawks, it provided an unusual opportunity for the players to learn about a chapter in history that has a personal resonance with one of their team’s owners.

Bruce Levenson, the Hawk’s managing partner, is a long time donor to the Holocaust Museum and one of the key supporters of a program that teaches youth from the D.C. area to become tour guides at the museum. Some of them were on hand on March 28 to guide the NBA players as they took the hour-long tour through the exhibit.

Levenson got involved in Holocaust remembrance thanks to his mother-in-law, Irene Boyarsky. As a teenager in Hungary, Boyarsky was taken from her home and sent off to a work camp. She lost two brothers but managed to reunite with her parents after the war and later moved to the United States.

“We’re the fortunate ones,” Levenson said as he walked with his team into the elevator leading into the exhibit. “These are fortunate, gifted athletes; I’m a guy who is fortunate to own a team, but at the end of the day we’re people and the lessons that this place teaches are important for everybody to learn, maybe even more important for folks like us.”

Sitting on a wheel chair, Boyarsky greeted the players as they leaned over to introduce themselves and shake her hand. “She watches all your games,” Levenson said of his mother-in-law to the players, all dressed in team sweat suits.

Walking into a cattle car that was used to transport Jews to the death camps and which is now part of the museum’s permanent exhibit, the NBA players, towering well over 6 feet, had to bend their heads. Many expressed disbelief as they heard how the Nazis would cram as many as 100 Jews in these cars, with no water and food for days, on their way to the death camps.

“This is saddening to know that people would do that to other people,” said the Hawks star Paul Milsap, “but, there’s a sense of relief because things are getting better and things are better than what they were.”

Coach Mike Budenholtzer, said he sees the visit to the museum as a chance “for all of us to grow and enrich our lives.” And the reactions of his players, after emerging from the tour, confirmed his statement.

“It definitely increased my knowledge about the Holocaust and the atrocious things that were going on, the travesties and the resilience of the survivors,” said Hawks’ Elton Brand. “It’s just amazing how evil people can be.” For the 15-season NBA veteran, the message to take took from the museum was about speaking out against evil. “You can tolerate it and say, ‘Hey, it doesn’t affect me.’ We’re all people and if someone doesn’t stick up for the next group, when your group is persecuted like that then you’re on the line,” Brand said.