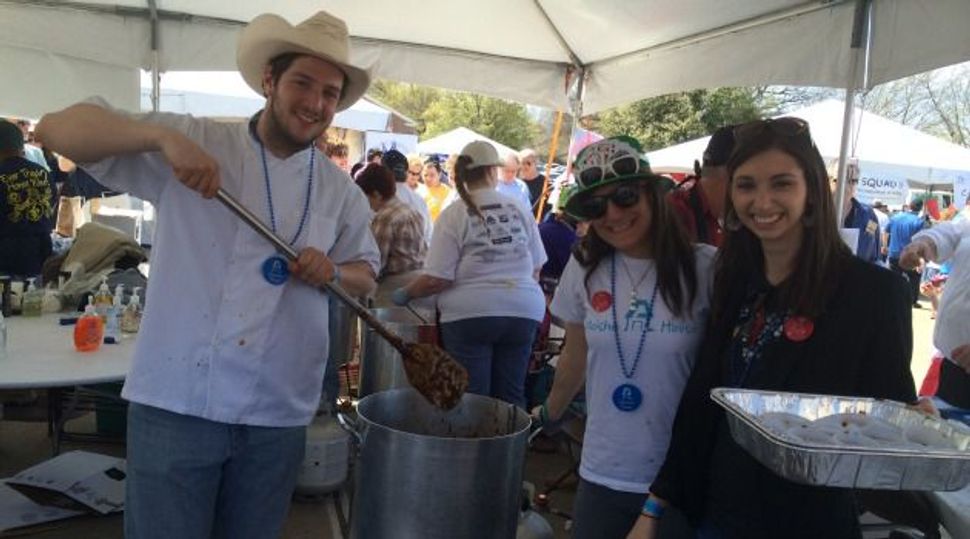 Hot Moishe! The winner of the People?s Choice award at the 2014 Dallas Kosher Chili Cookoff was Moishe House, represented by Austin Litoff (with big stirrer), an alumnus, with residents Jaycee Greenblatt (center) and Elissa Riesenfeld (right). Image by rob kutner

“You want to try the Republican chili?”

That’s the kind of invitation I got, repeatedly, from many of the 50 contestants at this year’s Dallas Kosher Chili Cookoff. And after trying the Republican Jewish Coalition’s surprisingly garlicky spoonful, I faced a Jewish institutional smorgasbord. Whose culinary sensibilities would I sample next — those of the Anti-Defamation League, or those of the Hebrew Men’s Poker Association?

And beyond the numbers, it’s an appealing stew that attracts participants from diverse parts of the community. Judy Safern, president of public relations firm Leading Thinkers and my guide for the day, pointed out “a left-wing shul serving chili side by side with a right-wing outreach organization.”

For event co-chair Ed Jerome, this is the point: “We have the Democrats, we have the Republicans, from the nonaffiliated all the way through the black hats.”

It’s also the rare Jewish event where (nearly all) the organizations reach ideological agreement on one point: “Vegetarian chili isn’t chili.” (Though don’t tell that to the hopefuls in the “veggie chili” competition.)

Achieving unity through chili was the brainchild of Dan Prescott, former vice president of the Jewish Federation of Greater Dallas. He put the initial event together along with fellow members of Tiferet Israel — A Traditional Congregation, Jack Baum and Mark Kleinman. Prescott said that in the early 1990s, “the community was a little fractured, and we were looking for a way for everybody in the Dallas Jewish community to pull together, find some common ground. Since we’re Jewish, we thought food, and since we’re Texas, we thought chili.”

In its first year, 1993, the event attracted 12 teams and 600 attendees and, Prescott said, “we went to Home Depot and got paint-stirrer sticks to stir the chili with.” This year, it featured 50 teams and more than 4,000 attendees, and “we’ve graduated to large spoons.”

It’s a near-military operation for the annual hosts at Tiferet Israel. This year, Jerome is joined by co-chairs and TI members Linda Greenberg and Diane Goldblatt. They say planning began last year, on June 1 (for a March 30 event) and involved more than 250 volunteers.

The synagogue also hosts a mandatory series of preparatory meetings for would-be chili chefs. These classes teach the logistics of a strictly kosher cooking competition: In addition to following all city health rules, all ingredients must be kosher certified, all equipment is provided by the venue and all cooking must take place at the event, under full rabbinical supervision.

That supervision comes from Klein and Rabbi David Shawel, who oversee an army of mashgichim, kosher supervisors — after whose lighting of the cooking fires (a little after 7 a.m., “right after Shacharit”), the cook-off begins.

Then the cooking lasts until the public is let in at 10:30 a.m., and judging begins an hour later. A winner is announced at 3 p.m.

This year’s competition looked about as fierce as a parking lot full of beaming, T-shirt-wearing Jews can get. Recurring champion and People’s Choice favorite Moishe House (a national network of houses where service-oriented Jewish youths live together) claimed to be “mixing it up” chili-wise, adding more “spicy and sweet.” Personally, though, my money was on last year’s second-place finisher, the Hebrew Free Loan Association, whose concoction packed a tasty tang.

Frequent contestant Howard “Chaim” Goldfeder said of the competition, “There are some guys out there who take this as serious as women’s softball.” But for the most part, it’s not about the competition so much as the camaraderie. “[With] over 50 teams,” Goldfeder said, “20 or 30 don’t expect to win.”

Jerome agrees, arguing that the chili cook-off is more about community and tzedakah, charity. TI always shares the proceeds of this fundraiser with a handful of nominated local charities. This year’s co-beneficiaries are the Bnai Zion Foundation, a humanitarian group; the Fighting Maccabees Jewish Special Olympics team, and the Veterans Recovery Center of the Dallas VA Medical Center. Prescott continues to seek creative corporate sponsorships, such as from Rolaids. However, he drily noted, “They kind of stopped returning our calls.”

Of course, there have been controversies. Recent years saw a dispute between a few individuals, who wanted a woman to sing the national anthem, and traditionalist religious groups, whose men are forbidden from hearing a woman sing. The most common complaint voiced, though, is “judge-fixing.”

Jerome had a ready response to that: “The judges are available to be bought, but it has to be part of the charity auction, so tell us how much you want to contribute.”

Still, secrecy is zealously maintained. The judges, all of them volunteers, spend the whole cook-off sequestered in an “undisclosed location,” guarded by an officer of the Dallas Police Department, and to which runners bring number-only identified sample cups of red-hot goodness.

Or sometimes not, judge David Feder said, admitting, “Some of these tasted like bug spray.” Judge Harriet Gross revealed, “I heard another judge say, ‘If one is the lowest, give this one zero.” Still, both agree that the flavor standard is much higher this year, also noting trends like “heavy on the cumin,” “less garlic” and “an almost complete drop-off in cilantro.”

Feder and Gross were joined on the judging panel by a range of others, including a professional chef and two members of the Dallas City Council. This type of mix is intentional, Jerome said, noting, “If you live in Texas, you’re a chili expert anyway.” Unsurprisingly, the judges’ most heated arguments were not about chilis, but about “school charter policy.”

In the end, neither Moishe House nor those upstart free-loan givers held the winning ladle, as the top three judges’ honors went to a Camp Young Judea/Tel Yehudah joint team, Henry Litoff, and the Ann & Nate Levine Academy (with top “veggie honors” grudgingly going to the home team, Tiferet Israel).

But Prescott remains above the fray — and not just because his pick, Akiba Academy, didn’t make the top three. “The win for us is not whether our chili is first, second or third. The win for us is seeing the community come out in droves to have a good time, to meet and greet other people in the community, and to eat kosher.”

Rob Kutner is a writer for “Conan” and previously “The Daily Show With Jon Stewart.” After the March 30 cook-off, his colon is still not speaking to him.