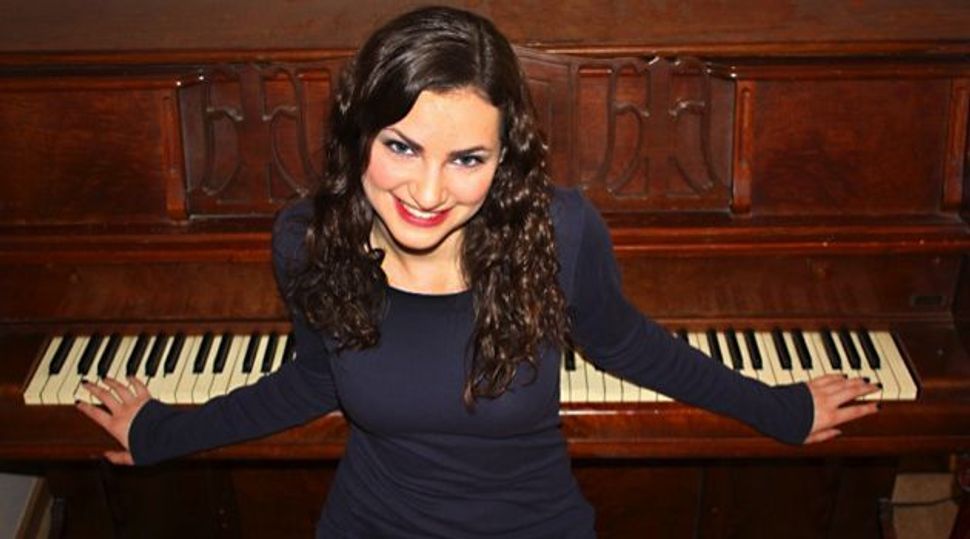 Image by Courtesy of Talia Lakritz

Talia Lakritz, 20, a Modern Orthodox Jewish sophomore at Barnard College, and her two girlfriends got off a very crowded No. 3 train at Kingston Avenue in a fevered hurry of glee, as they headed to an open-mic night for women at the gallery at The Creative Soul, an organization in the Crown Heights section of Brooklyn.

Inside the gallery, new mothers cradled their crying babies, and teenage girls clutched their guitars, waiting for a turn to try out new material.

One by one, the women shuffled onstage. Most performances were about the Jewish faith and God. One woman read a short story on the struggles of motherhood and marriage. Another performed a traditional Hebrew song and urged the crowd to join in, creating a sometimes patchy but mostly harmonious choir of soft melodies.

“This is so cool!” said Tova Kamioner, 20, one of Lakritz’s friends. “Who knew this existed?”

The women only open-mic night provides a creative outlet for women who observe kol isha, the halachic prohibition that prevents women from singing in front of men who aren’t their husbands.

Finally it was Lakritz’s turn. She perched herself on a stool in front of a keyboard and belted out an original song she calls “Superhero,” an upbeat pop melody with lyrics that read, “They say all the good ones are taken or gay.”

“I guess it’s not typical of what other religious women are writing,” Lakritz said after her performance. “But I never have a problem when I sing it.”

Lakritz, a native of Milwaukee, is considered a star among the crowd of amateurs. As a member of The Jewish Women’s Talent Agency, a not-for-profit organization known as JeWTA that was created last year to foster Orthodox female artists, she’s made a name for herself in Crown Heights and beyond, setting up her own blog and YouTube page and performing whenever she can. In order to dissuade men from watching her, each online video begins with a disclaimer suggested by her rabbi: “For Women’s Eyes Only.”

“From time to time, I get some creepy messages from guys, saying, ‘Please, can I see your videos?’” Lakritz said with a laugh.

While Lakritz has found an audience despite halachic restrictions, she says that abiding by the rules is sometimes frustrating.

“I hear people say kol isha is liberating because it frees women from men’s expectations, but it doesn’t make dealing with it any easier,” she said. “Sometimes when there’s a mixed-gendered open mic night at my school, I just want to get up there and perform, but I can’t.”

Lakritz said her first encounter with both kol isha and negiah, the Jewish law that forbids touching a person of the opposite sex — with the exception of one’s spouse — came when she had to hold a boy’s hand and sing together in her second-grade school play.

“After that, my parents sat me down and said maybe I should stop performing with boys onstage,” Lakritz said. Despite that incident, she said, her parents always supported her singing career.

Most rabbis believe that kol isha is open to interpretation. Some authorities forbid a man from hearing a woman’s singing voice at all times; others permit it when the voice is on the radio and the listener does not know what the singer looks like. Some forbid it even then. Kol isha has recently become a source of controversy in Israel; last year, a teenage girl, Ophir Ben Shetreet, was suspended from an Orthodox school for her performance on Israel’s version of “The Voice.”

According to Adena Blickstein, the 31-year-old founder of the JeWTA, most Orthodox artists who belong to her organization say their rabbis deal with kol isha on case-by-case basis. The organization includes singers, comedians, actresses and dancers — like Blickstein herself — who all struggle to perform within the confines of Orthodoxy.

“They have to deal with observing the Sabbath, dressing modestly and making sure men don’t see them perform, so it can be limiting,” Blickstein said. “These women are determined to reach an artistic level without compromising what they believe in.”

So far, Blickstein’s agency has signed seven artists. Each performer has a headshot taken, is given a mentor and is set up with gigs based on her level of observance.

While most of the artists choose to abide by kol isha, one of the agency’s dancers, Anna Schon, 28, recently toured the United States as part of an African-American dance company, The Reggie Wilson/Fist and Heel Performance Group. Though she doesn’t dress conservatively onstage, and dances with a male partner for a gender-mixed audience, Schon, who is Modern Orthodox, said she makes sure there is a divide so the art world never enters her “real” life.

“I’m blessed to be able to live out a totally different personality onstage, and that keeps me following the Jewish faith,” said Schon, who grew up in Riverdale, a neighborhood in the Bronx. “Where I grew up, my rabbis gave me other options. I know it’s not like that everywhere.”

When it comes to singing, many people like Schon believe it is the man’s responsibility to leave the room and close himself off from the female voice. But Elana Sztokman, an Orthodox feminist writer, said she thinks that, like women, men should make their own decisions about kol isha.

“Maybe there will come a time when a man can say, ‘I can be in the presence of a woman and not view her as a sex object,’” Sztokman said. “It’s a voice that says, ‘I can see a woman as not the opposite of religion, but just as a person singing a song.’”

Leeor Bronis is a multimedia journalist living in New York City. She recently graduated from the CUNY Graduate School of Journalism.