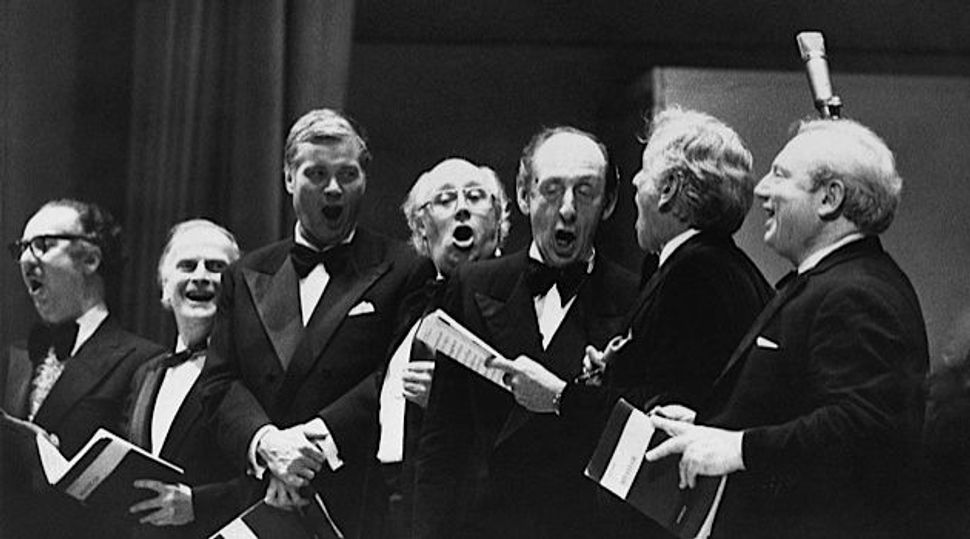 Musical Dupes? (From far right) Isaac Stern, Leonard Bernstein, Vladimir Horowitz and others join together for the Hallelujah Chorus. Image by AP Photo

I recall walking through the lobby of Jerusalem’s King David Hotel around 1978, when TVs were blasting the Israeli broadcast premiere of Handel’s “Messiah.” Sung in Hebrew and played by the Israel Philharmonic, this “Messiah” supposedly deleted every mention of Jesus. With or without Jesus, music-loving Jews tend to enjoy “Messiah,” which makes Michael Marissen’s new book “Tainted Glory in Handel’s Messiah” all the more troublesome.

Marissen is a Swarthmore College professor, and the use of the word “tainted” in the title suggests a muckraking exposé of the kind that gleefully tells shoppers their microwavable tacos contain horsemeat. Marissen’s message is nearly as visceral and alarmist: “Messiah” is an anti-Jewish work, and its famed “Hallelujah” chorus represents triumphal gloating over the Roman destruction of Jerusalem’s Second Temple in 70 C.E. In the aria “Thou shalt break them with a rod of iron,” the “them” to be broken are Jews.

In a 2007 New York Times essay accompanying a scholarly article, Marissen asserted that “Messiah” was “designed to teach contempt for Jews and Judaism… [It] is not a matter of so-called racial anti-Semitism but rather of exulting over misfortunes of the religion of Judaism and of its practitioners.” Marissen even claimed that some musical figures are “meant to throw a sharp light on the loathsome characteristics ascribed in the [New Testament] to the Jews.”

To justify his arguments, Marissen noted that Charles Jennens, who compiled the text for “Messiah” mostly from the Old Testament, owned a volume of anti-Semitic sermons, Richard Kidder’s 1726 “A Demonstration of the Messias: In which the Truth of the Christian Religion is proved against all the Enemies thereof; but especially against the Jews.” Yet how Jennens, not to mention Handel, felt about this book remains moot.

Other Handelians, including Ruth Smith of Cambridge University, author of “Handel’s Oratorios and Eighteenth-Century Thought,” promptly refuted Marissen’s assertions. Writing for NYTimes.com, Smith opined that while “Messiah” promotes Christianity, its purpose was not “repudiation of, and hostility toward, Judaism.” Nor has posterity recorded any anti-Semitic statement by Handel or Jennens. On the contrary, John Hawkins’s “General History of the Science and Practice of Music” describes Handel as relishing constitutionally protected religious tolerance in England.

Princeton University professor Wendy Heller, author of “Music in the Baroque,” concurs with Smith. She dismissed Marissen’s attempt to “distort evidence, fuel outrage, or analyze Handel’s music in ways that contradict everything we know about him as a composer.” Regarding Marissen’s suggestion of an implicit anti-Jewish message in “Messiah,” Heller explained: “These claims run contrary to everything we know about Handel’s aesthetic and his very approach to composing music.” She added that the presence of trumpets and drums in the “Hallelujah” chorus does not indicate that Handel was kvelling over the Temple’s destruction, since similar orchestration occurs in other Handel works. This argument seems only reasonable; otherwise, a 1959 recording of “Messiah” conducted by Thomas Beecham would presumably be even more anti-Jewish because its orchestrator, Eugene Goossens, added clangorous marching band cymbals, piccolo and triangle to the “Hallelujah” chorus.

An even more resounding rebuttal was a 2010 article in the Journal of the American Musicological Society by John Roberts, a professor emeritus of musicology at the University of California, Berkeley. Like Heller, Roberts rejected Marissen’s analysis of the “Hallelujah” chorus as “over the-top triumph” over the fall of Jerusalem because of the presence of drums and trumpets. The point of this chorus, as audiences have instinctively felt for generations, says Roberts, is to depict all-embracing godliness, not gloat over Jewish woes. “There is scant reason to interpret ‘Messiah’ as intentionally anti-Jewish,” Roberts wrote. “Too often Marissen’s presentation of evidence is tendentious, his reasoning forced, his conclusions exaggerated… [T]he supposed evidence is presented in a highly inflammatory way. We have passed beyond historical inquiry into the realm of propaganda.” Roberts chided Marissen for using “flawed arguments based on questionable evidence to enforce a meaning that most of [his] readers are bound to find offensive,” resulting in a “disservice to [musicology].”

By contrast, Alexander Ringer honored the field of music research with his 1961 article “Handel and the Jews.” A survivor of the Bergen-Belsen concentration camp and professor at the University of Illinois, Ringer cited Nietzsche, who praised Handel’s “Judeo-heroic trait which gave the Reformation a touch of greatness, the Old Testament, not the New, become music.” Handel’s numerous Old Testament-inspired oratorios include “Belshazzar,” “Deborah,” “Esther,” “Israel in Egypt,” “Jephtha,” “Joseph and his Brethren,” “Joshua,” “Judas Maccabaeus,” “Samson,” “Saul” and “Solomon.” For Ringer, in “Esther” Handel identified the “Jewish cause with the humanitarian strivings of an era dedicated to social progress… [Handel’s] preoccupation with a persecuted minority, his relentless glorification of their ancient greatness, reflected the measure of his sense of humanity and his unshakeable faith in the possibility of human progress… His deeply rooted admiration for, and understanding of, the heroic history of ancient Israel became inseparable from his respect and friendship for the Jews whom he had come to know personally.”

Ringer pinpointed the apotheosis of this feeling in Handel’s “Judas Maccabeus,” where the eponymous hero symbolizes a British military hero, the Duke of Cumberland, just as Handel would pay homage to King George II of England in the title character of his “Solomon.” Marissen has objected that such themes were not “pro-Jewish. Handel and his contemporaries did have a high opinion of the characters populating the Hebrew Bible, not as ‘Jews’ but as proto-Christian believers in God’s expected Messiah, Jesus.”

Yet this distinction, if it existed, was ignored by Handel’s Jewish contemporaries. In 1759, Jacob Saraval, a Venetian rabbi, prepared a Hebrew-language translation of Handel’s “Esther,” apparently for a performance at an Amsterdam congregation’s Purim shpiel. Seven years after Handel’s death, London’s rebuilt Great Synagogue in Duke’s Place was consecrated with music, including one of Handel’s coronation anthems. This pioneering use of non-Jewish music in a synagogue may be seen as a tribute to the artistic inspiration Handel took from Jewish history, as is the longtime inclusion by many synagogues of Handel’s melody “See, the conqu’ring hero comes” from “Judas Maccabaeus” as part of Passover observance.

Handel also inspired persecuted 20th century Jews. In 1933, Nazi officials formed a Jewish Culture League to control German Jewish cultural expression. Among the few German compositions Jews were allowed to perform in the Culture League were Handel’s Old Testament-based oratorios. Even after the League was dissolved in 1941 and its musicians deported, “Israel in Egypt” and “Judas Maccabaeus” were reportedly performed in Theresienstadt as examples of Jewish pride. Were these performances wrong-headed? Could Jewish audiences who relish the humane, all-inclusive emotion of the “Hallelujah” chorus as conducted by such inspired maestros as Colin Davis and Robert Shaw, be mistaken?

The answer appears to be no.