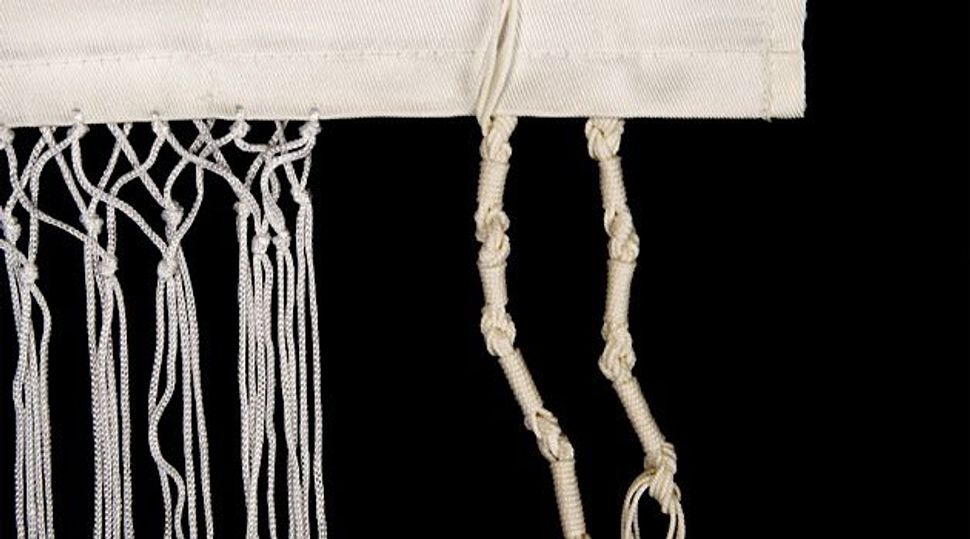 Fringe Festival: Making tzitzit involves pushing three short strings and one long one through a tiny eyehole. Image by Thinkstock

Since biblical times, male authorities have been debating the issue of whether women should sport tzitzit. Now, thanks to a freshman from Princeton University, a group of young women are — quite literally — taking this fiddly law into their own hands.

Maya Rosen, 19, has been wearing tzitzit for three years, making her own for two, and last week launched Netztitzot, a not-for-profit organization that will sew and sell tzitzit for women.

“At first, I felt very isolated when I started wearing tzitzit,” she said, noting that while women have conquered ground in terms of Jewish learning, becoming rabbis and wearing yarmulkes, donning tzitzit hasn’t yet made the jump. She believes the reason is predominantly practical: Men’s tzitzit don’t comfortably fit most women, and ladies’ tzitzit don’t exist.

“There must be a better way,” she thought.

Some 50 people gathered in an apartment in New York’s Morningside Heights to help Rosen tie strings onto Netzitzot’s first batch of tzitzit. She had prepared 60 white H&M ladies’ vests with the help of two seamstresses, by separating the front and back of the garment via the side seams and attaching reinforcements to each of the four corners.

Making tzitzit is a tricky business: It involves pushing three short strings and one long one through a tiny eyehole in the corner of the vest, and wrapping the longer string around the others numerous times, each coil separated by two knots. Accomplish that, and you’ve done just one corner out of four.

One woman at the event said that there’s something quite feminine about tying tzitzit; it’s a bit like making a friendship bracelet.

In fact, the action of disentangling long threads and firmly pushing them into small, unwelcoming spaces seems to be somewhat metaphoric of the very plight of women who want to wear tzitzit and of the wider battle for gender equality in traditional Judaism.

The obligation to wear tzitzit is first seen in Numbers 15, which states: “Speak to the children of Israel and say to them, ‘They shall make for themselves fringes on the corners of their garments… and when you see it, you will remember all the commandments of God and perform them.’” Accordingly, many see tzitzit as a physical expression of the very idea of observing commandments, because the wearer has two fringed corners in front of them and two fringed corners behind them.

This passage from Numbers is the same text used in the third paragraph of the Shema, Judaism’s most fundamental creed. Sarah Wolk, 26, told the Forward at the Netzitzot event that the importance of this script is one of the reasons she started wearing tzitzit two and a half years ago.

“I was [praying] every day, and it didn’t feel right to be saying the Shema and not doing it. It just wasn’t consistent,” she said. “I like that [wearing tzitzit] is a physical, tactile, tangible mitzvah. Judaism is very ‘heady’ — you can get distracted with words.” For Wolk, wearing tzitzit is part of a uniform in the same way that others might wear a skirt or a yarmulke; it’s her way of reminding herself and showing others that she is Jewish.

The question of whether the law of tzitzit applies to women as well as men appears in the Talmud, which says in tractate Menachot 43a, “The rabbis taught: all are obligated in the laws of tzitzit: Priests, Levites, Israelites, converts, women and slaves.” It adds the opinion of Rabbi Shimon, who says that women are exempt because tzitzit is considered a positive time-bound commandment, which is not mandatory for women.

In the paraphrased words of the medieval Jewish authority Maimonides, however, there’s nothing stopping women who want to observe non-obligatory commandments from doing so. But there are also eminent authorities who rule differently, and even today, traditional Judaism frowns upon women wearing tzitzit. This is usually true for two reasons: the law prohibiting women from wearing men’s clothes, and the idea that it is arrogant or contrarian for a woman to voluntarily adopt this commandment, likely seen as a form of protest. As men aren’t even obligated to go out of their way to wear tzitzit — the law just stipulates that if a man happens to wear a four-cornered garment, he should put fringes on it — women who adopted this mitzvah were seen as over-pious.

Those who oppose women laying tefillin cite the same two reasons in their arguments. The issue surged recently after SAR, a Modern Orthodox high school in Riverdale, N.Y., gave permission for two of its female students to don tefillin in daily morning prayer.

Women wearing tzitzit is the younger sibling of this controversy: Still in its infant phase, the movement hasn’t (yet) made headlines in the same way in the United States. In Israel however, dozens of women have been arrested at the Kotel for wearing a tallit, a version of the tzitzit worn over the clothes during prayer.

As with many religious practices, the public perception of this Jewish ritual is informed by much more than legal discourse.

“You have to look at the anthropological picture here,” explained Rabbi Ethan Tucker, co-founder and head of the yeshiva at the egalitarian learning program Mechon Hadar. He pointed out that the mitzvah of tzitzit is viewed differently from other “men’s commandments” such as blowing the shofar or sitting in the sukkah, because its fulfillment involves wearing a garment. “At least to some external eyes, women were wearing men’s ritual garb in a way that even if tzitzit were not intrinsically male, it came to be perceived as a thing that men wore and women did not. It might have been jarring to people — a kind of ritual cross-dressing.”

That could be part of the reason why tzitzit hasn’t become popular among women yet. Meggie O’Dell, 26, a rabbinical student at the Jewish Theological Seminary, started laying tefillin long before she started wearing tzitzit, because “tefillin never felt male… it never occurred to me that it was a gendered thing.” Tzitzit, on the other hand, were available only in shapes and sizes that would suit a manly body. That did not appeal to O’Dell, who covers her head but does so with a large flowery headband rather than a man’s yarmulke. Making her own tzitzit, which she wears tucked in and considers a private mitzvah not visible to others, allowed her to fulfill her egalitarian understanding of Jewish obligation without succumbing to the legal issues of wearing men’s clothing or using the ritual as a form of protest.

For these women, wearing tzitzit isn’t about sticking it to the man. They see little of themselves in the women of earlier Judaism, who were excluded from men’s privileges on account of public propriety or a lack of education. Today, however, “it’s not so obvious that Jewish law exempts contemporary women from these [commandments],” said Tucker. “It’s a new moment now, where a generation of people who see themselves as part of the traditional camp of rigorous mitzvah fulfillment are seeing the tradition being refracted through the reality of our time.”

Not everyone accepts this modern interpretation of traditional Judaism. As Rabbi Mayer Twersky, head of Yeshiva University’s rabbinical seminary, wrote in a recent post for TorahWeb.org, “Overturning five hundred plus years of precedent and overwhelming consensus is anything but simple.”

But Maharat Rachel Kohl Finegold, a director at Quebec’s Congregation Shaar Hashomayim and one of the first Orthodox women to be ordained as a spiritual leader, said that there often is space in Halacha for women to be involved. “It just looks different to what the community is used to seeing, and that creates a lot of hesitation.”

Tucker views the question of women’s tzitzit-wearing as relevant to the entire Jewish community. “It’s not a question of [female tzitzit-wearing] starting, or even finding its greatest support, in any given movement,” Tucker said. “It’s in a new group that spans certain boundaries, made up of people that have been educated and had experiences in a bunch of different places.”

Indeed Rosen, just like several of the other men and women tying tzitzit at Netzitzot’s launch event, says she does not identify with any specific denomination.

That evening, O’Dell shared with the Forward a conversation she’d had with her rabbi before she started wearing tzitzit last summer. “My rabbi asked me why I didn’t wear tzitzit,” she said. “I replied: ‘Because no one’s ever invited me.’”

It’s this invitation that Rosen wants to extend to other women through Netzitzot.

“This is about giving people access to mitzvot and to Torah,” Rosen said. “This belongs to all of us.”

Lauren Davidson is a freelance journalist based in New York.