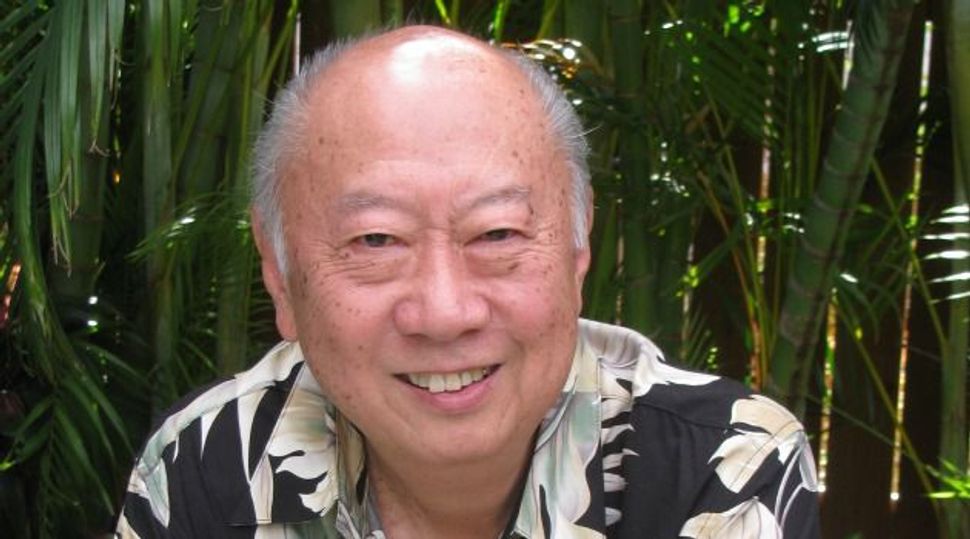 Mazel Tov: Alvin Wong was informed by The New York Times that he is the happiest man in America. Image by Courtesy of Alvin Wong

Three years ago, Alvin Wong received a call from The New York Times. After asking him a few questions about his demographic background, the excited reporter on the line gave Wong a piece of news that would upend his life: He was the happiest man in America.

His first response was utter disbelief.

“Who would ever have thought? You’re sitting around in your house, and someone says you’re the happiest guy,” Wong said. “I said, ‘Is this a practical joke that you guys are playing on me?’”

The reporter, Catherine Rampell, wasn’t kidding. The New York Times had asked Gallup, the polling firm, to assemble a statistical composite of the happiest person in America, based on its 2011 report on American well-being.

Gallup’s data painted a surprising picture: The hypothetical happiest American would be a tall, Asian-American man over 65 years old, who lives in Hawaii, is married with children, owns a business, earns a household income of more than $120,000 a year — and is an observant Jew.

In other words, Alvin Wong.

The 5-foot-10-inch Honolulu senior citizen was born to Chinese parents, is happily married and has two children. A convert to Judaism, Wong is active in his synagogue and keeps a kosher home. At the time, he ran his own health care management business and earned more than $120,000 a year.

The next day, the Times published a small article about Wong, noting that, by his own admission, “he was indeed a very happy person.”

Overnight, Wong became a celebrity in Hawaii and received worldwide media coverage. For six months, his phone rang off the hook. with calls coming in from the likes of Good Morning America and ABC World News. He has appeared on television and radio more times than he can count. A short independent film released in 2013, “The Happiest Person in America,” was inspired by his story.

“He called me one day and said: ‘Somebody just told me I went viral. What does that mean?’” his daughter, Shaaroni Wong, related.

All the attention led Wong, now 72, to start contemplating his own sunny disposition and to check out academic research on happiness. Determined to share his happiness with others, he decided to lecture on the art of contentedness. He has become a kind of happiness guru. “I’ve taken this on now as a life mission, to explain what happiness is all about,” he said.

Three years after his selection, the speaking invitations still roll in. Wong appears regularly at the many professional conventions held in Honolulu. He has spoken to schoolchildren, University of Hawaii donors and the Hawaii chapter of Hadassah. When the Forward called for an interview, Wong was preparing to address the Hawaii State Senate during its daily “moment of contemplation.” In the coming weeks, he will be featured on a PBS program about prominent Hawaiians.

But Wong says he has declined book deal offers. And he does not accept money for his speaking appearances; he is not interested in making money on his fame. “If I didn’t volunteer, and I was doing it as a business, I wouldn’t be as happy, would I?” he said.

His newfound title also brought a twinge of sadness. Many of the people who call him are not reporters, but unhappy people trying to discover his secret. “You get all these calls from India, Thailand, Russia, England, and they’re asking the same question: [What is] the secret of your happiness?” he said. “It made me unhappy in the sense that everyone was looking for the secret for happiness. It was eye-opening.”

Sometimes callers can be obnoxious, too. A rabbi once called and spent 30 minutes lecturing Wong on why Jews could not possibly be the happiest religious group because of their tragic history. Wong listened politely. “I never hang up. That’s rude,” he said.

Wong says that this sort of humility is the key to his happiness. “Humility teaches me that I don’t know everything, that I’m not the most important person,” he said. “If you don’t listen, you’re not going to learn anything.”

Since 2008, Gallup and Healthways, a health and wellbeing improvement company, have conducted the survey that indirectly enshrined Wong. It technically measures not happiness, but well-being, including basic needs, like financial security, physical and emotional health, and access to food and shelter.

Jews have ranked consistently as the religious group with the highest well-being since the survey began, even when controlling for other key factors, like income and age.

Wong flirted with Catholicism as a young man, and did not become a member of the happiest tribe until he was in his 30s, before marrying his wife. But his Jewish identity plays an important part role in fostering the humility he says he needs to be happy.

“Judaism teaches us that your heaven or hell is made here on earth by the deeds you do,” he said. “People will miss you or not miss you. Their thoughts about you is how you are remembered. If that doesn’t keep you grounded, I don’t know what will.”

According to the survey, greater religious observance is tied to higher well-being across all religions, including Judaism — but the survey did not define observance. Rampell needed to find an observant Jew, and she decided that Wong fit the bill after learning that he keeps a kosher home. “Catherine Rampell said, ‘I don’t know what [observant] means, but we’ll consider that since you are kosher, you are an observant Jew,’” Wong related.

Wong is not Sabbath observant according to traditional Jewish law and does not attend services on a weekly basis. Still, he considers himself observant, though he accepts that others might not. “There’s degrees of being observant,” he said. “You may have different interpretations.”

Wong says he feels most comfortable in the Conservative movement, and attends Sof Ma’arav, the westernmost Conservative synagogue in the world. The Wongs’ Passover and Hanukkah parties are well known in the Jewish community — and for good reason. Wong estimates that he and his wife own 96 menorahs, which are proudly displayed during the holiday.

Still, Wong finds he must be assertive in demonstrating his Jewish identity, because he is Asian American. “When you say, ‘I’m Jewish,’ a lot of people here in Hawaii think, ‘Well you’re Caucasian and that’s it,’” he said. “[They] don’t realize that you’re referring to a religion and not an ethnic group.”

One of the wellsprings that sustains Wong’s happiness is his straightforward but optimistic view of setbacks, from high school breakups to deaths in the family to the time he nearly died as a 6-month-old during the Pearl Harbor attacks. He rarely broods over anything. “I guess my attitude has always been, you’ve got to go forward,” he said. “When you have a failure, when you have something that happens to you that is traumatic, what you have to do is learn from it, but move on and not let that happen again.”

He attributes his attitude to the values he imbibed while growing up in postwar Hawaii, where Asian cultural norms of respect and humility were highly valued. Today, he feels his Asian and Jewish backgrounds complement each other. “When I was converted, my mom said, ‘Judaism is one of the oldest cultures in the world, and the Chinese culture is, too,’” he said. “There was never a sense of clashing of two cultures.”

Another key to happiness, according to Wong, is learning to laugh at yourself. “Happiness is, I don’t think of myself too seriously,” he said. “If you can’t laugh at yourself — at all your problems [and] mistakes — then you’re going to go through life a very unhappy person. This has always been my philosophy.”

Family members say Wong continues to laugh at himself and remains humble despite his fame. But they like to help make sure he stays that way. “I reminded him that Happy was maybe not the brightest of the [Seven] Dwarfs,” Shaaroni Wong said.