Did Smirking ‘Nazi’ Gunman Single Out Jews for Death in Kansas City Rampage? 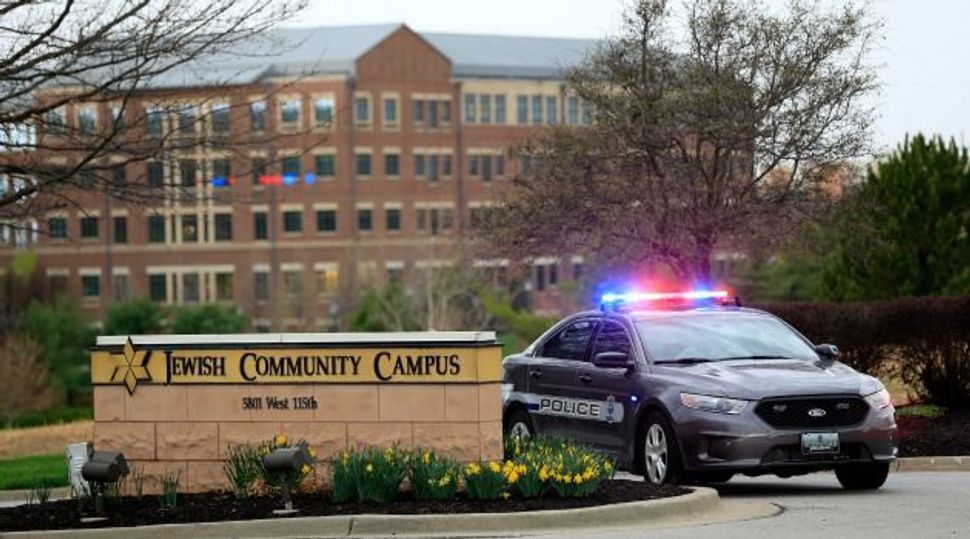 Deadly Scene: The JCC in Overland Park, Kan. was packed with teenagers participating in a talent contest when a gunman opened fire. Image by getty images

A smirking gunman who reportedly shouted Nazi slogans opened fire at a Jewish community center and an old-age home in a suburb of Kansas City, killing three people.

“Asking someone if you are Jewish before shooting sounds very much like a hate crime,” Mandl said.

Police said two people were killed at the JCC of Greater Kansas City, where children were auditioning for a musical. Despite Mandl’s assertion, the JCC victims were identified as churchgoing teen Reat Griffin Underwood, 14, and his grandfather, William Lewis Corporon.

Rev. Adam Hamilton shared the tragic news at an evening Palm Sunday service at the United Methodist Church of the Resurrection in Leawood, Kan., where both victims were congregants, the Kansas City Star reported.

“Help us, oh, Lord to grieve as people of hope,” Hamilton told congregants, the paper said.

The third victim, a woman, was shot at Village Shalom, an assisted living facility about a mile away from the JCC. The victim at the retirement home was an elderly woman who was shot as she walked out of Village Shalom, Mandl said.

Police said two other people were fired upon but not hit.

President Barack Obama offered condolences. “While we do not know all of the details… the initial reports are heartbreaking,” he said in a statement.

The gunman, described as a bearded white man in his 70s who is not from Kansas, was armed with a shotgun, a handgun and an assault weapon. Police are still investigating which weapons he used in the attacks.

Multiple reports said police arrested a suspect nearby, who was overheard shooting ‘Heil Hitler’ as he was taken into custody.

“I have been told he was yelling ‘Heil Hitler’ as he was being led away,” Mandl told CNN.

Neighbors said he was smiling, the Kansas City Star said in a Tweet.

The gunfire the JCC came as hundreds of high school singers from across the Kansas City area gathered to audition for the KC SuperStar contest and actors were rehearsing for a production of “To Kill a Mockingbird.”

“There were tons of kids because this was about to start at 1 o’clock,” said Ruth Bigus, the publicist for KC SuperStar, told the Star.

One of the victims was killed in the JCC parking lot, KCTV-TV reported. An eyewitness told Fox News that a man wielding a shotgun also opened fire in the JCC theater, where auditions for a teen theater group were underway.

“My son and I were walking into the Jewish Community Center this afternoon for an umpire clinic, around the west side, and all of the sudden we heard a gunshot, a pretty loud gunshot,” Mike Metcalf, an area resident, told Fox News.

“I turned to look to my right and I can see a man standing outside a car with a shotgun, what to me looked like a shotgun, and there was somebody laying on the ground.”

A JCC member, Mark Brodkey, told a KSHB-TV photographer that the gunman shot the windows out of his car after pointing the gun at him.

The shooting came just hours before the start of Passover. “The timing is terrible,” Mandl said.

Police beefed up security at other Jewish sites and synagogues across the metro area.

Douglass said there were no threats made against Jewish targets and he had no way of knowing if the crime was linked to the approaching Passover holiday.

“This was totally unexpected,” Douglass said.

Kansas City Mayor Sly James said he was outraged at the “senseless violence.”

More senseless violence leading to tragedy in our region! This has to stop. Prayers for injured and their families. #KansasCity

“We will pursue justice aggressively for these victims,” Brownback said in a statement.

A spokeswoman for Overland Park Regional Medical Center said the hospital was treating a 14-year-old male who suffered a gunshot wound and who was in critical condition.

Located in Kansas state, Overland Park is a sprawling suburb of Kansas City, Mo. It has a population of 178,000.

Did Smirking ‘Nazi’ Gunman Single Out Jews for Death in Kansas City Rampage?