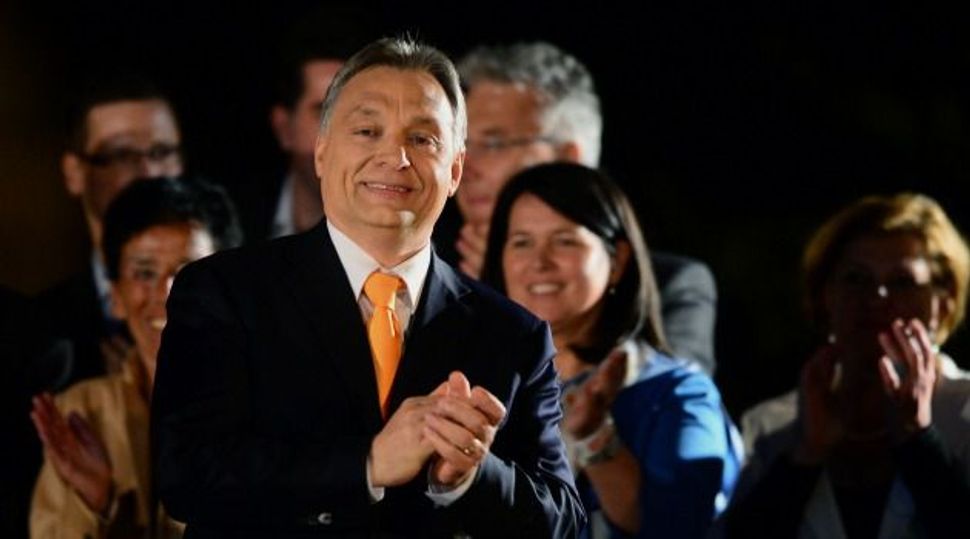 In 2009, Csanad Szegedi was euphoric when Jobbik, the radical right-wing nationalist party he co-founded, placed third in Hungary’s elections for the European Parliament, winning enough votes to send three representatives to Brussels, including himself.

But after Hungary’s elections for parliament April 6, Szegedi is shaken. The party, many of whose leaders are seen as racist and anti-Semitic, increased its share of the vote to 20% from 16% in the 2010 parliamentary election. Now Szegedi, a former Holocaust denier who discovered in 2012 that he himself was Jewish, sees darkness ahead.

“It’s very bad for the Hungarian society,” said Szegedi, who today takes Torah lessons, wears a yarmulke and goes by the name Dovid. “This brings out such conflict that it will take tens of years to get it back to normal.”

With this election, Jobbik, whose leaders have depicted Hungarian Jews as a threat to national security, became Europe’s most successful ultranationalist faction. Its members will serve in a parliament dominated by Prime Minister Viktor Orban, leader of the conservative Fidesz party, who was re-elected for a third term. But Orban and his party, Fidesz, pose their own challenges to Hungary’s Jews.

Orban depicts his faction as the only bulwark holding back Jobbik’s surging radical right tide. Yet many in Europe see Fidesz’s staunch nationalism as a threat to democracy, too. Its support for rewriting Hungary’s history with regard to the Holocaust is one aspect of Fidesz’s role that gives Hungary’s Jews scant solace.

Three days after the election, about 100 Jewish and non-Jewish Hungarians joined together to protest the government’s construction in Budapest of a controversial memorial to World War II. The commemorative statue will depict Hungary as the archangel Gabriel, attacked by Nazi eagles. The protesters decry this memorial as a lie that covers up Hungary’s years of cooperation with Hitler during World War II under its leader, Admiral Miklos Horthy, and its deportation of some 437,000 Jews to Nazi concentration camps under his rabidly anti-Semitic successor, the Arrow Cross regime. In all, some 565,000 of Hungary’s estimated 600,000 Jews were murdered in the Holocaust.

The war memorial has led to an unprecedented rift between the Hungarian government and the nation’s Jews, who say they will boycott this year’s Holocaust memorial events to protest.

At Budapest’s Dohany Street Synagogue, Rabbi Robert Frolich said he received a government grant of more than $90,000 to fix a crumbling cemetery for thousands of Jews who died in the Budapest ghetto during the Holocaust and were buried in the synagogue courtyard. Frolich said he rejected the government aid in protest of the war memorial.

Frolich attributed Fidesz’s increasingly hard-line stance to its competition with Jobbik for right-wing votes. He said the atmosphere had made him cautious enough to stop wearing his yarmulke in public in recent years. He has also gradually beefed up security at the synagogue, which has about 300 members.

“I am convinced that Viktor Orban himself is not racist and not anti-Semitic,” Frolich said. “What he does is pure politics. But it’s a dangerous game.”

Since the 2010 election, Orban’s party has enjoyed a supermajority of two-thirds of the parliament — large enough to enable him to change Hungary’s constitution at will. Thanks to changes he engineered in the country’s election laws, Orban is expected to maintain his supermajority after this recent election, even though Fidesz’s share of the vote fell to 44.5% from 53% in 2010.

In a recent article in the Guardian, Princeton University political scientist Jan-Werner Mueller described Hungary under Orban as a “Russia-leaning rightwing government… that is inching ever closer to [Russian leader Vladimir] Putin’s ideal of governance.”

Like Russia, Hungary under Orban asserts the state’s responsibility for Hungarian minorities in neighboring countries, disquieting Romania and Slovakia, where they constitute a majority in several districts bordering Hungary. Twenty-five percent of Hungarians live outside the country, mostly in these districts, and for the recent election, Orban used his parliamentary supermajority to give these nonresident Hungarians the right to vote. They returned the favor by backing him heavily.

Meanwhile, the party’s 2009 slogan, “Hungary for Hungarians,” made ethnic minorities living in Hungary, including Jews and Roma, uneasy. Orban has made a point of not supporting Western sanctions against Russia for its annexation of Crimea. And his anti-liberal policies on issues such as gay and lesbian rights also echo Russia’s posture more than Western Europe’s.

Despite this, political philosophy professor Andras Lanczi, who directs the Századvég Foundation, a conservative think tank in Budapest, voiced reassurance about the future of Fidesz and the Jewish community.

“Certainly there are moments, like the memorial issue… that cause problems between the government and the Jewish community,” he said. “But I think there is benevolence on both sides. If it works out well, I think there will be not only downs but ups.”

Lanczi noted that Fidesz will not need to include Jobbik in a coalition government because of its two-thirds majority in Parliament.

For all the current uncertainty, Hungarian Jewry is in some ways experiencing a renaissance these days. Just ahead of Passover, the Chabad-Lubavitch director, Rabbi Baruch Oberlander, was putting the final touches on a holiday Seder dinner that was expected to host more than 1,000 people in Budapest — a sign, he said, of flourishing Jewish life in his city.

Eduard Deblinger, president of the Hungarian Jewish Orthodox Autonomous Community, supervises the community’s kosher butcher, the sole outlet in Budapest for chicken, beef and cured paprika salami with a hekhsher. This year the butcher was selling kosher-for-Passover meat for the first time.

There is also broad civic resistance to anti-Semitism by Jobbik. In November 2012, some 10,000 Hungarians from all other political parties, including Fidesz, protested outside the legislature after Jobbik’s deputy parliamentary leader, Márton Gyöngyösi, posted a speech on the party’s website in which he termed conditions now “timely to tally up people of Jewish ancestry who live here, especially in the Hungarian Parliament and the Hungarian government, who, indeed, pose a national security risk to Hungary.”

Istvan Rev, a professor of history and political science at the Central European University, directs the Open Society Archives and its Yellow Star Houses Project, an initiative to remember the 1,600 Budapest apartments where Jews were forced to live for six months during World War II, before their planned deportation from the city. In March, volunteers placed yellow stickers on each of the houses, calling on their residents to learn more about the history of their homes and to commemorate the day when Jews were forced to move into those houses

Jews in Hungary are not the only people worried about the recent election results, Rev said. In his previous term, Rev recalled, Orban painted the E.U. as an oppressor forcing unfair financial terms on Hungary. Prior to this election, he said, Orban garnered support with populist moves like lowering utilities bills, which will pass on a deficit to future generations. As a Hungarian, Rev said, he was embarrassed by the success of Jobbik and Fidesz.

“It is bad to live here for any decent person,” Rev said. “You don’t have to be a Jew. You are ashamed at a government that thinks that being in power means you should force your will on everybody, including those minorities who would like to live in a different way, who would just like to live a decent life.”