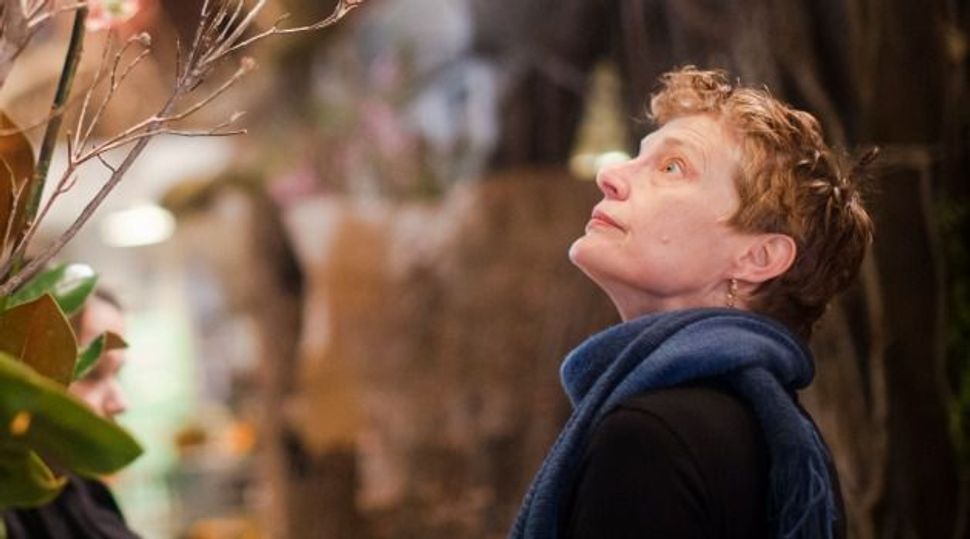 If you’re the kind of person who has a theme for your Passover Seder, and if your theme this year is Marc Chagall, then you might have hired Bella Meyer for your table’s flower display.

That’s because Meyer, the proprietor of Fleurs Bella, in Manhattan’s East Village, is Chagall’s granddaughter.

One weekday afternoon shortly before Passover, a customer, accompanied by her own floral designer, stopped by Meyer’s store with just such a request.

The three sat down at a small, circular table at the back of the store to discuss the concept and colors.

Meyer, 58, long ago came to terms with the attention that accompanies being the granddaughter of one of the 20th century’s greatest artists.

“It took me many years to realize that I had to be myself and turn what I had learned through my grandfather into something which is mine,” Meyer said. “I am very proud to be his granddaughter, because I love him.”

Meyer, who speaks with a soft French accent, was born in Paris and raised in Switzerland. She has a twin sister, Meret Meyer, who lives in Europe.

Bella is named after her mother’s mother, Bella Rosenfeld, who was Chagall’s beloved first wife and muse.

Meyer grew up in a home where her grandfather was the center of attention, not as the mythic Chagall, but simply as a great painter.

“I always knew my grandfather to be extremely insecure,” Meyer said. “Whatever he did always came from his heart, but he always needed to have an affirmation from people to know if they loved his work.”

As a teenager, Meyer was drawn to art history, theology and religious studies.

She moved to New York 35 years ago. “I was completely taken by some imaginary New York with jazz, with popular culture, with contemporary art,” she said.

At first she worked at the Cultural Services of the French Embassy. Later she made theater costumes, masks and puppets.

Finally, 10 years ago, she “went to a flower market and saw the extraordinary beauty and texture and colors of flowers, and I said: ‘Why do I look anywhere else to try to bring this out of what I try to do? Because it’s all there.’”

Rather than “bouquets” or “arrangements,” Meyer refers to her work as “installations.”

Her shop front on East 11th Street is narrow and deep. With its long white walls and wooden pillars and beams, the space feels like a cross between an artist’s studio and a fairy-tale wood.

The floor, walls and ceiling are decorated with clusters of twisting branches, elegant creeping vines, and sprays of budding cherry blossoms and Japanese pussy willows. Shelves, tabletops and stands are dotted with bunches of green and white lilacs, bright-yellow pompoms and ranunculus bursting with violet, white and green.

Toward the center of the store is a 20-foot-long table made of reclaimed wood, where Meyer and her design team have spent most of the day working on an installation for a chairman’s dinner at the Brooklyn Academy of Music.

The BAM dinner precedes a concert by the folk group Carolina Chocolate Drops, whose string- and jug-band music plays loudly as the designers snap off stems and slip beige combo roses, orange and red double tulips, and magnolia leaves, their brown undersides face up, into the arrangements.

“What I decided to do is to imbue myself in that music, in the rhythm, in the landscape of the Carolinas, and to tell a story,” Meyer said. “I see wood, I see the beautiful vegetation that you can see in the South… but I also want it to be rhythmic with lots of movement.”

Despite the attention Meyer pays to her installations she acknowledged that it is the nature of her business that many people overlook flower displays. “If someone thanks you or if they say it made them happy, then it’s really wonderful,” she said.

A few feet away, an arm made of moss reaches its green fingers into the store. That’s something that makes me very sad,” Meyer said.

The arm is part of a 17-foot-long moss sculpture that Meyer created last year for “Art Alive”, an annual floral exhibition at the San Diego Museum of Art. A couple of months before the April event, Meyer flew to Tel Aviv to show the design to her husband, Martin Kace, a 59-year-old Israeli-born entrepreneur.

Kace and Meyer had lived together in Greenwich Village since the mid 1990s.

Meyer has a son and a daughter from a previous marriage, and a stepdaughter with Kace.

Kace, who was paralyzed in 2000 after a tree fell on him in a forestry accident, spent last winter in Israel because it was easier to move around in a wheelchair there than in snowy New York.

At the time Meyer visited her husband, Kace was in a hospital emergency room complaining of health problems. “He died a few hours later” of a massive heart attack, Meyer said. The moss sculpture “was the last thing I showed him, and so for me it really became his spirit in a way.”

The sculpture had to be taken apart after the exhibition. Most of the pieces were destroyed, but Meyer kept a few sections, which are dotted around the store.

“I call her the moss muse,” she said, before returning her focus to the BAM flowers.

Meyer said she prefers to cut stems short. “What I like in flowers is really their heads,” she said, easing apart some of the petals.

Ranunculus and roses are among her favorite flowers. She likes orchids, too, although some scare her: “Some can be quite provocative sexually, so out there.”

She is interrupted by a visitor from Sotheby’s. The auction house will be holding a private dinner in Fleurs Bella in a few weeks for some of its most important clients. The theme of the evening is a celebration of Chagall.

Meyer says she is very grateful that Chagall was her grandfather.

“Not everybody is lucky like that, and I try to honor him, to do my best,” she said. “I try to earn it.”