Who Is To Blame for Pamphlets Ordering Ukraine Jews To ‘Register’? 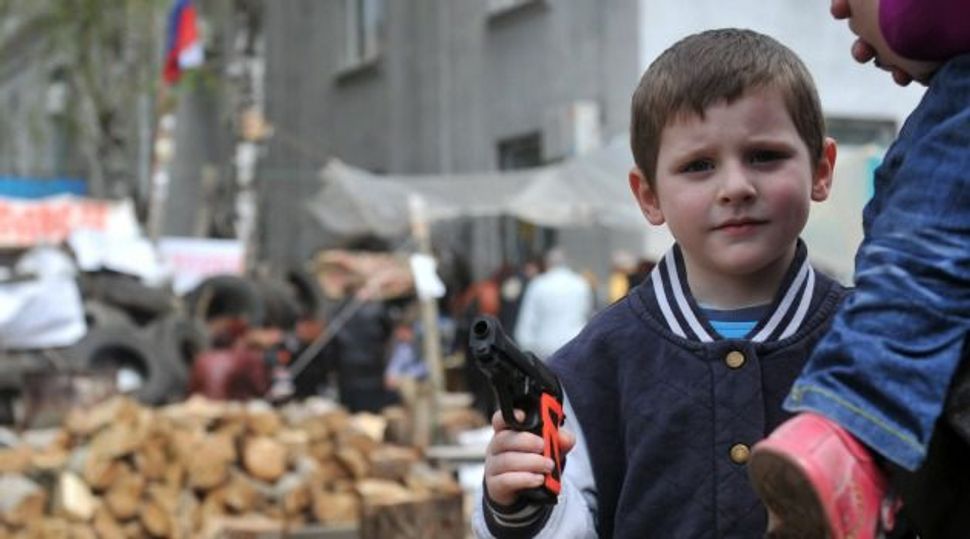 No Playing: A boy holds a toy pistol at a barricade outside the police regional building seized by the separatists in the eastern Ukrainian city of Slavyansk. Image by getty images

For months, Russia has wielded charges of anti-Semitism to undermine and discredit Ukraine’s pro-Western interim government. Now it’s the Kremlin’s turn to feel the heat.

Masked men in Donetsk, which is controlled by pro-Russian separatists, distributed fliers this week ordering Jews over the age of 16 to register with the new authorities (for a $50 fee) or face deportation.

The fliers said registration was necessary because Ukrainian Jewish leaders were supporting the new government in Kiev.

ADL National Director Abraham Foxman issued a statement April 17 saying that while he was skeptical about the fliers’ authenticity, “the instructions clearly recall the Nazi era and have the effect of intimidating the local Jewish community.”

As with anti-Semitic incidents in Ukraine in previous months, observers were quick to caution that the fliers may have been distributed by provocateurs.

That’s not new. Just about every anti-Semitic incident in Ukraine during recent months has been blamed on provocateurs.

The difference this time is that if the fliers were created by provocateurs, they would have been the work of anti-Russian provocateurs rather than the usual pro-Russian suspects.

Something else that’s new: Previous attacks on Jews and Jewish institutions in Ukraine have gone largely unremarked upon outside of the Jewish community. (Unless, of course, you count the Kremlin’s constant harping on about “fascists” and “anti-Semites” in Kiev.)

Today, Secretary of State John Kerry weighed in, denouncing the fliers as “grotesque” and “beyond unacceptable.” He was soon joined by human rights groups and politicians, including Congressman Jerrold Nadler, who said in a statement that the fliers were “a sad reminder of the ongoing importance and blessing of having a strong homeland for the Jewish people in the State of Israel.”

Remember, this is for fliers whose authenticity is still in doubt.

A reporter for the Daily Beast, Anna Nemtsova, visited the synagogue in Donetsk where the fliers were handed out.

A rabbi there, Pinhas Vyshedski, told Nemtsova that the press secretary of the self proclaimed Donetsk People’s Republic, is “the most famous anti-Semite in the region.” Vyshedski said that he would not be surprised if the fliers were genuine.

But when Nemtsova visited the administration building where Jews were told to report for registration she found an empty room.

A security supervisor there said there were no plans “to charge Jews for living in our republic.”

But, he added, he was willing to torture one of the leaders of the separatist movement in Donetsk, Denis Pushilin, to find out who would want to discredit the pro- Russian movement.

The obvious culprits, of course, would be supporters of Ukraine’s interim government, which has suffered a series of setbacks and humiliations this week, including the loss of six armored personnel carriers to pro-Russian forces during a much vaunted crackdown on “terrorists.”

But Time Magazine’s Simon Shuster posits an equally plausible theory that the fliers were an extortion ploy by an opportunistic separatist splinter group.

As Julia Ioffe, of the New Republic, pointed out, it’s also possible that some radical elements among the pro-Russian separatists produced the leaflets.

The truth is that no one knows for sure.

All we do know is that “the Jews of Donetsk and eastern Ukraine may have been asked by a leaflet to register, but it has not been enforced nor are any Ukrainian Jews registering themselves,” Ioffe said. “So far, you can breathe easy. No Holocaust 2.0 just yet.”

Who Is To Blame for Pamphlets Ordering Ukraine Jews To ‘Register’?