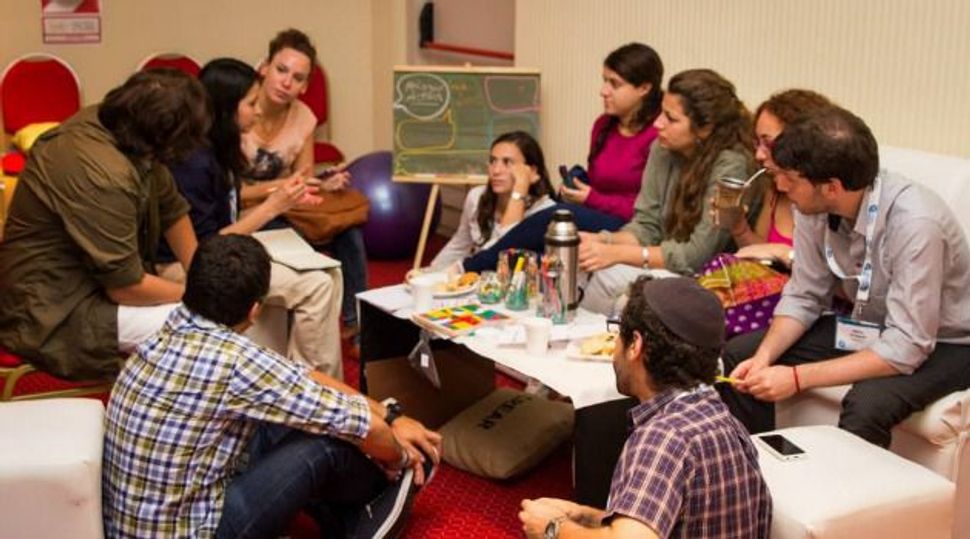 (JTA) — The youthful group of 60 drew their chairs around tables strewn with jars of markers and the occasional Rubik’s Cube, nearby chalkboards at the ready for jotting down big ideas.

The conference hall was suffused with a can-do vibe that wouldn’t have seemed out of place in Silicon Valley. But high-tech was not on the agenda.

Instead, the crowd of social entrepreneurs and activists had come to a resort near the famous Iguazu Falls on the Argentina-Brazil border to brainstorm a future for Jewish life in small communities across Latin America.

“The decline of communities in smaller cities is our biggest problem,” said the event’s co-chair, Ariela Lijavetzky, director of informal education at Maccabi, a Jewish sports club in Buenos Aires. The recent four-day Lazos gathering — Spanish for “ties” — was sponsored by the U.S.-based Schusterman Philanthropic Network as part of its Connection Points initiative.

One of many thematic gatherings of young Jews convened around the world by the initiative, Lazos focused on the challenges faced by shrinking Jewish communities in Latin America.

“It’s at a critical point,” said Carlos Vilches Haquin, a lawyer from the city of Concepcion in Chile. “Information, programs, subsidies don’t get to Concepcion, and a major reason is our isolation.”

The trend toward centralization is pronounced in Argentina, where about 90 percent of the country’s Jewish population lives in the capital of Buenos Aires.

In the Argentine city of General Roca, located in Patagonia, the Jewish community once numbered about 400 families. These days, an egalitarian minyan still convenes for Friday night services at a synagogue in the center of town. But the few active community members, which hovers around 25, illustrates how times have changed.

“Our principal income is from the cemetery,” said Pablo Indelman, the synagogue president, community director and Hebrew teacher.

Jewish population movements parallel larger trends in Latin America, where people are flocking to the main urban areas of their countries. Young Jews often do not return to their hometowns after studying or working in the big city. Others leave for Israel or destinations abroad.

“There’s almost no youth, they’re all grandparents,” said Moshe Sefchovich, a resident of Guadalajara, a city of more than 1 million in the Mexican state of Jalisco. He describes a mass movement of community members to Mexico City.

While aware of the difficulty of reversing migration trends, Lazos participants were determined to find ways to reinvigorate Jewish life. Participants proposed ventures such as the establishment of a new synagogue in the Argentine city of Corrientes and a network for Jewish travelers journeying to Brazil during the World Cup. Technology was offered up as a means of changing the status quo.

“Everyone is asking where young adults have disappeared to,” said Victor Rottenstein, the head of search engine optimization operations at Mercado Libre, the Latin American version of eBay. “I’ll tell you where they are. They’re on Facebook.”

Participants discussed how to capitalize on the potential contributions of community members who had left and to improve the way resources are shared among communities.

“Communities are widely distributed across a broad area,” said Diego Goldman, a psychologist from Buenos Aires who co-chaired the Lazos event with Lijavetzky. “There is a big necessity for Latin America to work as a network.”

The effort to strengthen small communities is complicated in some countries, however, by economic uncertainty. In Argentina, an inflation rate of approximately 30 percent and the prospect of further currency devaluations make it more difficult for institutions to stay afloat, with synagogues in a number of smaller cities selling off their properties and merging.

Even communities with storied histories are struggling.

Moises Ville, a town in the Argentine province of Sante Fe, famed for its Jewish gauchos, or cowboys, once was a shining symbol of Jewish community life on the plains of Argentina. With the financial patronage of the German-Jewish philanthropist Baron Maurice de Hirsch, Jews fleeing czarist Russia and Central Europe had taken advantage of Argentina’s open-door immigration policy and established the colony in 1889.

The city is still called the Argentine Jerusalem for its history and culture, and it is currently celebrating its 125th anniversary. Today, however, only about 250 of its 2,000 inhabitants are Jews.

“One of our main concerns is the lack of young people,” lamented Claudia Baer, secretary of the community synagogue, before adding that she, too, would like to go to Israel, if it weren’t for her job.