Yuli Kosharovsky, Soviet Jewry’s ‘Man Behind the Scenes,’ Dies at 72 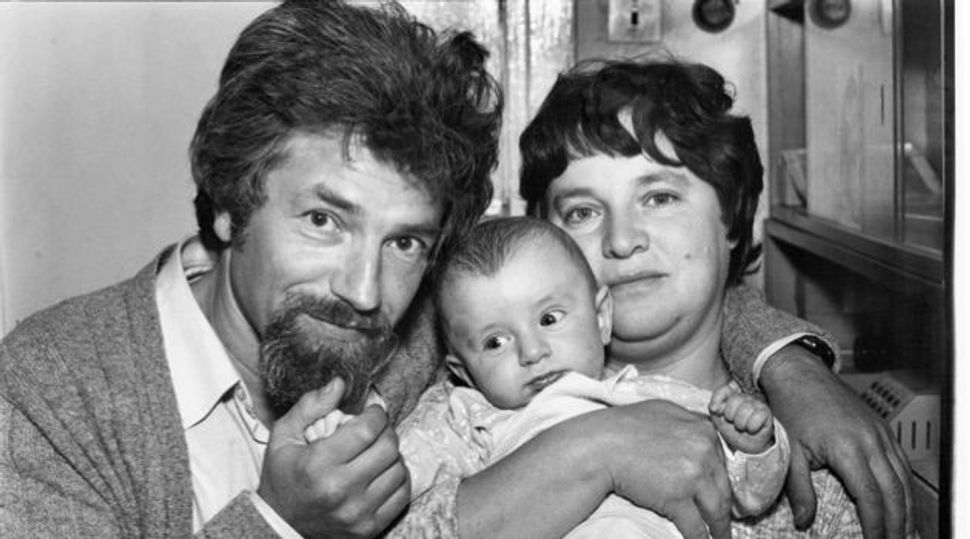 Fighter: Kosharovsky with his wife and baby in 1981. Image by Bill Aron

On Tuesday, the first day of Pesach, the Jewish world lost a true hero. Yuli Kosharovsky was best known for his work as an active leader of the Jewish refusenik movement. For years he fought for the freedom of Soviet Jews, and worked to enhance the lives of refuseniks, making a major contribution to Jewish education in the Soviet Union.

Yuli fell from atop a palm tree that he had climbed and was in the process of trimming in Beit Aryeh, the West Bank settlement where he lived. He died on the way to the hospital. He was 72.

All of us, his friends and family, are devastated and shocked by his passing, by the realization that this vibrant man, a force of nature, is no longer with us. Nobody, however, is surprised that he had been climbing a palm tree. To Kosharovsky, a born adventurer and fitness enthusiast with an ever-optimistic outlook, everything was possible.

I first met Yuli when conducting interviews with former refuseniks and activists for a documentary film. He had a mischievous twinkle in his eyes, a sharp wit, and a keen sense of humor. He was small in stature, and remarkably fit. An avid runner who also practiced Tai Chi, he joked that food scarcity when his mother was pregnant with him resulted in him being the smallest brother. “That’s why I had to work so hard to become much stronger than them.”

One of my first questions was about what his profession had been and why he had been refused an exit visa in the Soviet Union. With a completely deadpan expression, he answered, “ I was the chief engineer for the systems control of an intercontinental ballistic missile… like the kind that can take out New York.” Tongue in cheek, but he wasn’t joking. He was captivating.

Yuli Kosharovksy was born to an assimilated Jewish family in Sverdlovsk, a city in the Ural region of central Russia, which the Soviets deemed “closed” due to the secret nature of its military industry. For the first twenty years of his life, Kosharovksy was a Soviet patriot studying engineering and automation — his Jewish identity held little import for him. By 1964, he had become an expert in electronic systems of planes and missiles, working twenty-hour days in the Sverdlovsk Institute of Automation designing systems control of strategic missiles – a program which competed with the American Polaris system. It was an important, highly paid position.

It was the Six Day War in 1967 that changed Yuli’s perspective and his life. Anti-Israel and anti-Semitic propaganda filled the streets and airwaves of the Soviet Union. For the first time he felt at odds with the Soviet state. “I felt a physical pain in my heart,” he said. “All of a sudden I realized that I’m living and working in a country which is a clear enemy of my people. It was not a question of giving up job or salary. It was a question of I couldn’t live in this condition.” He left the job.

He described his decision to link his fate to the Jewish people as a mystical experience, as if the noise in his life suddenly disappeared and left a peaceful sense of calm and quiet.

In 1971, Yuli became the first Jewish activist In Sverdlovsk to apply for an exit visa to Israel. He was publicly condemned by his co-workers, and denounced as an agent of Zionism and world imperialism. He was slandered in the local press and publicly defamed as a “traitor.” Only seven days later, he was arrested on spurious charges of hooliganism and detained for one month in a special punishment cell.

Yuli was aware that it would take several years for his security clearance to expire so he would be allowed to leave. He moved to Moscow where he joined the growing refusenik community.

In 1973, Yuli initiated a seminar program for unemployed refusenik engineers – all out of work in their professions because of their refusenik status. Despite repeated threats and warnings by the KGB to discontinue the seminars, Yuli persisted in conducting them.

In Moscow, Yuli devoted himself to teaching Hebrew, becoming a prominent Hebrew teacher. His love of the language became legendary. “Hebrew became the essence of my life ever since my professional life was disrupted,” he said. Teaching Hebrew at that time was considered a “crime,” and Yuli risked imprisonment and labor camp sentences. For Yuli, Hebrew was the thread that bound him to his past and would connect him to his future in Israel. His passion for Hebrew teaching led him to create (along with a group of other influential Hebrew teachers) an underground Hebrew teaching network that covered the entire Soviet Union. The unusual locations of the seminars included climbing trips in the Caucus Mountains. “We were going up above 2,000 meters above sea level,” he explained, “and usually the KGB didn’t go higher than that.”

Yuli Edelstein, currently the speaker of the Israeli Knesset, had worked extensively with Kosharovsky in their Hebrew teaching days in Moscow and described him as an informal leader who inspired countless young Russian Jews to become Hebrew teaching activists. “It wasn’t like anyone had given him this authority,” he explained. “But when he told me to go to Minsk to teach Hebrew, I went.” Knowing Kosharovksy’s exuberance and charisma, it’s not hard to imagine. “It was only later that we understood that he was also well coordinated with Israel.”

Yuli became one of the main spokesmen for the Jewish activists in the Soviet Union and a central contact for the secret Israeli office helping to coordinate the movement. He was one of the designated representatives of the Jewish emigration movement to meet with prime ministers, congressmen, parlimentarians, Western correspondents and countless other dignitaries from the West. He represented all refuseniks when he delivered an address to President Ronald Reagan at the American embassy in Moscow, voicing their appeal for freedom.

His long harsh years in Moscow included harassment by local authorities, house arrests, and interrogations. In 1988, his seventeenth year of refusal, he and his wife Inna declared a hunger strike. “We simply want to draw attention of all those who value human rights not in words but in deeds to the tragedy of our family and that of countless other victims of unlimited refusal for reasons of state security,” Yuli announced in a statement. “We have been through endless run-arounds in a vicious circle deliberately set up by the authorities to trap refuseniks. We have wasted seventeen years of our lives in a fruitless struggle with a heartless bureaucratic machine.”

On March 11, 1989, 18 years after Yuli first applied for an exit visa to Israel, he and his family finally left the Soviet Union. Yuli’s long-cherished dream to live in Israel had at last become a reality.

Edelstein, who gave a eulogy at the funeral on Wednesday, described Kosharovsky as “the man behind the scenes, organizing the Hebrew teaching, the culture, and even the structure (though we dared not call it that) of our activities in Moscow. Its quite possible that without him, none of these things would have happened.”

He recounted being interviewed on an Israeli radio station after receiving word that Kosharovksy would finally be permitted to leave the Soviet Union. “The interviewer said, ‘If he was so important, how come we’ve never heard of him?’”

“You know, it’s like a soccer game,” replied Edelstein. “There are the big stars who score all the goals. And then there is the playmaker. For those who understand the game, they know that without the playmaker, there’s no game. Yuli was like the playmaker – the guy behind the scenes making it all happen.”

In Israel, Yuli’s activity only increased. First he found work at Israel’s first cable company and ended up as the manager of its television broadcasting station. Then he turned his attention to the fate of Jews remaining in the former Soviet Union, joining the Jewish Agency for Israel as a senior consultant. He continued to work both in hi-tech and advocacy and education, and was the founder of DA, a small Israeli political party, officially called The Movement for Democracy and Aliyah.

When I met him ten years ago, Yuli was just starting on what would become one of his most important projects, and a major contribution to Jewish history. Over the years, he wrote a four-volume history of the Soviet Jewry movement, “We Are Jews Again: Reflections on the History of the Zionist Movement in the Soviet Union.” For this major undertaking, Yuli interviewed hundreds of former refuseniks and Western activists. He conducted extensive research and documentation with the help of Enid Wurtman, a former activist who herself spent decades working for the refuseniks’ behalf.

Yuli and Enid’s research dovetailed with my own, and we collaborated and shared interview transcripts, stories, and a passion for documenting this important history.

Over time I became accustomed to his very strong hugs and kisses and the general exuberance with which he seemed to approach every project and problem.

Yuli’s books are the only comprehensive history from a refusenik’s perspective on the Soviet Jewry movement. Yasha Kedmi, an early activist and former head of the Israeli Liaison Bureau, praised the books for their meticulousness and precision, and commented, “Yuli Kosharovsky’s books are unique as they present first hand eyewitness accounts of the activists, and the Prisoners of Zion who were courageously involved in the struggle for aliya from the Soviet Union.”

“Everyone — all of us — complain that this history is being lost,” commented Edelstein. “And he was the only one who was actually doing something about it. Not just talking but doing.”

Yuli’s last project was an archival website, kosharovksy.com, where he had begun to archive and document the movement, again with the help of Wurtman. In 20 months, 30,000 visitors from all over the world visited the site. Last month alone, it garnered over 5,000 hits.

And this was Yuli’s final passion — making sure that this important piece of Jewish history will be remembered and cherished. It’s now up to us to continue his legacy. I feel privileged for the hours I spent in the company of this great man, and to have been able to call him a friend.

Uriel Epshtein, a son of Russian dissidents, wrote in his Facebook status: “It is ironic (though perhaps fitting) that on a holiday that celebrates freedom, Yuli Kosharovsky, one of freedom’s greatest defenders, passed away.”

He will be truly missed.

Laura Bialis is a filmmaker who directed and produced the 2008 film, “Refusenik.”

Enid Wurtman contributed to this article.

Yuli Kosharovsky, Soviet Jewry’s ‘Man Behind the Scenes,’ Dies at 72