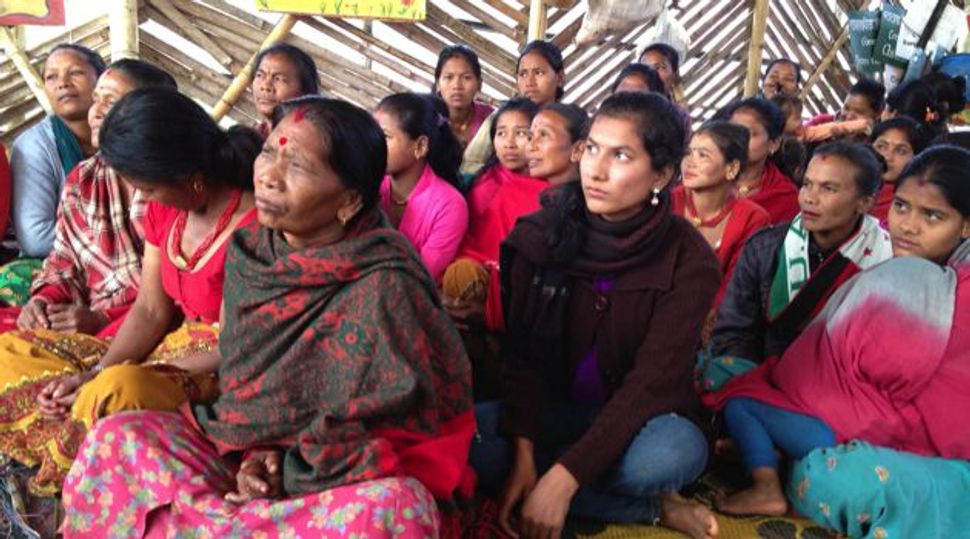 Encounter: Women in Mahadev Besi meet with the Tevel b’Tzedek board. Image by Stuart Schoffman

In the hillside farming village of Mahadev Besi, west of Kathmandu, half a dozen middle-aged Jews from Jerusalem sit cross-legged on the floor of a bamboo shed, listening to the local women. Most of us are members of the board of Tevel b’Tzedek, an Israeli organization that sends young volunteers to combat poverty in Nepal.

The women of the village are young and old, wrapped in colorful saris and shawls. That’s the first thing you notice in Nepal, the colors. Here is one of the most beautiful countries in the world — the snowy Himalayan vistas, the dramatic green valleys, the faces of the people — but also one of the very poorest.

The buses and trucks belching fumes on the garbage-strewn streets of the capital are decorated bright orange, blue, yellow and red, as if to offer an optical antidote to the dim economic horizons. In villages like this one, men are conspicuously absent. Some spend long periods away from home as construction workers, building skyscrapers in Abu Dhabi.

Thousands of young Israelis, on their extended post-army ramble, spend a month or three in Nepal, trekking, marveling at Hindu and Buddhist temples, happily draining four cups at the biggest Passover Seder on planet Earth, courtesy of Chabad. That’s the stereotype of the Israeli backpacker, and it’s okay, as far as it goes. They’ve been wholly owned by the Israel Defence Forces for at least two years, and now it’s time to relieve the pressure. But what happens next?

Seven years ago, an adventurous Israeli innovator named Micha Odenheimer founded Tevel b’Tzedek, which means “the earth, in justice.” His idea was simply this: Create a situation where young Israelis go to destinations like Nepal to understand global poverty, and make a small but meaningful contribution toward improving the lives of the world’s poorest people. Odenheimer majored in English at Yale University and was ordained as an Orthodox rabbi by Shlomo Carlebach. After making aliyah in 1987, he traveled often to Ethiopia and set up the Israel Association for Ethiopian Jews. As a roving freelance journalist, he was drawn to other developing countries — Laos, Somalia, Haiti, Bangladesh, Iraq.

The Tevel volunteers are mostly in their 20s and they comprise secular and religious Israelis who have completed their army service, as well as college graduates from the United States. Most come to Nepal for four months. In the beginning, the volunteers focused on the slums of Kathmandu, doing what they could to keep Nepali kids away from drugs and prostitution. Later on the emphasis shifted to rural poverty. “We want to make life there sustainable,” Odenheimer told me, “so people will be able to support themselves and not be compelled to move to the slums of the big city.”

Before Tevel became involved, the villagers of Mahadev Besi made a meager living by pounding rocks into gravel used for paving roads. Their land was fertile, but poorly utilized. Sanitary facilities didn’t exist, not even squat toilets. Now, as Tevel completes its four-year intervention, Israeli-made drip irrigation nourishes the tidy fields of a model farm, designed for emulation by other villages.

Crops are grown in rotation throughout the village, and a surplus is sold at market. Methane gas derived from human and animal waste provides cooking fuel.

Bishnu Chapagain, a Nepali agronomist who studied and worked in Israel for more than a decade, earning his doctorate from Ben-Gurion University, oversees Tevel’s agricultural activities. Chapagain also directs Tevel’s Nepali staff of 30 salaried employees, augmented by Nepali volunteers who provide an essential bridge to the local population.

After our visit to Mahadev Besi, we made a three-day trip to the mountainous region of Ramechhap, in central Nepal. Access was difficult (fording a river by bus, bouncing by jeep on cliffhanger dirt roads) and accommodations were spartan (limited electricity, no heat or plumbing). We visited four villages and met 30 or so Jewish volunteers living on site. We watched them work with Nepali children, helping to reduce truancy by cleverly creating extra-curricular programs for the kids before school hours.

In the sense that rescuing a single village is analogous to the rabbinic adage about saving a single life, Tevel b’Tzedek is making a world of difference in Nepal. At the same time, Nepal has changed the volunteers, too. A central pillar of Tevel’s agenda is Jewish learning: Odenheimer and guest educators from abroad teach the volunteers in classes based on secular writings as well as on traditional texts — biblical, talmudic, hasidic — that embody Jewish values of social justice.

Over a Sabbath cholent lunch — vegetarian, prepared by the volunteers — at Tevel’s headquarters in Kathmandu, Odenheimer taught a shiur, a lesson that swung from Deuteronomy to the 16th-century Maharal of Prague, the talmudist and mystic who fashioned the fabled Golem. Judaism holds that all people are created b’tzelem elohim, in the image of God. What does this mean? The image of God, the Maharal wrote, “is a supernal light that shines on human beings, and this light is the light of the world to come.” “I’m not so much into the world to come,” one young woman said, “but I know what you mean.” What Odenheimer meant, of course — indeed what Tevel b’Tzedek is all about — is that Nepalis, so foreign to Jews in so many ways, are bound to us by a shared humanity.

It is famously written in the Talmud (Bava Metzia 71a): “The poor of your city and the poor of another city, your poor come first.” There are many poor people in Israel, and the question often arises: Why devote energy and resources to the poor of Nepal? Certainly, doing good works in Nepal — and in Haiti, where Tevel was active in earthquake relief, and in Burundi, where Tevel will launch a project this year — makes for good public relations for Israel at a time when it needs it badly. But the benefit to Israel is much deeper than that, a truth that came to me as I sat in Mahadev Besi, listening to the women.

One by one, in their rainbow of saris, they stood up to speak. Their voices were strong, impassioned, their cadences quick, rhythmic and poetic. I didn’t understand a word, and the simultaneous translation into English by a member of the Nepali staff was difficult to follow. But their faces told the story. These women had overcome inhibitions and passivity and now felt empowered to speak out about their needs and hopes for the future.

The Tevel volunteers, by fostering self-confidence and building community leadership, have empowered themselves as well. When they return home, they will apply their personal transformation, each in his or her own way, to the creation of a better and more just society.

Stuart Schoffman is a fellow of the Shalom Hartman Institute. His translations from Hebrew include books by A.B. Yehoshua, David Grossman and Meir Shalev.