My Race Through Walls in Palestine Marathon 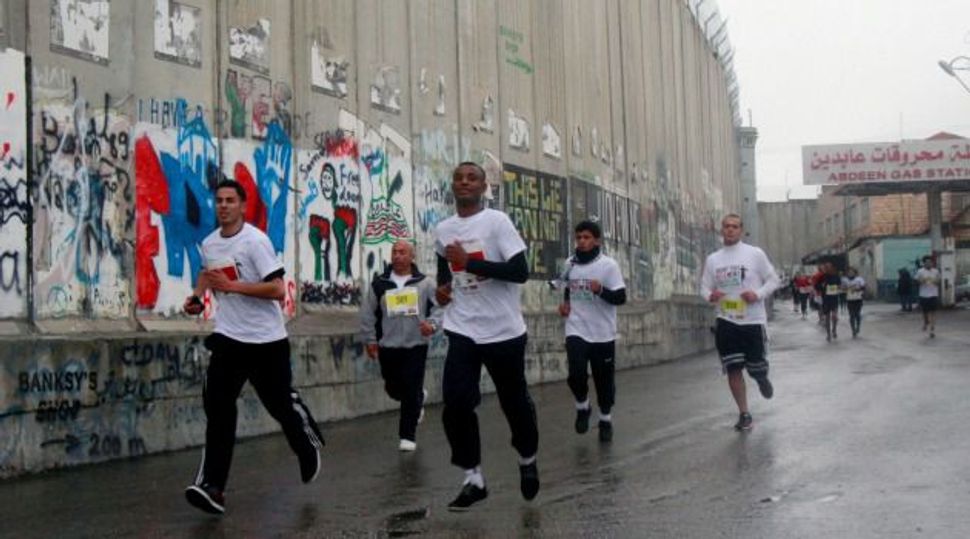 Race Day: As many as 3,200 runners took part in the second annual Palestine Marathon in Bethlehem on April 11. Image by Phillip Smith

“Getting out of Jerusalem isn’t tough,” said Tiviet Nguyen, the Vietnamese Israeli who sat behind me on the crowded bus full of Palestinian men. “The challenge is getting back in. But there’s a whole industry of taxis taking Israelis back from the West Bank. We’ll be fine.”

Like me, Nguyen and her husband, Moshe Saraf, were headed to Bethlehem to participate in the second annual Palestine Marathon. Unlike me — I’m a Canadian tourist — they are Israelis, and it’s illegal for them to be there without a permit. But since Nguyen is involved with an organization that links Israelis and Palestinians, she’s familiar with the trip home.

I, on the other hand, was a little nervous about our destination. This was my first time in the West Bank. I’d been to Israel before, but this would be the first time I’d be seeing the separation barrier. Safety was also on my mind. I swallowed my fear, and asked Nguyen about her thoughts on peace.

“Peace begins on a ground level,” she said.

“You know,” Nguyen said, “just being here is a political declaration.”

I had made the trip so that I could witness and report what I saw. But as a Jewish journalist, the task was a little loaded. I was there to understand those on the other side of the wall.

My journey started three weeks earlier, when I joined a press trip to run the half at the Jerusalem Marathon. We toured the country and ate incredible food. Then we strapped on our sneakers and ran the hilly course, which passed Israeli highlights like the Knesset, the Zion Gate and Mount Scopus. More than 25,000 runners from 54 nations participated. Many of them raised funds for projects and charities. During my 13-miles race, I met runners from many different backgrounds, including a settler, Christians and Orthodox Jewish women. But I didn’t meet any Palestinian or Palestinian-Israeli runners. I felt like I was missing part of the region’s running story. So here I was, set to run the same distance. This time, I’d be the minority in unfamiliar territory.

The first Palestine Marathon launched last year, weeks after the United Nations Relief and Works Agency canceled the Gaza Marathon when Hamas banned women from running. In 2013, 650 runners participated. By the time I collected my registration package in April, 3,200 runners were expected.

Days before the race, news agencies reported on the Gaza-based Olympian who was barred from participating. The Olympian was among a group of runners denied travel permits out of the Hamas-ruled territory by Israel. Israel considers Hamas a terrorist organization because of the hundreds of Israelis killed by its attacks. As a result, most of the population cannot travel beyond Gaza’s borders. 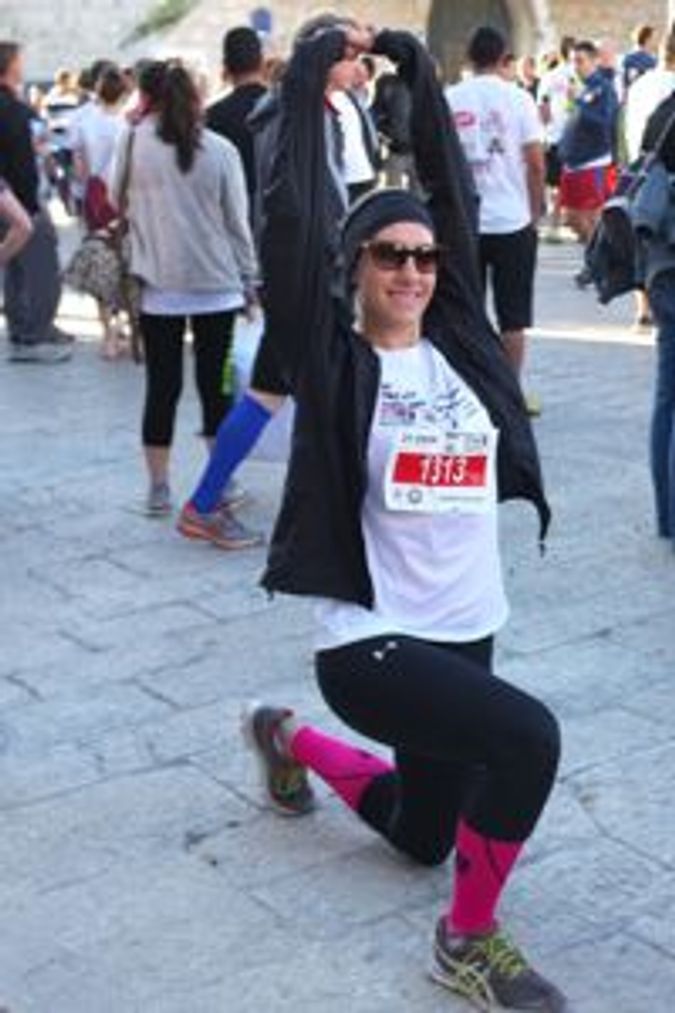 She Runs: The author warms up in Bethlehem before the race. Image by Phillip Smith

It’s restrictions like those that led a Danish aid worker to come up with the marathon idea. “The idea came to me one day, as I was waiting in a checkpoint. Palestinians’ inability to move was what struck me the most,” said marathon co-founder Signe Fischer, who works for the Danish foreign ministry. She also co-founded the Right to Movement organization.

Fischer teamed up with Palestinian organizations and municipalities and created the first marathon with a focus on free movement for all people.

In an ironic turn of events last year, Fischer had to ask two Israelis to withdraw the night before the race. She and her co-organizers cited the Jewish runners’ safety as a concern. Israelis are not legally allowed in Palestinian-controlled areas without a special permit. Tears were shed as Fischer said, “It hurts to call someone and say you can’t run…. Now I know what it feels like to be an anti-Semite.”

A documentary film crew caught this scene and others leading up to last year’s race. I watched the film the night before the race, in Bethlehem’s Manger Square, in the shadow of the Church of the Nativity and the city’s only mosque. When the movie finished, runners scattered in the cool air to find warm beds. We were due back in the square — the race’s start and finish point — in a few hours. I needed to find Fadi Asiwat.

Asiwat was a 24-year old swimming coach and my home stay host. We met on a Facebook page for runners in East Jerusalem. When I posted to the page, asking about good places to stay, he offered a room. He was also running the half marathon the next morning.

As we drove to his home, Asiwat told me that before the wall, the drive to Bethlehem was less than 10 minutes. Twenty-five minutes into our ride, we crossed to East Jerusalem from the West Bank with a nod from the checkpoint guards. Asiwat said my fair skin and blue eyes probably helped us avoid a time-consuming check.

As we descended into the Jabal Al-Mukaber valley, Asiwat pointed out Jewish settlements and Arab villages facing each other on different sides of the hill. I asked if he had any Jewish friends. “I work with Jewish people at the pool where I lifeguard. I say hello to people on the street. We’re decent to each other,” he said. When I asked him if he’d mind if Israelis ran in the race, he was hesitant. “Yes, it’s about sports,” he said. “But every Palestinian has hurt in their heart. It would be hard.”

In my room, a fruit basket and a bowl of nuts awaited.

“Arab hospitality. You are always welcome,” Asiwat said, And with that, he wished me a good night.

The next morning, Manger Square was bursting with energy. Top 40 hits played loudly, as Danish girls in tank tops warmed up alongside women in hijabs. Young Palestinian men danced in a circle, shaking their shoulders in unison. Runners smoked cigarettes while stretching.

“Why are you here?” I asked the runners around me.

“It’s empowering to see so many women here,” said Niralee Shah, 24, an Indian woman who works at a technology company in Ramallah. “It’s really exciting.”

“The world sees us as terrorists, but we love peace, nature, animals,” said Musa Abo Sbaeh, 37, a social worker. “It’s also about freedom. I’ve never been to the sea. I don’t leave my house after 10 p.m. — I’m too scared of the Israeli police. So today I run for freedom.”

Soon all the runners were ushered to the starting area. A horn blasted. We took off. My motto for running the Jerusalem half marathon was “Inch by inch, it’s a cinch.” Applying the motto once again, I slipped into a gentle stride.

The route first ran through the Aida refugee camp, which was established around 1950 by Palestinians from the Jerusalem and Hebron areas. Today, Aida is home to more than 4,700 people. UNRWA reports that it is severely overcrowded.

It is here that I first came face to face with the wall. Israelis call it the “security fence” and say it has resulted in fewer suicide bomb attacks. Palestinians call it the “apartheid wall” because of the impact it has had on their day-to-day lives. Regardless of its name, it’s imposing. With 26 feet of gray concrete, its purpose is unequivocal: to keep people contained and controlled. As I rounded a corner, an even taller tower loomed. At its top, small dark openings were visible. They were just the right size for the tip of an automatic weapon to follow, aim and fire. Immediately I was hit with sadness. I understand the Israeli desire for freedom from attacks, but I also was beginning to understand what it’s like to live under the physical threat of violence — and restriction — every day. It fosters a climate of distrust.

Graffiti transformed the lower part of the wall into a spray paint script: “More bridges, fewer walls”; “Make hummus not walls” and, “In my previous life, I was the Berlin Wall. The beer was better there.” The wall’s humor and wit dulled my sadness. I ran on.

After a loop through the Aida camp, we took a long stretch along Hebron Road. Young boys trailed me on their bicycles, yelling, “Yalla! Yalla!” I ran past a donkey munching on hay, men drinking tea, and fields of olive and fig trees. Groups of children extended their arms for high-fives. In the South, we passed another refugee camp. Dheisheh was initially built as a temporary shelter during the 1948 war. Today, multiple generations know it as their only home.

The six mile mark was in al-Khader, where the wall divides portions of farmland. Farmers were left unable to access parts of their land without a permit. Protests are ongoing. During the run, Palestinian boy scouts handed out orange slices. I rounded the turning point and headed to the finish line. Once I crossed, I collected my olive wood medal and stood shoulder to shoulder with hundreds of other runners.

“The race shouldn’t be political, it should be more about healthy bodies,” said Frank D’hondt, a Belgian who works for UN-Habitat, an urban planning agency. “With all the eating and smoking, poor health is becoming a problem here. Occupation affects your ability to reach your potential.”

I reflected on the race, stretching while inhaling the cigarette smoke. After watching some more celebratory dances, I headed home.

On the way back to Israeli territory, I followed Palestinian men and women weaving through metal detectors and turnstiles at the more extensive checkpoint. After a brief interview with an Israeli guard, I was on the bus back to Jerusalem.

Soon I’d be having Passover dinner with my cousins in Jerusalem. These are relatives who served in the Israel Defense Forces, who build houses with safe rooms. In a few days, we would be gathering around the table to tell the story of enslavement and freedom. Freedom would be on my mind. So would walls — for what they protect and what they conceal. It’s about my family on one side, and the people I met on the other. And my freedom to see it all with the worn-out soles of my sneakers.

Tania Haas is a freelance journalist travelling the world and reporting on what she sees (and eats). Her work has been featured in Bloomberg News, CTV News Channel, The New York Times and USA Today. Visit http://taniahaas.com for more.

My Race Through Walls in Palestine Marathon