J Street Backed By Major Groups, But Will It Get Into Presidents Conference? 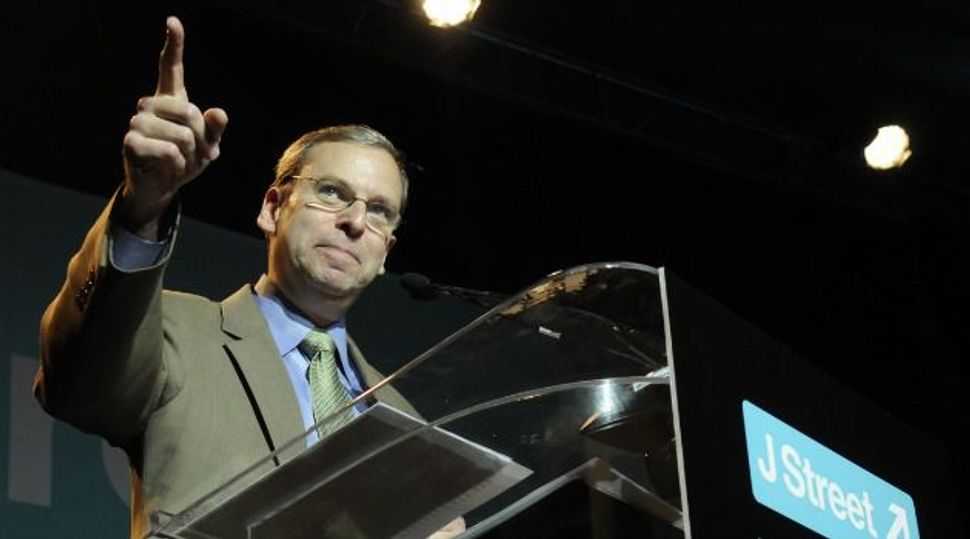 Point the Way In: Jeremy Ben-Ami heads up the dovish Israel lobby J Street, which is seeking admission to the Presidents Conference this month. Image by JTA

Several large, mainstream Jewish groups, including the Anti-Defamation League and the Conservative movement’s Rabbinical Assembly, have to decided to vote in favor of admitting the dovish Israel lobby J Street into organized Jewry’s primary umbrella group on Israel. Others, like the Jewish Federations of North America, are leaning towards voting that way, according to informed sources.

The Conference of Presidents of Major American Jewish Organizations, which is scheduled to vote Wednesday on J Street’s request for admission, is conducting its process under a shroud of secrecy. The decision will be made in a closed-envelope ballot, and most of the member organizations remained tight-lipped regarding their expected vote.

“The ADL will vote for the inclusion of J Street in the Conference of Presidents,” Abe Foxman, National Director of the Anti-Defamation League, confirmed on Monday. “It’s not because we agree with everything J Street says, but because we think they are part of community.” He added that J Street’s views are accepted by many in Israel and there is no reason they should not be part of the discussion in the U.S.

The Conservative movement’s rabbinical arm, the Rabbinical Assembly, also decided to vote in favor of J Street’s admission to the Conference of Presidents. The RA’s executive vice president Rabbi Julie Schonfeld confirmed the group’s decision in an email to the Forward. The Hebrew Immigrant Aid Society, another significant group, told the Forward it backs J Street’s admission.

“The ‘M’ in the Conference’s name stands for ‘Major,’ not ‘Monotonous’ or ‘Monolithic,’” said Mark Hetfield, the group’s president and CEO. “J Street is a major American Jewish organization, and they should not be excluded just because they have a different perspective than some other members on the best strategy for supporting a strong and democratic Israel.”

Sources involved in behind-the-scenes talk said that JFNA is leaning toward supporting J Street’s admission. JFNA would not comment about the topic when contacted by the Forward. Nor would many other groups the Forward called, pointing to a Presidents Conference policy of avoiding a public vote on the issue.

As decision day nears, lobbying on the issue appeared to be on the rise. Despite a setback earlier this month when J Street failed to win the endorsement of the Presidents Conference’s membership committee, the group and its supporters have been working intensely to convince member organizations to support it.

Several major groups have already announced their support for J Street’s membership bid. The Jewish Council for Public Affairs, an umbrella organization representing hundreds of local Jewish Community Relations Councils, announced it would back the lobby’s request. “They fit in the picture of a big tent, which is the kind of community we believe in strongly,” JCPA’s president rabbi Steve Gutow told JTA.

Another major organization backing J Street is the Union for Reform Judaism, which represents the largest Jewish denomination in America. Mark Pelavin, URJ’s senior adviser to the president, told the Forward the organization has been holding talks with other member groups in an attempt to convince them to vote for admitting J Street to the Conference.

“It is an important referendum, not so much on J Street, but on the Conference of Presidents,” Pelavin said. The results of the vote, Pelavin argued, will indicate whether the Conference represents the Jewish community. “Groups will have to decide whether our tent is big enough to stretch not only to the right but also to the left,” he said.

Two other Reform organizations that are members of the umbrella organizations, the Women of Reform Judaism and ARZA, the Reform Zionist movement, are also in on J Street’s side. “ARZA believes in the inclusion of J Street and all other major Jewish organizations at the table of the Conference of Presidents of Major Jewish Organizations,” said the group’s president Rabbi Joshua Weinberg.

But the Reform movement’s rabbinical organization has yet to decide. The board of the Central Conference of American Rabbis will meet before the vote to decide on the group’s policy. “Some of our members are J Street supporters and some of them are not,” said strategic communications director Rabbi Hara Person. Several sources informed on CCAR’s internal discussions told the Forward that the group’s president, Rabbi Richard Block, has been leading the opposition to J Street’s inclusion while other board members support the move.

Americans for Peace Now, which is already a member, unsurprisingly supports the admission of J Street, which shares its mission of promoting U.S. involvement to push both Israel and the Palestinians towards a two-state solution to their conflict.

J Street enjoys the support of several smaller organizations that share much of its ideology. These groups include Ameinu, the Jewish Labor Committee, the Workmen’s Circle and the National Council of Jewish Women.

But even having some of the Jewish community’s largest and most influential groups on their side may not be enough for J Street to win approval. The Conference of Presidents is made up of 50 organizations, many of them small and some with very little activity. Still, each group gets an equal vote regardless of its size.

The voting process is not only secret, but also complicated. The Conference of Presidents’ bylaws require a quorum of 75% of member organizations attending the meeting. Of them, a majority of two thirds is required in order to approve a membership request. If such a quorum is not reached, the vote will take place by mail within ten days.

J Street Backed By Major Groups, But Will It Get Into Presidents Conference?