Who Is Donald Sterling and How Did He Become Synonymous With Bigotry? 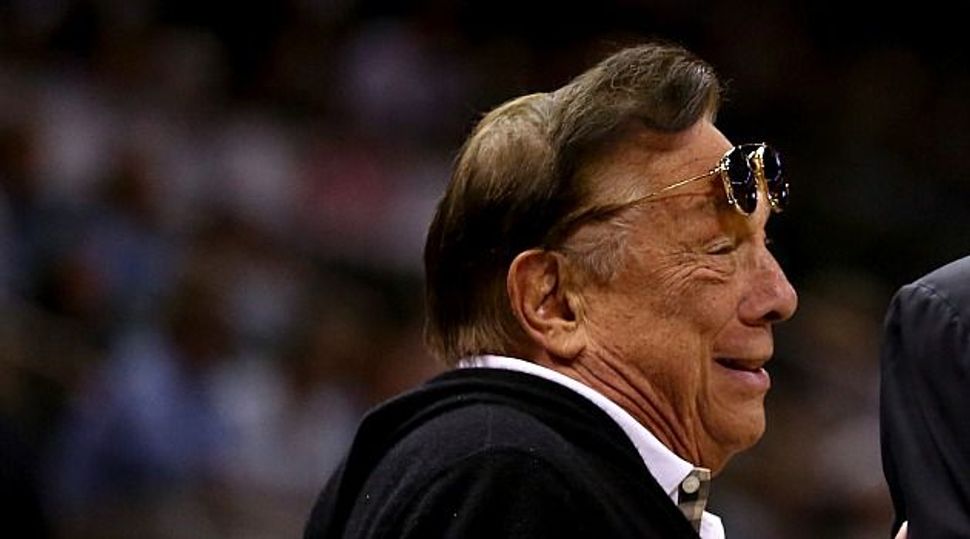 The owner of the Los Angeles Clippers basketball team may be well on the way to making his name, “Donald Sterling,” virtually synonymous in the public’s mind with bigotry.

But that is not the name he was actually born with.

Donald Tokowitz was born to Jewish immigrants in Chicago who had, in fact, fled Eastern Europe to get away from the kind of attitudes their son — if it is confirmed that it is him — was caught on tape adamantly defending as part of a “culture.”

Arriving in L.A. with his parents as a child, the future Donald Sterling was raised in East L.A.’s then-predominantly Jewish neighborhood of Boyle Heights, the only son of a produce peddler.

In an interview, he once claimed that his father changed the family name when he was young. But friends say that he changed it to Sterling himself in the early 1960s.

“I asked him why,” a coworker told Los Angeles magazine in 1999. “He said, ‘You have to name yourself after something that’s really good, that people have confidence in. People want to know that you’re the best.’”

Today, Sterling’s relationship with the Jewish community cannot be described as a close one. But it exists. Or, at least, it has existed; Since the release over the weekend of a tape that purports to catch the 80-year-old Sterling and his reportedly 31-year-old girlfriend in an argument in which he repeatedly voices racist sentiments towards blacks, Jewish groups have been joining in the chorus of condemnation of him.

“The remarks attributed to Los Angeles Clippers owner Donald Sterling are reprehensible,” said Abraham H. Foxman, the Anti-Defamation League’s national director in a statement released April 28. “If the National Basketball Association’s investigation reveals that Mr. Sterling in fact made these racist and intolerant statements, we expect and anticipate a swift and forceful response.”

Rabbi Steven Wernick, executive vice president of the United Synagogue of Conservative Judaism and the group’s president, Richard Skolnik, deemed it “especially disturbing to read about the hideously racist comments” attributed to Sterling in the run-up to Yom HaShoah on April 28—a day on which Jews around the world recall those slaughtered in the Holocaust.

Recalling “the silence of too many” in the face of the Nazis’ early acts of anti-Semitism and later genocide, the two communal officials said, “We join those who condemn Mr. Sterling’s racist comments, and all such bigotry.”

In the taped conversation, the man identified as Sterling repeatedly chastises his mistress, V. Stiviano, for bringing black people to Clippers games, for being photographed with black men and for posting such photographs on her Instagram account for all to see. She protests that she herself is both Mexican and black.

“We don’t evaluate what’s right and wrong,” he admonishes Stiviano when she says she doesn’t discriminate against people on the basis of race. “We live in a society. We live in a culture. We have to live within that culture.”

As a young man, Sterling made a name for himself as a divorce and personal injury attorney. He then moved into real estate and became one of the largest property owners in southern California. Moving into the sports world, he purchased the Clippers in 1981 for $12 million, which seems a steal today. Bloomberg Businessweek estimated its worth on the market this week at “$750 million or more…even in a fire sale.”

Today, Forbes lists Sterling’s own net worth at $1.9 billion and ranks him as No. 974 among the world’s richest people.

Sterling’s involvement in Jewish charities and organizations is spotty. In 1974, he opened up his Beverly Hills home for a fundraiser for the Sephardic Women’s Division of the United Jewish Welfare Fund, the predecessor of the Jewish Federation of Greater Los Angeles.

Ironically, the guest of honor at this function was Gerda Weissmann Klein, the Holocaust survivor who would go on to win an Academy Award in 1995 for One Survivor Remembers, a short film based on her inspiring life. At the age of 89, Klein continues to work tirelessly as a human rights activist, spreading a message of tolerance and speaking out against bigotry.

In 1991, Sterling invited Israel’s championship basketball team, Maccabi Tel Aviv, to play the Clippers in two exhibition games in southern California. Sterling promised to donate the proceeds from the games to the Maccabi Tel Aviv Sports Organization to help fund its youth programs.

And in January 2006, Sterling was inducted into the Southern California Jewish Sports Hall of Fame during a gala dinner at the Milken Jewish Community Center in West Hills.

Some of the honors from Jewish organizations listed in Sterling’s bio are harder to verify, such as a 1998 Los Angeles Yeshiva Golden Menorah Humanitarian of the Year award.

Asked about his involvement in Los Angeles’ organized Jewish community, Jay Sanderson, CEO and President of the Jewish Federation of Greater Los Angeles, told the Forward that Sterling “has made a lot of small gifts to a lot of organizations” including the federation.

But he emphasized, “The leadership of our community is deeply disturbed by his comments. They certainly don’t reflect the views of the Jewish Federation of Greater Los Angeles.” Sanderson added: “One individual’s racism is not reflective of the Jewish community.”

Known for his frequent newspaper ads in which he touts the many honors bestowed upon him, Sterling was slated to receive his second NAACP Lifetime Achievement Award at the group’s 100th anniversary celebration next month. Following the controversy caused by the leaked tapes, the organization retracted its scheduled award.

Some media reports have speculated that Sterling brandished his philanthropy in part to offset a reputation for prejudice and abusive landlord practices that existed even prior to the release of the tape. Numerous lawsuits have been filed against Sterling making such allegations, including one by NBA great Elgin Baylor for wrongful termination as the Clippers general manager. In it, Baylor alleged age and race discrimination. Sterling won that suit. But he settled a 2005 suit for housing discrimination filed against him by Los Angeles’ Housing Rights Center and agreed to pay the plaintiffs’ legal fees.

Meanwhile, according to New York Magazine, Sterling’s wife, Rochelle Sterling, filed a suit last month against Stiviano. In the lawsuit Rochelle Sterling alleges that “the feminine wiles of Ms. Stiviano overpowered the iron will of” her husband, “who is well known as one of the most shrewd businessmen in the world.”

Rochelle, whom Sterling met while working his way through college as a furniture salesman at a shop owned by her father, has been married to the Clippers owner for more than 50 years. They have three children together. In her suit, she alleges that Sterling met Stiviano at the 2010 Super Bowl in Miami, and that he has since given her a Ferrari, two Bentleys, a Range Rover, and a $1.8 million duplex and $250,000 cash.

Stiviano’s attorney, Mac Nehoray, has confirmed that the tape is authentic but said that his client did not release it to TMZ, the celebrity news outlet that broke the story.

The Clippers have not confirmed that Sterling is the voice on the tape. But in an official statement on behalf of the Clippers, team president Andy Roeser asserted that the statements on the tape do not reflect Sterling’s “views, beliefs or feelings.”

Who Is Donald Sterling and How Did He Become Synonymous With Bigotry?