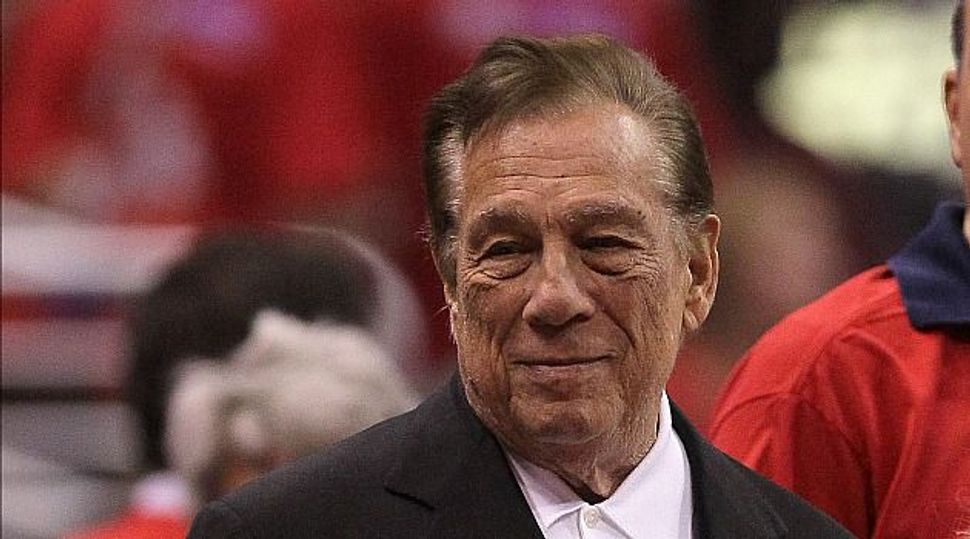 Several hours before Yom HaShoah solemnly commenced, the website deadspin.com released the fullest version yet of the secretly recorded conversations between Donald Sterling, owner of the Los Angeles Clippers, and V. Stiviano, his ex-mistress. Their subject matter, Sterling’s antipathy toward black Americans, at one point veered in a remarkably timely direction.

“Isn’t it wrong?” Stiviano asks. “Wasn’t it wrong then? With the Holocaust? And you’re Jewish; you understand discrimination.”

To read this exchange is to be confronted by some bizarre amalgam of a 1930s screwball comedy and a Sidney Lumet moral drama. In this real-life version, it takes a gold digger scorned to teach a billionaire mogul the lesson of his own history. And in so doing, Stiviano has helped frame the Sterling scandal in Jewish terms.

Our effort as Jews to extract meaning from the Shoah has involved both parochial and universal elements. Yes, we Jews were uniquely singled out in massive numbers for extermination. And yes, our communal experience of genocidal hatred compels us to zealously oppose all other forms of bigotry, for we know where bigotry leads.

Sterling, evidently, got only half the answer right on the final exam. As his own words make clear, he believes that racism against blacks cannot possibly be compared to the Holocaust. Racism is everywhere in his world, whether America or Israel. Nobody’s tolerant. Why should he be the odd man out?

By now, virtually any sensate person knows the gist of Sterling’s comments, as well as his documented history of being sued for racial discrimination as both large-scale landlord and NBA team owner. Making sense of Sterling’s twisted self requires examining it through both American and Jewish eyes. He draws on the worst aspects of that dual heritage.

With his black-Mexican mistress and his ownership of a largely black team in the blackest of all major sports, Sterling brings to mind Strom Thurmond and Lee Atwater. For those white Christian Southerners, as much as for Sterling, the hatred of blacks was inextricably bound up with the attraction to blacks.

Thurmond, the now late senator who launched the segregationist Dixiecrat movement in 1948, sired an unacknowledged biracial child with his family’s black maid. Atwater adored blues music even as he cynically played the race card in the Willie Horton commercial that helped win George H.W. Bush the 1988 presidential election.

Jewishly, Sterling represents a small-minded past that, unfortunately, refuses to die in its entirety. He is the very stereotype of the Jewish slumlord, profiting immensely from renting to the poor. His dismissal of black American suffering, a bloody epic from the Middle Passage to Trayvon Martin, recalls the lowest moments of black-Jewish acrimony from decades ago, with its vindictive arguments about whose tragedy was worse.

Sterling’s statements about Israel also echo from a benighted past. On the taped conversations, he excuses his own racism by saying that in Israel, black Jews and white Jews are treated unequally. He is mired in a view of Jewish identity that is both racial and tribal, with membership available only to Ashkenazim like him.

However imperfect Israel has been in assimilating “black Jews” — a term we might extend to Sephardic, Mizrahi and Ethiopian refugees and immigrants — the country has nonetheless operated on a principle of radical inclusiveness based on Judaic practice. And so has contemporary American Jewry, with its growing number of nonwhite converts. Perhaps what really bothers someone like Sterling is the growing realization that being Jewish, whether in America or Israel, is no longer tantamount to being white. For Jews of Sterling’s generation, after all, the battle was to convince WASP America that they were white. Now the club is no longer so exclusive.

In the days since the Sterling-Stiviano tapes became public, a great deal of attention has turned to the National Association for the Advancement of Colored People. Despite Sterling’s ample record of racial discrimination and insensitivity, he had been slated to receive a Lifetime Achievement Award from the group’s Los Angeles chapter. Now, embarrassed by the disclosures, the chapter has revoked the honor.

The Jewish community needs to similarly revisit its embrace of Sterling. Late in 2013, his foundation awarded grants to these Jewish organizations in the Los Angeles area: Jewish Federation of Greater Los Angeles, Jewish Vocational Service, the Museum of the Holocaust, Creative Arts Temple, the Museum of Tolerance, Temple of the Arts, Beit T’Shuvah.