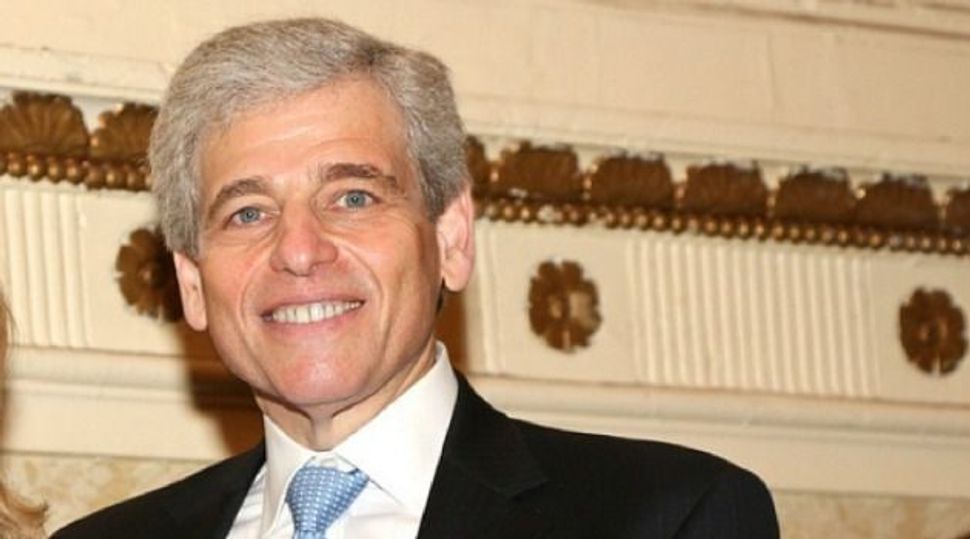 Face of Disgrace: William Rapfogel was the face of the Met Council. Now he’s going to prison for fraud. Image by Met Council

In court in April, William Rapfogel wore a huge black yarmulke and a grim expression as he admitted to stealing more than $1 million from the Metropolitan Council on Jewish Poverty, the major New York charity he ran for two decades.

Rapfogel’s future is clear: The 59-year-old, once among New York’s most powerful political figures, will spend up to 12 years in state prison.

Most of Met Council’s top leadership has been replaced since August. But the new leaders have been tight-lipped about their plans to rehabilitate the muddied group.

Now, as Met Council restarts fundraising efforts and begins once again to hold public events, two things are apparent: The group has not toned down its lavish public events. And political officials and operatives are still clamoring for photo opportunities with its leaders and logos.

Met Council would not provide anyone to speak for this story. The group did not respond to questions about its fundraising or about the biography of David Frankel, its new executive director and CEO. In a one-sentence statement to the Forward, Met Council said it was “working tirelessly to ensure that poor New Yorkers have the resources and support they need to become self-sufficient.”

On April 3, less than three weeks before Rapfogel and Cohen’s guilty pleas, Met Council supporters gathered in the Cotillion Room at The Pierre Hotel, on Fifth Avenue in Manhattan, to celebrate the organization and its backers. Placards in the entry hall thanked mega-developer Bruce Ratner and major Chabad donors Pamela and George Rohr. A $25-per-ticket raffle offered nice prizes: a big flat-screen TV, Giants and Yankees tickets.

Met Council events before the scandal were well known for the hordes of local politicians who showed up to have their photos taken. Most of the pols seem to have skipped the Food for Life gala. And a March story in the New York Jewish Week claimed that Frankel was less interested in political glad-handing than his predecessor.

“I’m not naive enough to think relationships aren’t important,” Frankel told the Jewish Week. “However I just came from government, so I know that it is much more focused on quality and efficiency of the services that you deliver than whose name is on the [office] door.”

In one photo, Frankel stands next to Rabbi Joseph Menczer, a prominent Hasidic political activist with a controversial past. A top official with the state health department was fined in 2001 for taking gifts from Menczer and a colleague after Menczer and the colleague helped raise $500,000 for then-governor George Pataki’s election campaign and proceeded to cultivate unusual access on behalf of their for-profit business.

Frankel, who was hired last August, served previously as commissioner of the New York City Department of Finance under Mayor Michael Bloomberg. Before going to work for the city, Frankel worked at AIG and Morgan Stanley, two of the Wall Street institutions that required the largest bailouts after the 2007 financial collapse.

Frankel had a senior back-office role in both places. At AIG he was head of global operations for a subsidiary called the AIG Trading Group. That subsidiary was a close corporate cousin of AIG Financial Products, whose credit default swaps torpedoed the entire firm. But Frankel’s shop was not involved with credit default swaps, according to Roddy Boyd, author of “Fatal Risk,” a 2011 book on the AIG debacle.

Frankel’s role at AIG-TG would have been relatively low profile, according to Boyd. “You’re involved in the accounting, the trade clearance, the computer stuff,” Boyd said. Important, but not as lucrative as a major trader. “The naked fact of the matter is, it was a kind of a back-office or administrative position,” Boyd said.

Frankel left AIG in 2004, well before the firm required an $85 billion bailout from the federal government. He went on to Morgan Stanley, where he served in a similar role as global co-head of fixed income operations. That firm, too, was rocked during the financial crisis, borrowing more from the Federal Reserve than any other U.S. bank in the United States and losing billions in value.

When Frankel left Morgan Stanley in 2009, he was one of a large number of Wall Street refugees seeking new work. He found his new role outside the private sector.

According to Rabbi David Teutsch, who heads the Center for Jewish Ethics at the Reconstructionist Rabbinical College, that’s a testament to the value of a Wall Street background — and an indictment of the Jewish communal apparatus.

“Somebody with those kinds of Wall Street connections is in a really good position to raise money for the organization,” Teutsch said. “Most people who go into Jewish communal work with the intention of doing good never develop the expertise or effectiveness [to run] an organization of this size…. It’s a comment on the failure of lay and professional leaders to nurture and develop and respect Jewish communal professionals.”

The new executives whom Frankel is bringing in with him come from similar business and civil service backgrounds, as opposed to the world of Jewish social and political activism that produced Rapfogel and Cohen. Eric Munson, Met Council’s new chief of staff, comes from the Department of Finance with Frankel. Joyce Bloom, Met Council’s new chief human resources officer, is a former chief human resources officer of a subsidiary of the Interpublic Group of Companies, the massive advertising agency holding company.