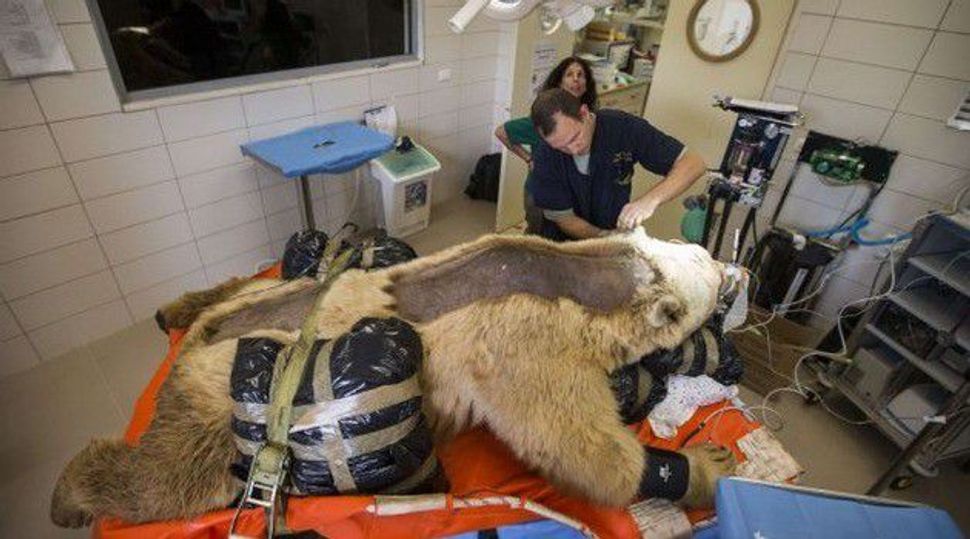 “He changes position from side to side all the time, which means he can,” says Horowitz of the quarter-ton quadruped, who was the biggest animal – by far – to undergo spinal surgery. “A person would probably be flat on his back for much longer after an operation like that. Nobody thought his recovery would be so rapid.”

Mango evidently isn’t just shifting about to alleviate discomfort, as he has been sleeping on both his right side and his left, Horowitz explains.

The brown bear, who is rather honey-blond in color, is visited every day by his doctors, including the veterinary team from the Hebrew University of Jerusalem led by Merav Shamir, who headed the surgical procedure last week.

The zoo still has no idea how the bear incurred the injury, between the second and third vertebra. But in any case, “Mango’s recovery has been meteoric,” says Horowitz.

Mango’s discomfort had been noticed by the keepers at the zoological park, more usually known as the Ramat Gan Safari Park. They waited a few days, hoping his condition would improve. When it didn’t, they called in the doctors, knocked him out and x-rayed his spine.

To be clear, Mango wasn’t the first bear to undergo spinal surgery. A black bear had undergone the procedure in the United States – but he was half Mango’s size. And the biggest animal Dr. Shamir had ever operated on was a lion, which weighed 100 kilos less than our bear, who’s still getting his medicated cake, and eating it too.

“It just goes to show that these animals are powerful and have tremendous healing powers that we can’t understand,” says Horowitz. Not that they can complain to the management – but when they’re in pain, it shows, and Mango is doing very well.