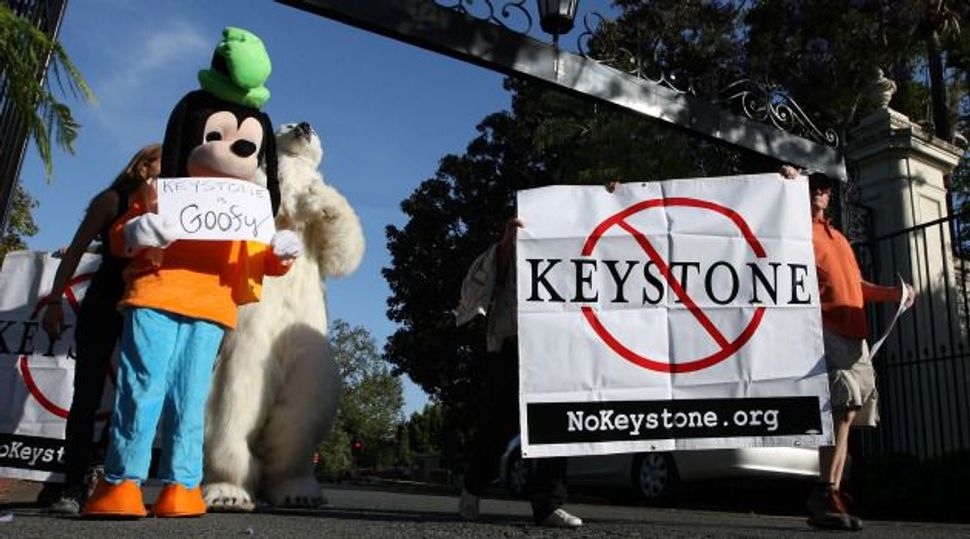 Environmentalists demonstrate outside President Obama’s speech at the founding of UCLA’s new Genocide Studies center. Most Jewish groups disagree with the tactic of divestment from fossil fuel companies, feaaring it may boost its use in the Israel debate. Image by getty images

The recent 1,300-page National Climate Assessment drove home in the starkest terms so far the clear and present danger human-influenced climate change poses to the United States and to the survival of large human populations worldwide.

But as activists and institutions around the country step up efforts to staunch fossil fuel wastes that drive global warming, Jewish religious and communal groups are virtually unanimous in rejecting one of the main tactics being urged to push for corporate change: divesting fossil fuel companies from their stock portfolios.

A landmark decision by Stanford University in May to rid its $18.7 billion endowment of all coal investments marked a breakthrough for divestment advocates and put the question front and center for other mainstream institutions. But in interviews with the Forward, Jewish institutional leaders saw the issue as secondary to other global and social issues.

“We should be thinking of divestment only in terms of very extreme threats of the kind that Iran poses,” said Richard Foltin, director of national and legislative affairs at the American Jewish Committee. Foltin was referring to mainstream Jewish communal support for divestment from companies doing business with Iran, whose development of its nuclear capabilities is viewed as a cover for developing nuclear weapons that would pose an existential threat to Israel.

Kara Kaufman, a 2012 graduate of Brown University and committed climate activist, sees this perspective as one bound to alienate younger Jews.

“The Jewish community could play a real leadership role and be on the right side of history,” said Kaufman, who is the great great-granddaughter of legendary Yiddish author Sholem Aleichem.

As young Jews grapple with the environmental future they will face and how to respond to it, both as human beings and specifically as Jews, the Jewish community, Kaufman said, can “set an example for other faith communities to follow by supporting divestment as one of a handful of powerful ways to build the movement towards a stable planet and future.”

But Jews urging such a move on national organizations face a formidable hurdle: the fear of legitimizing divestment as a tactic, considering its use by pro-Palestinian groups against Israel.

In 2003, the Jewish Council for Public Affairs, an important mainstream Jewish umbrella group, adopted guidelines for judging boycott or divestment initiatives that urged avoiding them in most cases. The guidelines, which are still viewed as the communal standard for judging these initiatives, recommend avoiding boycotts, divestment and economic sanctions because such measures could “deny the Jewish community the higher moral ground in opposing boycotts against Israel or Jewish interests.”

The goal of those supporting fossil fuel divestment is to withdraw as much money as possible from fuel and coal company stocks due to the climate-warming carbon dioxide these fuels release into the atmosphere. Advocates hope to thereby weaken the political clout of fossil fuel corporations and ultimately prevent them from extracting the rest of their fuel stocks. With student activists playing a major role in driving the campaign, universities, with their often sizable endowment funds, have been the dominant arena for divestment activity so far.

Organizers now list a dozen colleges throughout America that have signed on to the divestment drive. Stanford, the largest among them, chose to divest only from coal companies, citing this energy source as “one of the most carbon-intensive methods of energy generation.”

“Stanford has a responsibility as a global citizen to promote sustainability for our planet,” the school explained in a statement announcing its decision. The announcement described coal company divestment as “a small, but constructive, step while work continues, at Stanford and elsewhere, to develop broadly viable sustainable energy solutions for the future.”

Critics of divestment question the tactic’s actual impact in pressuring companies or societies to change their policies. Greg Pitts, who specializes in sustainable and green investments, acknowledged that divestment “is always more about the public impact than about the divestment itself.”

Pitts noted that much of the success in using investor purse strings to promote social causes has not come through divestment but rather through shareholder activism. In these cases, groups of shareholders in a company use their collective power to negotiate with the board and lead changes in the company.

In the religious world, fossil fuel divestment is only starting to show signs of success. Only one national denomination, the United Church of Christ, has adopted divestment, and several local churches also answered the call.

Eli Gerzon, state divestment organizer for 350 Massachusetts Better Future Project, started the Jewish Climate Action Network in Massachusetts with a local rabbi and hopes to convince Massachusetts synagogues to divest. “This is a real issue of social justice, civil rights and just maintaining the world,” he said. “And of course, it’s a matter of tikkun olam” [repairing the world].

On the national level, Rabbi Arthur Waskow of the Shalom Center has already signed up 100 rabbis on a fossil fuel divestment petition.

But movement is slow and is taking place mainly on the sidelines of communal activism. At Brandeis University, the student body passed a resolution last year calling on the university to explore divestment. “From a moral perspective it’s very important to divest,” said Iona Feldman, 18, who is active in the school’s divestment campaign. John Ballantine, a senior lecturer and member of the university’s divestment committee, said an initial discussion draft regarding fossil fuel should be ready by the end of June and that decisions will be made by the end of the summer.

But national Jewish organizations, which not only set policy but also hold significant endowment funds, have either skirted the divestment move or rejected it altogether.

The American Jewish Committee boasted three years ago of receiving LEED gold certification — a prestigious environmental recognition — for transforming its New York headquarters into an environmentally friendly, energy-efficient office building. But the group has framed its support for such policies as part of its support for U.S. independence from foreign, and particularly Arab, oil suppliers rather than as backing for environmental concerns per se.

In line with this, the AJC supports the Keystone pipeline project to transport Canadian tar sands oil from remote and vast northern fields to U.S. markets — a project targeted by global warning activists as their top priority for blocking because of the amount of carbon dioxide it would release from the ground.

“We’re not going to go back to the Stone Age,” the AJC’s Foltin said. Divestment, he said, “is focused on the wrong end of the problem.” He argued that the campaign would not decrease demand for energy or help develop alternatives.

Foltin also stressed that the AJC does not “use our endowment investments for political statements.”

In the past, however, the Jewish community did not hesitate to use these very same investments as a tool to advance communal goals. Groups stood behind legislation imposing trade restrictions on the Soviet Union until Jews were allowed to leave the country; some supported counter-boycotts against companies that adhered to the Arab boycott against Israel and, more recently, Jewish groups led calls to divest from Sudan because of genocide the Khartoum government was accused of committing in the country’s Darfur region. Most noticeable today, however, is the campaign supported by a wall-to-wall coalition of Jewish groups to divest American funds from Iran.

The difference this time?

Some groups argue that fossil fuel is not a clear-cut case compared to previous campaigns and that chances of it succeeding in bringing down carbon-emitting fuel companies are, at best, slim. But the concern about legitimizing the use of divestment, one of the three pillars of the Boycott, Divestment, and Sanctions movement targeted at Israel in recent years, is ever-present.

That association got some traction recently during a debate over fossil fuel divestment at Swarthmore College. “Last year, there was a lot of agitation for companies to support Palestine and stop investing in companies having to do with Israel,” Swarthmore board chairman Giles Kemp told The New York Times, explaining one factor in his school’s rejection of the tactic. “Those students were as fervent in their cause as these students are in theirs.”

JCPA also operates the Coalition on the Environment and Jewish Life, but the council has yet to adopt a policy on fossil fuel divestment.

Jared Feldman, the council’s Washington director, expressed skepticism on the tactic’s efficacy. “Instead of talking about divestment, we should see how we can support development of alternative energy sources,” Feldman said.

If asked by member organizations whether to divest, Feldman said he’d advise these groups to “first look inwards” and ask themselves if they’ve done enough as an organization to improve environmental sustainability.