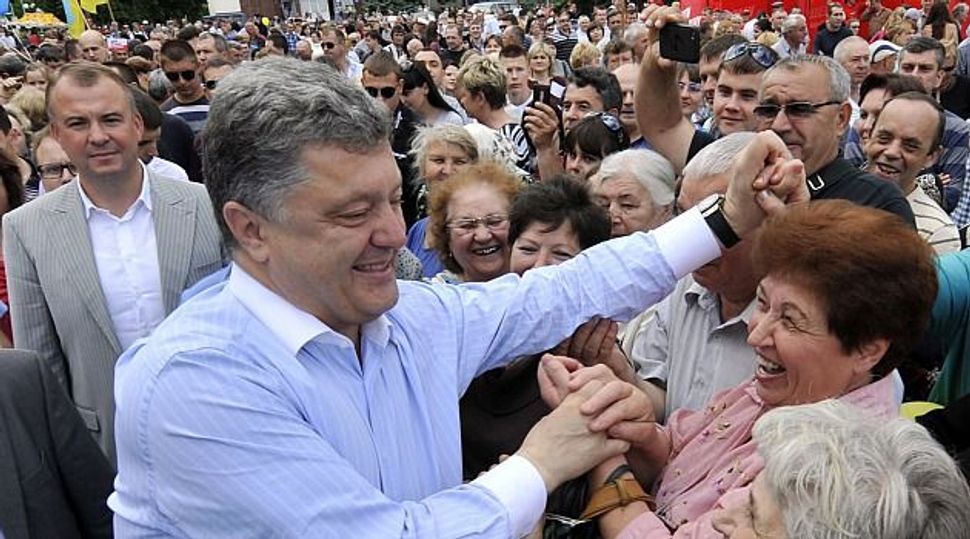 Mezuzah in the Closet? Confectionary mogul Petro Poroshenko is leading the polls in Ukraine’s presidential race. Does he have a secret Jewish family history? Image by getty images

(JTA) — Even in normal times, Kiev can feel like a city perpetually under construction. Potholes are “fixed” with flimsy coverings, ramshackle scaffolding clings precariously to the sides of buildings, and tangles of electric wires seem ever ready to combust.

But since the outbreak of anti-government protests in November, the sense of flux in the Ukrainian capital has been greater than ever. Two kinds of tents now dot the city center: Hundreds of khaki-colored bivouacs housing the revolutionaries whose protest movement led to the ouster of President Viktor Yanukovych in February, and more recently erected campaign booths making bold promises of a brighter future ahead of Sunday’s presidential elections.

Politicians describe the vote, the first since a wave of civil unrest broke out in the capital in November, as the most crucial since Ukraine emerged as an independent country in 1991 following the breakup of the Soviet Union. But many disillusioned voters here seem to place more faith in the tired men and women inside the khaki tents — and their pledge to speak truth to power — than in any of the candidates featured in the election posters.

Marina Lysak, a Jewish activist who participated in the protest movement known as Maidan, after the central Kiev square where they took place, told JTA that the tent people are there to send a message to whomever prevails in the election.

“The statement is: ‘We are watching you. If you betray us again, we will not remain silent,’ ” Lysak said. Whoever wins on Sunday faces a herculean set of challenges. The first order of business will be dealing with pro-Russian separatist militias that now hold several cities in eastern Ukraine, where Russian speakers constitute a majority.

The new president also must address a looming economic crisis. Since November, the Ukrainian currency, the hryvna, has plummeted, losing 35 percent of its value against the U.S. dollar. Some analysts worry that the heavily indebted nation will soon default.

And then there’s the sensitive question of clearing encampments from the scorched earth of Maidan, where most tents are pitched on asphalt laid bare by demonstrators who pried the cobblestones loose to hurl them at government forces.

The leading candidate for these tasks is Petro Poroshenko, 48, an oligarch from Odessa and the head of a confectionary empire. Polls predict Poroshenko will take 30 percent of the vote in the first round of balloting.

Yulia Tymoshenko, a former prime minister recently released from jail after serving three years on what she claims were charges trumped up by the Yanukovych regime, is expected to finish second with anywhere from 6 to 18 percent.

Assuming no candidate takes more than 50 percent of the vote — more than 20 are competing — a runoff election between the top two finishers would take place on the following Sunday.

Jewish community leaders have remained officially neutral about the candidates, but many Ukrainian Jews support Poroshenko, a former foreign minister rumored to have Jewish roots.

“He has a unique set of skills that absolutely make him the man for the job,” said Igor Schupak, a Jewish historian and director of the Dnepropetrovsk-based Jewish Memory and Holocaust in Ukraine Museum. Business know-how and foreign relations experience “give Poroshenko a toolbox that places him in a league of his own in comparison to the other candidates.”

The sense that Poroshenko is the preferred candidate only when compared to other lesser options isn’t an uncommon one, even among those working to put the oligarch in office.

“He’s no saint — none of them are,” said Svetlana Golnik, who volunteers with the Poroshenko headquarters twice a week in downtown Kiev. “But he is cleaner than most other oligarchs and he delivers on his promises. Anyway, right now he’s what we have to work with.”

James Temerty, a non-Jewish Canadian business magnate who founded the Ukrainian Jewish Encounter to promote interethnic dialogue, said it would be very difficult for Poroshenko to make significant changes without further destabilizing the economy.

“The best hope here is to move toward Europe, and that will stop the corruption gradually,” Temerty said. “He said he’d do it.”

According to the popular Russian television channel Russia-1, Poroshenko’s father was a Jew named Alexei Valtsman from the Odessa region who in 1956 took on the last name of his wife, Yevgenya Poroshenko.

Poroshenko’s media team did not reply to JTA requests for comment, but they are not indifferent about the subject.

Moshe Azman, a chief rabbi of Ukraine, said he asked Poroshenko directly about the rumors.

“He told me he wasn’t Jewish,” Azman said.

Even if the rumors were true, Poroshenko wouldn’t be the only candidate for president with Jewish roots. Vadim Rabinovich, a billionaire media mogul and founder of the All-Ukrainian Jewish Congress, is running on a platform combining a tolerant attitude toward Ukrainian minorities with plans to dispense with Ukraine’s quasi-federal political system and reduce taxes.

Although he barely registers in the polls — current figures show him taking just over half-a-percent of the vote — his candidacy has at least one high-profile supporter: Rostislav Melnyk, who became famous in Ukraine after surviving a savage beating by Yanukovych forces.

“I support Rabinovich’s platform and I will vote for him,” Melnyk said, “also because he is good for the future of the Jewish community.”