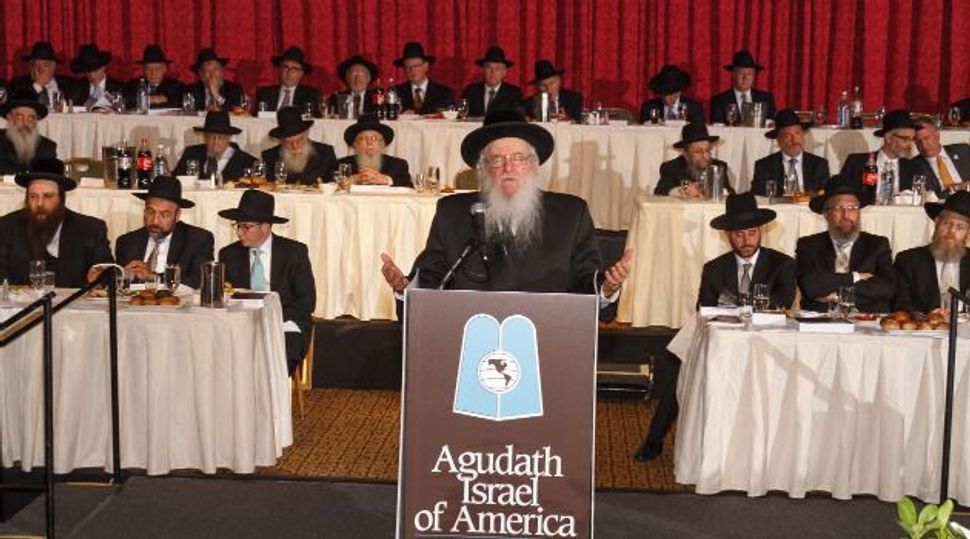 Image by Courtesy of Agudath Israel

“This kind of stuff has been part and parcel of what our movement has been speaking about since time immemorial,” said Rabbi David Zweibel, Agudath Israel’s executive vice president, of the remarks, which the Forward first reported on May 28.

Perlow, also known as the Novominsker rebbe, was speaking at Agudath Israel’s annual gala dinner at the Hilton Hotel on May 27. New York City mayor Bill de Blasio spoke immediately after Perlow, and was in the audience for Perlow’s speech.

A New York Times column on May 29 criticized de Blasio for not responding to Perlow’s remarks. De Blasio aides told the Daily News that the mayor was talking during Perlow’s speech and didn’t hear what the rabbi said, according to a May 29 report.

Perlow focused most of his criticism on the nascent Open Orthodox movement, which favors a larger role for women in religious practice. In an online statement, Agudath Israel took issue with some of the characterizations of Perlow’s remarks, but doubled down on his attack on Open Orthodoxy.

“Rabbi Perlow, and the community of Orthodox Jews who look to him as a leader, have nothing but love and concern for all Jews, regardless of their affiliation, regardless of how misled they may be by their religious leaders,” the statement read.

In an interview with the Forward, Zweibel said that defining the bounds of Orthodoxy is Agudath Israel’s job.

“One of the foundational missions that we see our organization as having is being ideological when ideology is called for,” Zweibel said. Agudath Israel answers to a group of rabbis, nominally led by Perlow, called the Council of Torah Sages. “They believe it is a central purpose of theirs to be mindful of what the boundaries of Orthodoxy ought to be,” Zweibel said of the Council.

Zweibel said that he knew beforehand that Perlow planned to address the topic. He said that he saw the speech, in part, as an appeal to the Modern Orthodox world, particularly as graduates of Yeshiva Chovevei Torah, the fledgling Open Orthodox rabbinical school, begin to seek pulpit jobs.

In one potentially explosive line in his speech, Perlow criticized the Israeli Chief Rabbinate for not being “sensitive” to the alleged threat posed by Open Orthodoxy. The Israeli Chief Rabbinate is dominated by the Israeli ultra-Orthodox, and is generally an ally of Agudath Israel. Zweibel said that he did not know exactly what Perlow was referring to, but that he could have been voicing concern about a recent visit by Israel’s Ashkenazi chief rabbi David Lau to YCT.

Asked about criticism of Perlow for making the ideological attack in front of the mayor, Zweibel said that no venue would have been private.

“Nowadays really there is no right setting if you’re concerned about these things,” Zweibel said. “You go to what you think is a private event and nowadays with Twitter and Facebook it’s out there in a couple of minutes.”