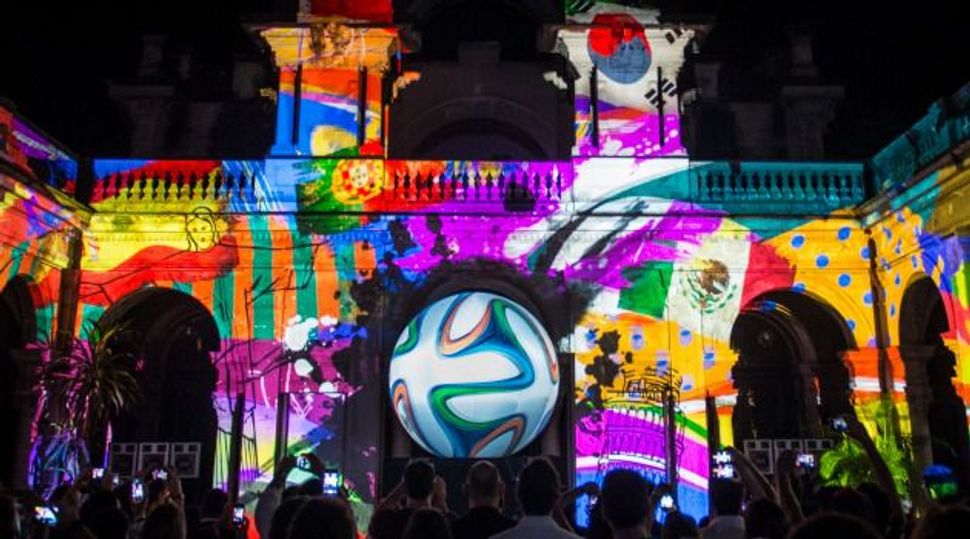 Not every Jew in Rio cares about the World Cup. And some of them, the cariocas ( as the locals are known), are closest to the action.

The Maracanã and adjacent Tijuca neighborhoods in Rio’s North zone are home to one of the largest concentrations of Jewish life in the city. There are more than a dozen institutions — including synagogues, schools, clubs and hospitals — situated within a two-mile radius of the legendary Maracanã stadium (which will host eight matches during the tournament, including the final).

But for the sheer majority of their employees and patrons, it will be business as usual during the World Cup — except for, maybe, the occasional traffic jam on game days.

Ditta Dolejsiova’s apartment in the heart of Copacabana is bound to become World Cup central during the tournament. She’s hosting seven people from her native Slovakia (including her parents, sister and two nephews), plus her Chilean boyfriend, who wants to go to as many Chile games as possible.

As a director for a youth policy development not-for-profit and a consultant for international organizations, including a few United Nations agencies, 37-year-old Dolejsiova is more worried about any possible spike in violence or police brutality in some of the poor communities with which she works.

“My family is going to the final! They spent a small fortune to purchase the tickets — I’m not even going to tell you how much, but it’s absurd,” she saId. “But of course, [even] I’ve ended up catching the World Cup fever a bit.”

One of the Brazilian institutions providing support for Jewish soccer fans from abroad is the Hebraica club in Rio. The club’s president, Luiz Mairovitch, decided to offer cheap accommodations after receiving a number of emails from Israelis having a hard time finding a place to stay.

“When I suggested it to the board, some people were against it. Someone asked me: ‘Why take the risk? These kids will be smoking pot and partying all night; it’s going to be trouble.’ But then, the club belongs to the community. If we can’t open our doors to the community, what’s the point of having a club in the first place?” Mairovitch said.

However, Hebraica, the iconic center of Jewish sports in Rio, is taking a few precautions. All boarders must be affiliated with a Jewish institution in their home country, and send a copy of their passport for security clearance with the local Jewish security groups. The dorm facilities — built to host dance companies that participate in the annual Israeli folk dancing festival, the club’s biggest event — can house up to 550 people. But according to Mairovitch, there won’t be that many guests bunking there during the World Cup.

“We really enjoy having people over, but if there are too many people we need to have a medical team around, increase security, all of that,” he said. “We’re not doing this for the money — we’re not even putting it out there, really. The idea is to have 30, 40 kids, tops.”

Hebraica is charging 130 reais ($58) per night per person, breakfast included, which is a great deal — a true metsieh, *a bargain — considering that even hostels in the city will cost you in average 450 *reais ($200) a night over the World Cup period. The club is also organizing gatherings on the dates Brazil is playing: Barbecue will be served (no alcoholic beverages), and to keep things fun even when the home team is already in an unassailable lead, a bicycle will be raffled off at the end of each match.