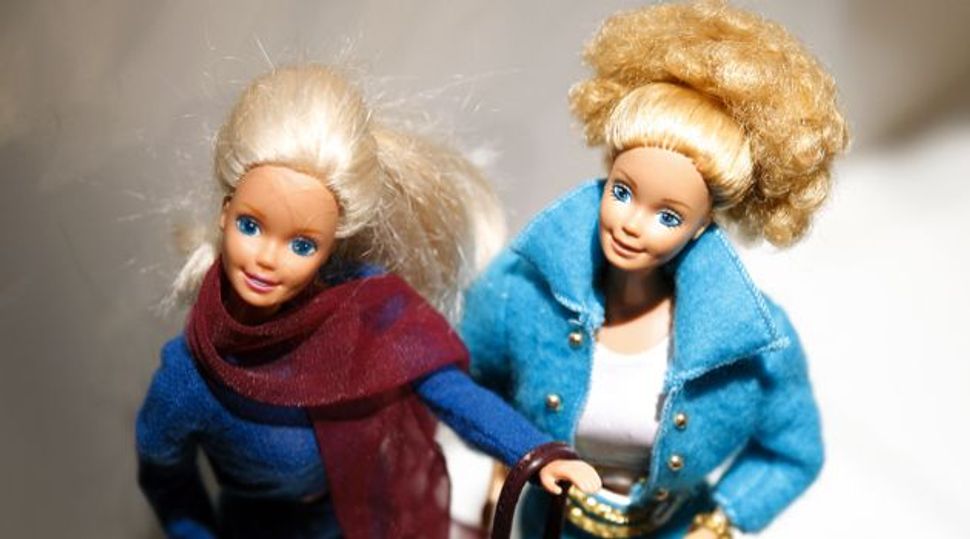 The last time I took care of Hanina, the 6-year-old I baby-sit, we played Salon, a game in which Hanina’s Barbies visit the salon, otherwise known as the second-floor bathroom, and we peel off their clothes, do their hair, then dress them up.

You may wonder what a 6-year-old boy is doing with Barbies in the first place. They belonged to his mom. She’d hung on to them, no doubt hoping to pass them along to a daughter. But Hanina is her thirdthrough son and last child, so they ended up his.

Hanina’s Barbies participate in the same activities as his action figures: They explore. They fight battles. They act out Torah stories. After all, Hanina is an Orthodox Jew.

When my own son became a teenager who needed independence and space rather than moment-to-moment mothering, I filled the void this left in my heart by babysitting. Because I am a secular, atheist Jew and Hanina is religious, caring for him for the past six years has meant, among other things, learning what it means to live a Torah-centered life. Hanina, the son of an eminent Torah scholar, has always been happy to instruct me.

Today, Hanina informed me, the Barbies, once coifed and dressed, would take part in a contest in which Ken would choose “the most beautiful one” to marry. (Hanina, I‘m guessing, has been learning about Queen Esther at school.)

“Beauty isn’t everything,” I pointed out. “When it comes to getting married, you also want a partner who is nice, kind and intelligent.”

Hanina picked up Ken, who then addressed the prettiest Barbie. “You are beautiful,” Ken told her. “And you look nice and kind and intelligent. If you win the contest I will marry you.”

The winner, Hanina told me, would get an additional prize: “When she dies, she will get to be buried in this lovely coffin!” He showed me a beautiful hand-painted wooden box that his Aunt Nancy gave him recently.

Along with one chosen by Ken, Hanina owns a total of four hand-me-down Barbies.

“Do they have names?” I asked.

“They are all named Barbie,” Hanina said.

Although actually, one is named Zombie Barbie, because Hanina, when he was younger, colored in her eyes and mouth with a blue pen, with alarming results.

It’s unlikely that Zombie Barbie will be winning any beauty contests.

Hanina explained the contest rules. After we did their hair and dressed them up, Ken would choose the best Barbie and marry her.

“The loser,” Hanina said, “will go to the guillotine.”

“Really?” I asked Hanina. “Isn’t that a little harsh?”

“Those are the rules,” he replied.

We brought the Barbies to the bathroom salon, where we set to work “dolling them up.” We soaked their hair, combed it out, then created the best hairstyle for each, after which they would go under a hairdryer made from a Dixie cup.

Once their hair was done, it was time to dress them.

“They have to be tznius,” Hanina said.

Like Hanina, I am a Jew. But because I’m a secular Jew, tznius is a word I was unfamiliar with. Not for the first time, Hanina took the opportunity to instruct me.

“Their bodies must be covered,” he explained. “Including their legs and arms and shoulders.” Because Hanina is an Orthodox Jew, his Barbies, too, must be Orthodox. Tznius, I gathered, is the term for the modest way that Hanina’s mother, and the other women in their community, dress.

Hanina evaluated the available Barbie clothing, almost all of which leaves Barbies legs, arms or shoulders exposed. But tznius could be accomplished, we decided, with the use of elegant shawls made from toilet paper.

Once all the contestants were glamorously but modestly dressed, they were propped up against the bathroom wall and Ken was called upon to judge. First he picked the loser. To my surprise, it wasn’t Zombie Barbie, but one of the others.

Everyone proceeded from the salon to the wedding site, which is Hanina’s bedroom.

I picked up Loser Barbie and tried to argue her case.

“I don’t want to have my head chopped off,” she protested. “I want to go to the wedding.”

“Those are the rules,” Hanina told her. “And the beheading is part of the wedding.”

The guillotine turned out to be the small blue suitcase in which the dolls and their wardrobe are stored. Hanina matter-of-factly put Loser Barbie in place, then slammed down the lid so that her head would drop into the suitcase.

When it didn’t, he handed her to me: “Can you help me with this?”

I pulled off Barbie’s head and handed it back to him.

“Oh, no! I’ve been decapitated,” Newly Headless Barbie exclaimed. “I hate it when that happens.” After a pause, I asked, “Say, Hanina, what’s that in your hand?”

“Uh, I could really use a head,” Decapitated Barbie said. “Would you give me that head?”

Hanina took Barbie from me, put her inside the suitcase, headless, and closed the lid.

“Can I at least be buried in that beautiful coffin?” Barbie asked him from inside the suitcase.

Hanina decided that Zombie Barbie could be the rabbi, after which Ken finally chose his bride, a Barbie with long blond hair who wears a frothy purple-and-pink frock that reaches to the floor, thus ensuring tznius.

“Thank you!” she exclaimed. “I love you.” She leaned toward Ken, making kissy-face noises.

“Yuck!” Hanina exclaimed, pulling Ken out of her reach.

“What about after they’re married?”

So that’s the kind of marriage it was going to be.

Rabbi Zombie Barbie quickly performed the ceremony. Then a couple of the troll dolls that Hanina also inherited from his mother got the suitcase guillotine treatment. (Their heads don’t come off, so we just pretended.)

“Is this still part of the wedding ceremony?” I asked.

“This is a very unusual wedding,” I said.

Once married, Ken and Barbie adopted a small stuffed koala and decided to honeymoon in the basement, where Hanina and I moved on to another favorite game in which I played the role of Haman’s daughter. I made the dire mistake of dumping big heaps of (pretend) garbage on the head of my evil father, gleefully played by Hanina.

There is no role for Barbie or the suitcase guillotine in this game, which is probably just as well.

Roz Warren writes for The New York Times and the Funny Times.