A Handful of Jewish Republicans Runs Far to the Right 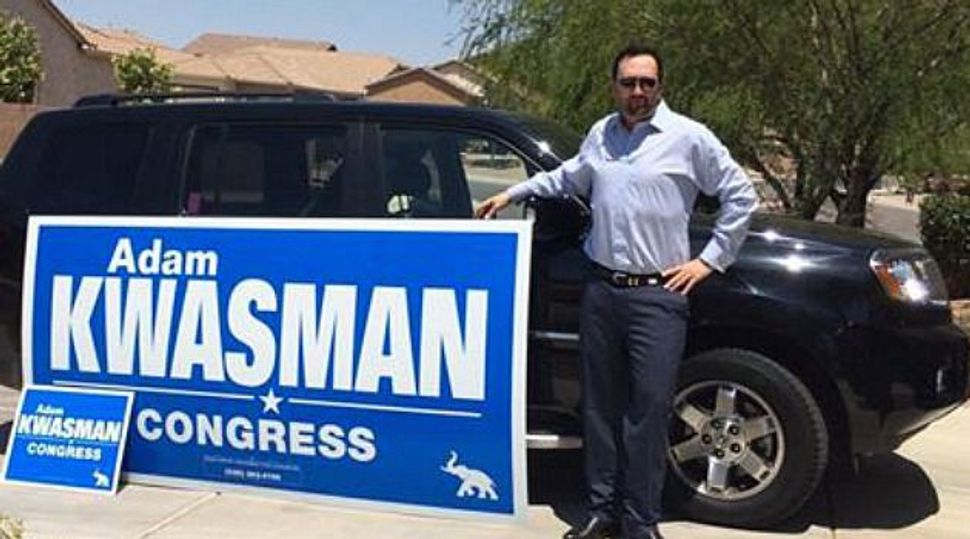 Running Right: Adam Kwasman is one of a handful of Jewish Republicans who are running for the support of conservative Tea Party supporters like the ones who toppled GOP leader Eric Cantor. Image by courtesy of adam kwasman

As establishment Jewish conservatives sat in stunned silence recently, sitting shiva over the defeat of Republican congressional leader Eric Cantor, a younger cohort of Republican Jews were jockeying vigorously to fill the vacuum he left as Congress’s only Jewish Republican.

With months to go until the 2014 congressional elections, it is not clear whether any of them will make it to Congress. Just as pointedly, it is unclear what brand of politics any putative successor to Cantor might bring.

But if the candidate who is considered the Jewish Republican with the best shot to win has his way, don’t look for a simple restoration of Cantor’s tight relationship with Wall Street and big tent approach to working with both establishment Republicans and hard-right tea party activists.

“We need to have some kosher tea in the United States,” declared Adam Kwasman, who is running for Congress in Arizona. “With Eric Cantor’s loss, a new generation of new Jewish Republicans are ready to take the mantle.” Not all Jewish Republican candidates campaigning now align themselves with the GOP’s Tea Party wing. But all take great pains to make clear that they are sympathetic to right-wing elements within their party that have become a deciding force in many races.

In an interview with the Forward, Lee Zeldin, a candidate for Congress in New York’s 1rst congressional district, called tea party activists in his district “great Americans” who wish to promote transparency and accountability. The tea party activists “are not what the Democrats are trying to paint,” argued Zeldin, a Republican state senator who is running for a district that includes most of Long Island.

Zeldin’s campaign got some unexpected national media attention recently when a fundraising event starring Cantor that had been planned weeks earlier became the venue for the former Republican Majority Leader’s first public appearance following his defeat.

“As Jews we have studied the Torah,” Cantor told participants at the June 14 Southampton event. “We read every week in some way, shape or form, and are reminded about personal setbacks. But we are also reminded about optimism of the future, about that bigger goal, that bigger vision that we as Jews are about.”

Proving he was still a donor magnet, Cantor raked in more than $100,000 for Zeldin’s campaign chest.

“Eric guaranteed there is a place at the table for people of our faith,” Zeldin told the Forward before the event. “There is definitely a vacuum left.”

Like most every other Republican, Zeldin doesn’t think Cantor’s loss had anything to do with his faith. He also doesn’t think there is an ideological lesson to learn from Cantor’s ill fortune, or that Virginia’s 7th district constituents sent a signal that even the slightest moderation is unacceptable in the current Republican climate. These takeaways, he and other Jewish Republicans argue, are only attempts by Democrats to spin the actual circumstances and to present the GOP as being in thrall to extremists.

Yet Zeldin is no centrist. He was recognized at the recent Conservative Political Action Conference as one of the top ten conservatives under 40 and spent Shabbat dinner with the Jewish participants of the CPAC conference. “It was standing room only,” he noted, a sign that conservative Jewish Republicans are growing in numbers.

Zeldin is facing a difficult race against sitting Democratic incumbent Tim Bishop. The Cook Political Report, which follows races closely district by district, ranks Zeldin’s district as “leaning Democrat,” an assessment that does not bode well for the GOP candidate, but still leaves the door open for surprises.

Bruce Blakeman, who is running in New York’s 4th congressional district, described himself as “a JROC Republican. The acronym, he explained, stands for “Just Right of Center Republican.”

Blakeman, whose Long Island district in Nassau County has a large Jewish population including many Orthodox Jews, is facing an even tougher race for the open seat previously held by Democrat Carolyn McCarthy. Cook currently ranks the race as “likely Democratic.”

Nevertheless, Blakeman argued, Jewish voters in his district are shifting away from traditional support for the Democratic Party. “The Orthodox vote for a conservative candidate, and the secular are also voting more in our direction,” he said. “It’s evolving and I believe there is an opportunity.”

Blakeman puts himself to the right of the Republican center and describes his views as “free market fiscal conservative” and “security hawk.” But he also stressed that he holds moderate views on social issues. These include support, with certain limits, for abortion rights. He is also willing to entertain ideas on immigration reform, but only after he judges the administration to have made U.S. borders secure.

In April, Blakeman was recognized by the National Republican Congressional Committee’s “young guns” program as being “on the radar,” a status that provides him with financial help from the group of young GOP leaders headed by Cantor.

Kwasman’s race in Arizona, against incumbent Democrat Ann Kirkpatrick, won some national attention when the GOP targeted the seat as one they’d like to win over in November. Political watchers have rated the race a toss-up, and both national parties are investing significant resources to help their respective candidates. Despite Kilpatrick’s incumbency, the district is viewed as largely Republican.

“I’m a practicing member of the Jewish faith,” he told the audience at one local candidates forum in May, according to the website guns.com. “Let me tell you, having that experience, knowing what’s happened to my people in Nazi Germany, when they came for the firearms first….it’s what the Nazis did.”

Kwasman also prides himself on being endorsed by Joe Arpaio, the controversial Maricopa County sheriff whose broad crackdowns on undocumented immigrants led to findings of “a pervasive discriminatory bias against Latinos” by the Justice Department in 2011 after a three-year investigation. (Arpaio denied practicing discrimination.)

Kwasman attended Jewish day school and is a member of a Conservative synagogue in Tucson. The district he seeks to represent is made up primarily of evangelical Christians and members of the Church of Latter Day Saints. But Kwasman says he uses the Old Testament’s Leviticus 25 quote, “Proclaim liberty throughout the land to all its inhabitants,” to preach his message of free markets and small government.

In California’s 33rd congressional district, which includes Los Angeles County, a young Jewish Republican is vying for the seat vacated by Jewish Democratic icon Henry Waxman. Elon Carr, a son of Israeli immigrants and an Iraq war veteran, has put his Jewish roots front and center in his campaign. The homepage on Carr’s website welcomes visitors with a family photo overlooking Jerusalem’s Old City, and Carr’s official bio recounts his lighting of the Hanukkah menorah in Saddam Hussein’s palace in Baghdad during the Iraq war.

But while the district has a large Jewish population it is also considered very liberal and solidly Democratic. This has led most political observers to dismiss Carr’s candidacy. Recently, however, some analysts have noted disarray in the Democratic camp, which has multiple candidates for the seat and no clear frontrunner. This could play into Carr’s hands, say these observers, who note that the Republican had the most votes of any candidate in the June 3 primaries. Carr has maintained a centrist approach in his campaign and prides himself on obtaining endorsements from Democrats.

Micah Edmond, another Jewish Republican trying his best in a Democratic locale, has also taken a moderate tone in trying to win the vacant seat of retiring Democrat Jim Moran in northern Virginia’s 8th district. Edmond, an African-American, was adopted by a Jewish family as a teenager and decided to convert to Judaism. He served in the Marines Corps and later worked on Capitol Hill, where he was also president of the Congressional Jewish Staffers Association.

But Edmond’s chances in the district, which includes the suburbs of Washington, D.C., are viewed as slim.

A Handful of Jewish Republicans Runs Far to the Right