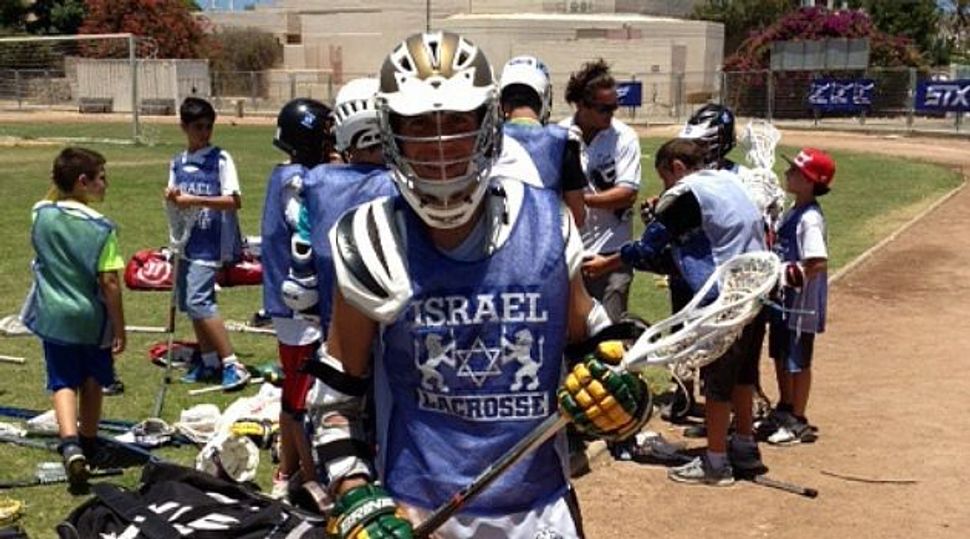 That’s the story, more or less, behind Israel Lacrosse, a not-for-profit organization engaging Israeli boys and girls ages 8 to 18 in the sport. Neiss, who worked as a general manager for several professional lacrosse teams in the States, founded the group in 2010 following his Birthright trip.

“Lacrosse gave me a purpose to come to Israel,” Neiss said.

Lacrosse, which enjoys wild popularity in parts of the United States, involves a rubber ball and stick with a pocket at the end with each team aiming to score more goals than its opponent. Even though Israel has a national lacrosse team, most Israeli children with whom the group works have never heard of the sport, much less have held a lacrosse stick.

“Kids have never seen anything like it before,” said Noah Miller, director of development and social responsibility for Israel Lacrosse.

Without reliable access to grass fields, the program is scrappy, utilizing green space and schoolyards, or basketball courts and gyms, to give children room to learn the game. Practices are conducted regularly in English, Hebrew and Arabic; players on the field observe Judaism, Islam and Christianity. Boys and girls play on separate teams.

“I like to think of us as social entrepreneurs,” Miller explained. He described how lacrosse is being used for community development to reach marginalized youth.

In order to capture the imagination of young Israelis, the organization goes into schools, community centers, children’s homes and orphanages and introduces them to the game.

“On a typical day, we will go into a school in the morning to teach a P.E. class,” Jacob Silberlicht, one of Israel Lacrosse’s program directors, told the Forward. “We bring lacrosse sticks and teach children the basics of the game. Later in the day we have our ‘chug,’ or after-school program. This is when we have practice for our youth team.”

Today there are 200 boys and girls playing lacrosse in Ashkelon, a coastal city in Southern Israel.

“We have a very strong presence in Ashkelon,” Miller said. “We are going into schools every day, providing mentorship and getting lacrosse in as part of the daily curriculum.”

Miller also mentioned that many of the players in Ashkelon come from impoverished families, and that lacrosse provides an outlet for the area’s Ethiopian, Russian and Moroccan youth to play alongside one another.

“We use this game to energize the demographic that’s really in need from this kind of mentorship” Miller said.

Ashkelon is also about 10 miles from Gaza and is sometimes the target of rockets launched from the territory, many of which are intercepted by Israel’s Iron Dome system. In the city, a siren signals an impending attack, and many of the young Israelis who live there have spent time in bomb shelters.

Matt Cherry, a Dickinson College graduate and Pennsylvania native who made aliyah a year ago, is now a program director at Israel Lacrosse. Cherry recounted an incident this past December, right before what was many players’ first match ever, when his team had to take shelter in a community center. After 10 minutes, the squad was out on the field.

All of Israel Lacrosse’s staff members play on the country’s national team, largely comprising members from the Jewish diaspora. The group leverages that prestige to get would-be athletes interested. It also gives them a tangible goal for which to aspire.

Miller is one player on the national roster who runs a high school coexistence program in Jaffa for Jewish and Arab players. Growing up in Vermont, Miller, an American, had played lacrosse for most of his life, eventually taking his talents to the University of Vermont team. Following his college graduation in 2010, Miller donned a blue-and-white jersey for the Israeli national squad. Ultimately he chose to quit his desk job working in corporate leadership development and to make aliyah to help the country’s youth program grow.

Israel Lacrosse also makes a concerted effort to engage the American Jewish community with its organization; for many young Jews in the States, lacrosse is an inextricable part of their identity. The group relies heavily on equipment donated through drives, and young American Jewish lacrosse players travel to Israel to partake in service learning projects with the group. Many lacrosse players have adopted the cause for their bar and bat mitzvah projects, helping Israel Lacrosse reach more would-be athletes.

Come September, the organization will begin programs in Netanya, Haifa and Ramla, a city in central Israel.

“I see a bright future for lacrosse in Israel,” Silberlicht noted. “You can see it in kids’ eyes when they pick up a stick for the first time, that they are not going to put it down.”

Danielle Schlanger is a graduate student at Columbia University. Her freelance work has appeared in The Huffington Post, the New York Daily News, the New York Post, Business Insider and in The New York Times blog on Fort Greene and Clinton Hill.