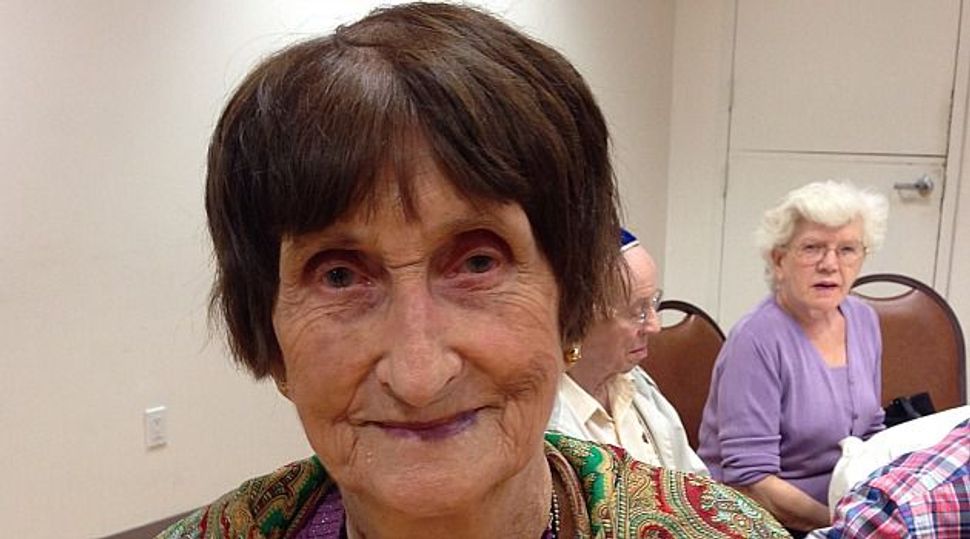 Ninety-year-old Sonia Anger survived the Nazis by fleeing Romania after the Germans invaded in 1941 and taking refuge in the Ural Mountains. Today, the brown-haired, 5-foot-6-inch widow struggles to survive in New York City on a monthly Social Security check of $1,130, or $14,000 a year.

“I’m sweeping the floor, and have little to eat, and I have no new clothes,” she said.

It’s a different kind of struggle to be sure. Anger receives some help in the form of social services funded by German government reparations. This includes the meal and musical entertainment she was enjoying at a Brooklyn coffee house program sponsored by Selfhelp Community Services while speaking to this Forward reporter. German reparations are a crucial means of support for many survivors in America living below the poverty line.

In the New York region — where at least one-third of all Holocaust survivors in America live — “55% of Holocaust survivors (approximately 40,000) can be considered ‘poor’ because they live below 150% of the federal poverty thresholds,” according to Pearl Beck, director of Geographic Studies for the UJA-Federation Jewish Community Study of New York: 2011.

On July 8, board members of the Conference on Jewish Material Claims Against Germany, the organization that distributes the German government’s reparations payments to survivors, will gather in Midtown Manhattan for their annual meeting, just a 45-minute subway ride away from the Brooklyn Selfhelp center Anger attends.

A major point of debate at their gathering will be the Claims Conference’s own future. Two special review committees appointed by the board are due to deliver reports meant to follow up on findings of corporate misgovernance last year by the organization’s own ombudsman. According to a JTA report, the two committees will recommend that the Claims Conference negotiate with the German government for further funds in the future, even after the last survivor dies, to be used for continuing Holocaust education and commemoration.

But what about the disproportionate poverty in which Holocaust survivors are living now?

The Claims Conference did not respond to a request by the Forward for the board meeting’s agenda, making it impossible to report how much of the meeting will be devoted to this problem. But interviews with several of the Claims Conference’s present and past board members reveal disparate views on how the group should deploy its assets to better mitigate the high poverty rates among its prime constituents.

One thing on which all appear to agree is the futility of raiding the Claims Conference’s own standing assets, valued at more than $500 million. These assets, much of them in the form of European real estate formerly owned by Jews or Jewish institutions, are held separately from the ongoing revenue stream the group receives from the German government to make reparation payments. The organization obtained most of these assets through negotiations with the German government after East Germany and West Germany reunited.

Max Liebmann, a former board member, defended the Claims Conference’s determination to hold on to these reserves even though the German government and the governments of several other countries continue to channel some $250 million on average per year to the organization for the continued support of survivors. Among other things, the survivors’ needs in the coming years will only escalate as their frailty increases with the passage of time, Liebmann said.

“The Claims Conference really doesn’t know how long it will need the money for,” he said.

In an email correspondence, a Claims Conference spokeswoman wrote that spending its assets too quickly would force organizations receiving support to cut services.

“To spend all the money now would increase services in the very short term and then result in no money left, leaving the neediest Nazi victims — who will be older and more frail — desperate and with no possibilities,” wrote the spokeswoman, Hillary Kessler-Godin.

It is an actuarial fact that survivors, with their increasing needs, will continue to live for many years to come. Demographic projections anticipate they will continue to need support through 2030.

Much of the German money used to assist them comes not from the Claims Conference itself but from other organizations that it funds. In 2012, in addition to some $345 million in direct compensation the organization distributed as cash payments to survivors, $330 million went out as grants to other Jewish organizations. Most of these groups provide social services directly to survivors. A significantly smaller portion was devoted to education and commemoration ($18 million in the current year according to JTA). If the board agrees at its coming meeting to refocus its long-term efforts on education, that smaller portion will likely grow as a percentage of expenditures as the last survivors die.

Sidney Zoltak, a board member who is co-president of the Canadian Jewish Holocaust Survivors Association, said he and other survivors are disappointed that affluent local communities don’t provide more support for Holocaust commemoration and education. “As far as I’m concerned, they should be paying the whole bill” for that, he said.

The friction on the board is evident.

“It’s a debate we continually have — to use it all for social services or to use some to preserve the memory,” said Raymond Schrag, another board member and president of Selfhelp.

While the debate continues, survivors like Anger remain in need.

“Do they get enough assistance? If they didn’t have the Claims Conference they wouldn’t get any at all,” Zoltak said.