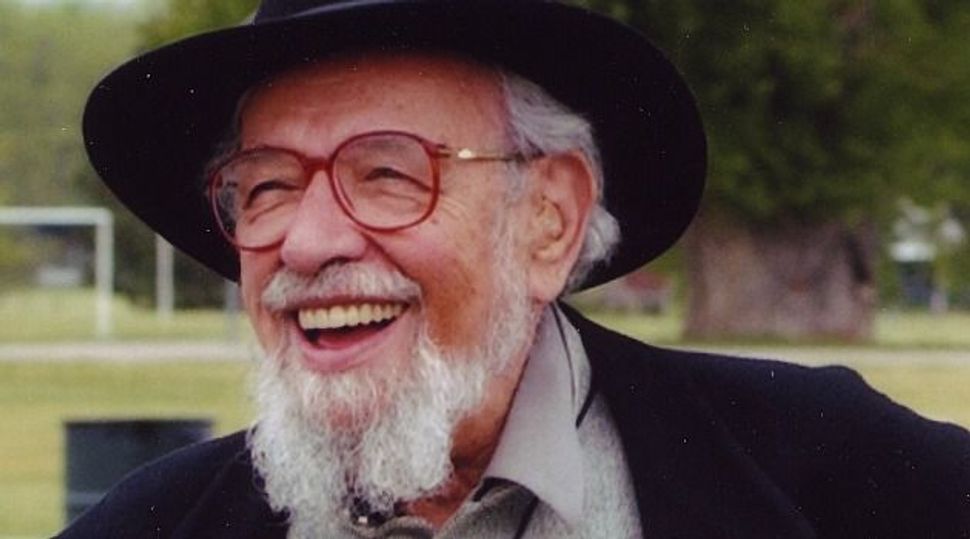 I last spent time with Reb Zalman a month ago, during Shavuot at the Isabella Freedman Retreat Center. He looked and felt like all of his 89 years — and he told us as much. As in “The December Project,” his collaboration with Sara Davidson on the late years of life, Reb Zalman was entirely clear-eyed about nearing the end of his life.

It was hard to hear, but also strangely comforting. Here was a teacher dying the way he had lived: with intentionality, honesty and lessons for us all.

Let’s not turn eulogy into hagiography. Reb Zalman’s was a messy life, full of blessings and challenges, love and heartbreak. But it was also such a full life, with such an impact on so many people, that even in these early hours, as the magnitude of the rabbi’s passing has yet to fully set in, the grief I feel is intermixed with gratitude. This was truly a life well lived.

Others in these pages have already surveyed some of Reb Zalman’s fascinating biography and remarkable accomplishments: the teenager’s turn to Hasidism, the war years, the relationship with and later separation from the Lubavitcher Rebbe and, most importantly, the five decades of innovation in the Jewish Renewal movement. I will leave the analysis to them, and to history.

My contribution to his memory is personal. When I first met Reb Zalman, I was a repressed, closeted Orthodox-practicing law student at Yale. I lived just a few doors from the Hillel, and after debating back and forth, decided to go hear what he had to say. Little did I know that he’d be splitting us into pairs and “inviting” us to say the Shema while staring into one another’s eyes, replacing our partner’s name for “Israel.”

Needless to say, it would be awhile before we met next.

When we did, in 2002, Reb Zalman had already had a powerful influence on my life, often without my knowing it. The Judaism I came to practice was, in large part, the Judaism he helped create: participatory and progressive, yet still committed to the powerful spirituality of traditional Jewish communities. Although Jewish Renewal is often stereotyped as “New Age,” it actually is quite uncompromising, refusing to sacrifice either progressive politics (in the broadest sense of the word) or the spiritual power of Hasidism and Kabbalah. Practice both-and, it insists.

As I gradually drifted away from Orthodox practice, it was Renewal that offered an alternative. I had been raised Conservative, but found little “deep” spiritual practice in my home movement — especially in the first decade of the millennium. Reform never appealed to me personally. Only Renewal and Reconstructionism, the two intertwined mini-movements of American Jewish innovation, offered a replacement for immersive Orthodoxy. Meditation; creative ritual; thick pluralism; sex-positivity; personal introspection and transformation; a community of seekers. The expressions of Judaism which Reb Zalman pioneered enabled me to envision a Jewish life outside of halachic practice, and provided contexts for healing I hadn’t even known I needed.

So by the time we met (again), it was Reb Zalman who had created the conditions for us to do so. And for the next twelve years, I was honored to call him my teacher, and a kind of spiritual friend. Reb Zalman would Skype out of the blue to ask about Frankism (my dissertation topic) or to pitch a project to Zeek (the magazine I co-founded). And this past year, he affirmed my rabbinic ordination (also via Skype). One of my first acts as a new rabbi was to assist at the Shavuot retreat where he gave some of his last teachings.

My story is particular, but hardly unique. Hundreds of teachers, rabbis, cantors, and Jewish leaders likewise found in Reb Zalman’s “translation” of traditional Judaism into contemporary life a way to savor the blessings of Jewish life and practice, while consciously confronting those aspects of Jewish tradition which needed to be renewed — or discarded outright.

Renewal is hardly the only way, of course. But it is a unique way, and uniquely suited to those in search of personal growth, spirituality, and a taste from the orchard of Jewish mystical traditions.

And like Reconstructionism before it — which has now thoroughly pervaded non-Orthodox Jewish theology — the impact of Renewal is far greater than the movement’s numbers. Reb Zalman once called Renewal Jews the “advance scouts” for the wider Jewish community. Some experiments succeed, and others fail. But one of the core principles of Reb Zalman’s neo-Hasidism — that ritual and spiritual practice is meant to be a mode of self-exploration and self-transformation — has permeated Jewish life.

This is deeper than whether a shul has a meditation minyan or not. It is about what questions we ask of our Jewish lives. For those of us who turn to Jewish text, tradition, or practice to inform our lives, what do we go looking for?

Since this is a reflection at the time of my teacher’s death, the coincidence of that timing is also inescapable; Reb Zalman’s passing comes in the wake of brutal violence suffered by, and inflicted by, our brothers and sisters in Israel. Reb Zalman didn’t speak often about Israel/Palestine, and maintained relationships with settlers and peaceniks alike.

But to a great extent, the Judaism he proposed was an alternative to both camps. Settler-Judaism maintains the fierce energy of Jewish commitment, but without progressive politics; progressives often live up to Jewish prophetic ideals but sometimes at the expense of spiritual sustenance. Both-and, Reb Zalman insisted, translated, protested, innovated; both-and. His memory is already a blessing.