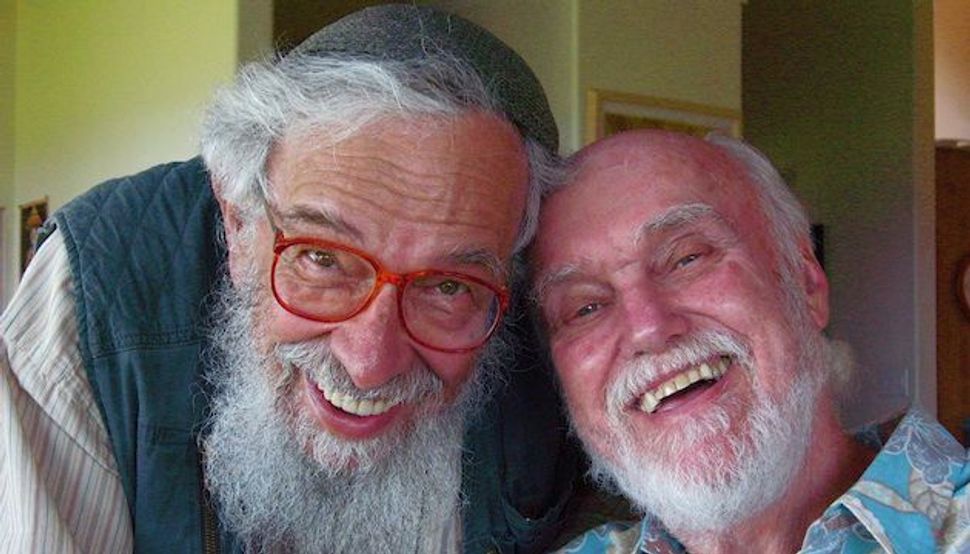 Rabbi Zalman Schachter-Shalomi, one of the important Jewish innovators in postwar America, inspiration to a generation and ecumenical spiritualist, died on July 3 aged 89.

A tireless organizer and spiritual architect, Schachter-Shalomi single-handedly created a new form of Jewish practice and spirituality known as Jewish Renewal, founded on the idea of Gaia consciousness: the notion that the earth is a living organism and that human civilization needs to construct religion to frame its responsibility to the planet. He developed a theory of eco-kashrut that incorporates environmentalism and animal rights as an integral part of Jewish dietary practice.

At times he found himself at the nexus of influence and at times he put himself there, but Schachter-Shalomi used his friendship with two Lubavitcher rabbis, a number of Sufi sheikhs, the leaders of the 1960s counter-culture and a clutch of colleagues in university professorships to bring the intensity and passion of the fervently religious, the insights of spirituality and the openness of the counter-culture to the practice of progressive religion.

He was born in Zhovkva, Poland (now Ukraine) in 1924 and raised in Vienna. Receiving a traditional Jewish education, he was exposed both to Hasidic and to non-Hasidic Judaism, as well as secular studies, during his youth. Staying ahead of the Nazi occupation, as a teenager he spent time in Antwerp in Belgium where, in 1938 working as a diamond cutter, he met an extraordinary group of free-thinking Chabad Hasidim who exposed him to the spiritual resources of Hasidic Judaism. Inspired by their intense devotional, intellectual and experiential practice, Schachter-Shalomi committed himself to pursue the spiritual resources of mystical Judaism.

In September 1941, when he and his family were waiting in a French internment camp for visas to America, he met a young Rabbi Schneerson, who would later become the seventh Lubavitcher Rebbe. Schneerson was invited to give a guest class at the makeshift yeshiva where Schachter-Shalomi studied. Taken by the power and charisma of this young Hasidic yet modern-looking rabbi, Schachter-Shalomi vowed that he would seek out Schneerson’s father-in-law, the sixth Lubavitcher Rebbe, when he arrived in America.

Yosef Yitzchak Schneersohn had recently established his Hasidic court in Brooklyn and Schachter-Shalomi became a part of the growing Habad community, receiving rabbinical ordination from the Central Lubavitcher yeshiva in 1947. In 1948 he was summoned by the Rebbe and sent, along with a young yeshiva student named Shlomo Carlebach who would later become a celebrated musician, to a Hanukkah party at Brandeis University in 1948. Lubavitch outreach missions are now ubiquitous, but this was one of the first.

For over a decade Schachter-Shalomi was a Lubavitch emissary in the Northeast. During the 1960s he became part of the spiritual center of the American counter-culture. He collaborated with Ram Dass (Richard Alpert), Timothy Leary, Allen Ginsberg and other like-minded poets, artists, theologians, and mystics. At that time he also began experimenting with psychedelic drugs to expand his spiritual horizons. This brought him to explore monastic Christianity, Sufism, Buddhism and Native American religions. He sought out and developed lasting friendships with many spiritual masters of those and other traditions including the Trappist monk Thomas Merton, Daniel and Philip Berrigan, Imams and Sheikhs in Jerusalem and Hebron, and most famously the Dalai Lama. His relationship with the Dalai Lama is featured in Rodger Kamenetz’s book “The Jew in the Lotus.”

Schachter-Shalomi moved between academic and more inspirational posts until the mid-1970s when his attention turned almost exclusively to the development of what would later become known as Jewish Renewal. In 1975 he assumed the position of Professor of Jewish Mysticism and Psychology at Temple University in Philadelphia where he taught until he took early retirement in 1987. While in Philadelphia he also founded Bnei Or (Children of Light), later changed to Pnei Or (Faces of Light), a New Age Jewish spiritual society of religious experimentation that was the germ-cell of what later became Jewish Renewal. He was also instrumental in the founding of the neo-Hasidic Havurah Movement centered in Somerville, Massachusetts, and the Aquarian Minyan in Berkeley, California. In 1995 he moved to Boulder, Colorado, to assume the World Wisdom Chair at Naropa University where he taught until his retirement in 2004.

Not since Mordecai Kaplan’s founding of the Reconstructionist movement has an American Jewish spiritual leader offered as detailed and as systematic a vision for Judaism in the twentieth century. Part of Schachter-Shalomi’s project is founded on his belief that exploring the untapped commonalities between religious traditions and spiritual practices would both enhance Judaism and move human civilization further toward overcoming oppositional barriers. His interest in other religions pre-dates the New Age phenomenon that emerged in the early 1970s. At Boston University he met and studied with Howard Thurman, a radical African-American activist and theologian whose influence Schachter-Shalomi recalled throughout his life. New Age religion later became a lens through which Schachter-Shalomi more deeply explored creative ways of crossing spiritual boundaries while keeping his own spiritual tradition intact, albeit transformed.

Jewish Renewal adopts a belief in the Aquarian Age, an idea that human civilization is now experiencing a radical transformation of consciousness. Schachter-Shalomi believed in adopting and sharing spiritual traditions in order to create a world where distinct religions remain but are integrated with one another. Adopting Buddhist meditation, Gregorian chants and Sufi zikher to Jewish prayer, Schachter-Shalomi sought to broaden the possibilities of Jewish spiritual life.

The popularization of his thought through the 1990s and 2000s extended his influence far beyond the relatively small Renewal communities in North America and Israel. Ritual experimentation, meditation, yoga, liturgical innovation, ecologically-conscious kashrut, and new contemplative and liturgical music have become common in Jewish communities outside Renewal. Participants do not always know the extent to which their practices have been shaped by Schachter-Shalomi’s innovations decades earlier. Rabbis and leaders of all Jewish denominations have learned from his pioneering practices and adopted what he called “organistic Judaism.” His influence is even felt in certain ultra-Orthodox circles, especially in Israel, and in his last years he spent time counseling young Jews who had abandoned their ultra-Orthodox upbringing and helped many of them find a path back to a different form of Jewish spiritual life.

As one who barely escaped the Holocaust and lost his brother to the Nazis, Schachter-Shalomi viewed the Holocaust in cosmic terms. He believed that the Holocaust ushered in a new era of human civilization that required Jews and others to reach out toward one another and not retreat into fear and mistrust. He espoused what he called a “post-triumphalist” vision of Judaism that viewed divine election as a concept necessary for the “old paradigm” but no longer necessary after the paradigm shift. His call to universalize Jerusalem soon after the Six-Day War in 1967 is one example of how he put his post-triumphalist Judaism into practice. In the years following the Six-Day War, Schachter-Shalomi visited and prayed with Sufi sheikhs in Jerusalem and Hebron at a time when that was unheard of. As a result, he gained the respect of many Muslim religious leaders, with whom he shared wisdom.

Schachter-Shalomi leaves behind not only a large literary oeuvre but many devoted acolytes, followers and admirers who continue to develop and expand his idea of a global Judaism that seeks to bring Jewish wisdom to the world. He left behind a robust institution called Aleph: Alliance for Jewish Renewal that includes a rabbinical school, cantorial school, lay leadership programs, young adult training programs and many series of seminars and retreats in spiritual development. A meticulous collector and cataloger of everything from obscure Hasidic niggunim to his own writings and projects, in 2013 Schachter-Shalomi gave his extensive archives to Colorado University in Boulder. Containing thousands of documents, recordings, and artifacts, this archive will be used for future research into his contribution to 20th century Judaism. Historians of Judaism are likely to view Jewish Renewal as one of the most important developments in postwar Judaism in the Diaspora.

Schachter-Shalomi is survived by his wife Eve Ilsen, eleven children from three previous marriages and thousands of devoted students. May his memory be a blessing for all of humanity.